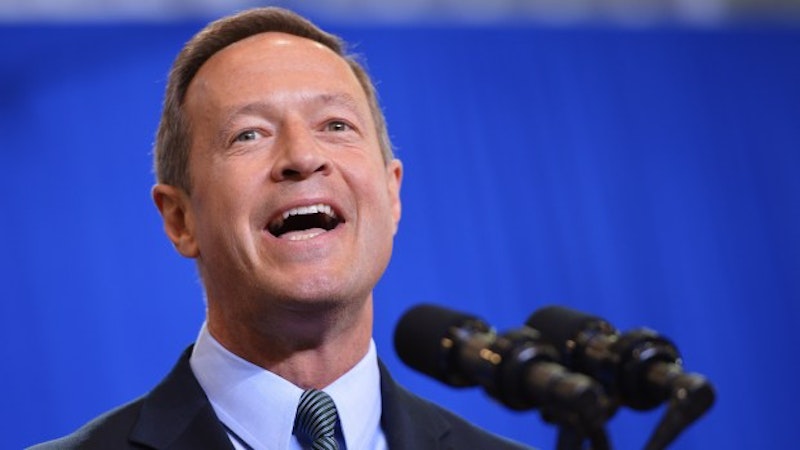 It’s swell to have at least one friend, as Maryland’s Gov. Martin O’Malley must’ve figured upon reading an op-ed endorsement in The Baltimore Sun of his 200-1 shot at capturing the 2016 Democratic presidential nomination. It’s better than getting the cold shoulder from full-wallet donors who’ll do a curtsy for Hillary Clinton but won’t return O’Malley’s phone calls.

On April 16, former Baltimore County Executive Ted Venetoulis—this was a long time ago, in the 70s, and he’s moved on to publishing and other civic ventures, including a failed bid to buy The Sun from Tribune Co.—wrote what on face value was a sincere and overly enthusiastic mash note to the term-limited Governor, and if it was short on facts, well, give the septuagenarian a pass. I think Venetoulis is actually more excited about the prospect of a Marylander taking the White House than O’Malley in particular, but he really lays it on thick.

Conceding that, “[E]veryone on the planet knows [the nomination] belongs to Hillary Clinton,” Venetoulis nevertheless enumerates the countless reasons why O’Malley is King of the Prom. The logic escapes me, but here’s a choice paragraph: “Like him or not, Marylanders should share some pride that our state has produced a national figure who has the chutzpah to flaunt his measly 10 electoral votes in the face of the big guys who run states two or three times larger.” O’Malley, who’s accomplished little as governor besides raising taxes, lagging on the decriminalization/legalization of marijuana, and cozying up to multimillionaire developers is, by my reckoning, a typically hyper-ambitious politician (sort of a pale imitation of Bill Clinton), isn’t especially popular in Maryland, and not just because he often comes off as a flinty, arrogant prick.

Venetoulis claims that O’Malley’s run a scandal-free administration, and though he admits Maryland’s botched health care roll out “perplexed everyone,” he doesn’t even mention the troubles at the corrupt Baltimore City Detention Center, which, on the off chance that O’Malley’s campaign makes it to the Iowa caucuses, will provide plenty of juice for scoop-happy national political reporters. Not exactly a vote of confidence for O’Malley’s law and order plank; for that matter, Baltimore City’s de facto segregation, which O’Malley did nothing to address in his years as mayor and governor, isn’t a selling point either. Local citizens aren’t loons for wondering why Maryland officials lavish tax breaks for downtown developers at Harbor East and Canton, for example, while half the city is still blighted by boarded-up houses, drugs and homicides.

Venetoulis ignores this, while enthusing that if Detroit was lucky enough to have a Mayor O’Malley, the city might not be in bankruptcy. And, we learn that O’Malley is “even shoring up his foreign policy credentials,” perhaps to add to his “astounding press coverage.” Reporters and editorialists at the tut-tutting Washington Post, may disagree with that, but what the hell, that daily’s just an Amazon laboratory at this point.
Venetoulis does offer a “full disclosure” about his friendship with O’Malley. He writes: “I have shared laughs with him, watched him perform with his Irish band and heard him sing "Amazing Grace" with the fullness of a gospel singer. Next to my old friend Jerry Brown, who has done wonders bringing California back to earth, I think he may be one of the country’s best governors.” I wonder what gospel singer Venetoulis has in mind.

I’ve met Ted Venetoulis a few times and in those limited experiences he seems like an amiable, knowledgeable fellow. In fact, in 1978, the weekly I owned at the time, the Baltimore City Paper, endorsed him for the Democratic gubernatorial nomination, figuring he’d at least be more energetic—and in lockstep with the then running-on-all-cylinders Mayor William Donald Schaefer—than his competitors. I remember attending a fundraiser for Venetoulis at Martin’s West that summer, and Jerry Brown showed up to return the chit the candidate earned for backing him in the Maryland presidential primary in ’76 (which Brown won). Venetoulis lost that primary in ’78 to the duller than dull Harry Hughes, a still remarkable outcome. I like Ted: he’s the kind of guy you wouldn’t mind getting buttonholed with for a half hour at a Christmas party.

But this O’Malley malarkey is too much. The Governor is, at best, a mediocre speaker who’s not only boring but given to gaffes. Yet Venetoulis, perhaps confusing him with Bobby Kennedy, says O’Malley’s a man who is “eloquent speaker who can quote poets.” Maybe he tosses off the odd Yeats line—not that I’ve heard him do so—figuring he really can’t quote a famous local: The Wire’s creator David Simon.