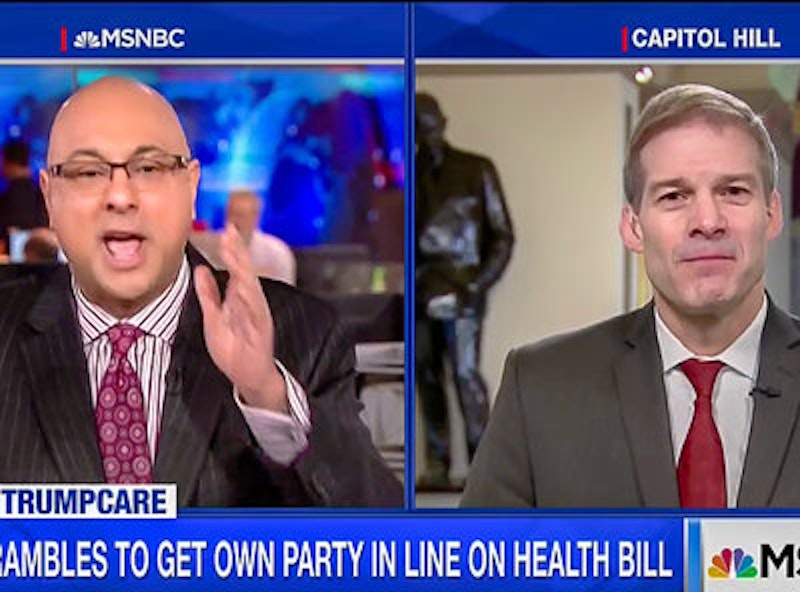 Jim Jordan’s smile looks pained but genuine. He says nothing and neither does the interviewer. The moment hangs there and hangs some more. Finally the interviewer says, “Congressman, good to see you, thank you for joining me.” Jordan’s smile, which started life as a slit, now looks like a rictus. That is, the slit’s still there, but it seems to have gripped the whole center of his face. His eyes are drawing toward each other as if his slit of a mouth were pulling them down. The congressman looks at the camera. “Good to see you, brother,” he says. His head tilts forward. His smile, still in place, swivels toward the floor. He seems to be taking some private appreciation of what the interviewer just pulled on him.

Jordan had been saying that, sure, he understood the need for Medicaid, but now too many people were getting it. The interviewer had boomed at him, calling foul. The alleged offense: Jordan had been citing Medicaid as an example of a successful free-market health care system. Obviously not! the interviewer had cried. Don’t try that! Jordan protested that, no, he was just saying Medicaid had its uses but now there was too much of it. “At least I got you to admit that you sort of like government,” the interviewer said. At that point Jordan’s smile appeared.

The interviewer was a jolly but dominating type. Either trait can be hard to come by on the left. This fellow has them together, even if he could listen more. His name’s Ali Velshi and he’s a Canadian whose family’s Indian and who was born in Kenya. Before coming to MSNBC, he covered business at CNN. Velshi looks good in a pinstripe suit: his shoulders and torso are broad; his head is a clean-lined, majestic egg that bears Glasses of Great Presence. He lives up to his appearance. Watch Velshi with Jordan, and a liberal has the pleasure of seeing common sense belted out. Not only that, but it’s belted out from behind Velshi’s Man-Sized Hands of Reason, the pair of slabs that he stations before his face, one slab above the other, as he nails down logic. Meanwhile, his mouth takes on a  good-humored curl, becoming something like an orange wedge that’s seriously off its bias but looks securely in place. What comes across is a rich enjoyment of the moment without any air of self-satisfaction or superiority. Again, the presence of the first trait can be hard to find on the left, and the same for the absence of the second.

“I have to stop you there, sir. I have to stop you there,” Velshi says. “Because I hear, I hear, I hear this talking point all the time. There have always been higher premiums. Higher premiums every year, and under Obamacare the premium increase has been lower.” And: “Nowhere on the face of the earth is there a free health insurance market that works. If you could point me to one.” And: “People in Canada, people in Norway, people in the United Kingdom, people in Sweden–they don’t all come to the United States for health care. Why do you say that?”

Yeah, why does Jordan do that? He never tells us. Meanwhile, Velshi’s coming back to his bar-room bet. “Just name me one country, one country in the world, where a free market system in health care works,” he says, jolly and loud, one guy to another. This challenge leads into the interviewer’s final contretemps with the Congressman, the misfire regarding Jordan’s thoughts about Medicaid expansion. One has to admit that Velshi goofed there. On the other hand, Jordan never answered the question. It’s one that marks new territory for U.S. television, as far as I know. This stumper, now that it’s on the air, may open useful new lines of inquiry. For starters: if free-market health care works nowhere else, why do we keep expecting it to work here?

For now let me note that Congressman Jordan, a leader of the far-right Freedom Caucus, looks like Stiffler grown up and doomed to life as an insurance salesman. Furthermore, the Congressman’s eyes shift from side to side as if they were crossing a long room; they’re already set far enough apart that a blank zone of flesh seems to be parked above his nose and below his brow. Jordan’s suit looks miniaturized, he has a five o’clock shadow, and his face doesn’t have enough flesh to go around. It ought to look lean, but instead the effect is that he got the face at the same crappy warehouse outlet where he got the suit. Jordan’s haircut is a poser: at first glance it looks ragged and perfunctory, then foppish and expensive on closer inspection.

All these things, plus his hanging grain elevator of a jaw, could make you think the Congressman was dumb. His manner wouldn’t. What comes through is that he’s in the moment: on-message without being programmed, rote without being sluggish. He stays behind his patter like one of those old-time gladiators equipped with a shield just large enough to guard his groin or his chest. Dodging and darting are necessary, and meanwhile his face stays on the alert. His eyes widen to show surprise at Velshi’s bumptiousness. Jordan’s long, lipless mouth looks like a gash, but it’s a living thing. There’s the crimping at the corners when he’s hard-pressed. Sometimes the tip of his red tongue shows itself in the middle of the gash, which has a habit of widening out into a pinched triangle, a distended little pyramid of mouth functioning surprisingly well as a grin.

Then the interview closes. Jordan ponders the way the brown Canadian who loves government just landed on his head. Perhaps he’s thinking that this new age we inhabit has its complications. “Good to see you, brother,” he says at last.