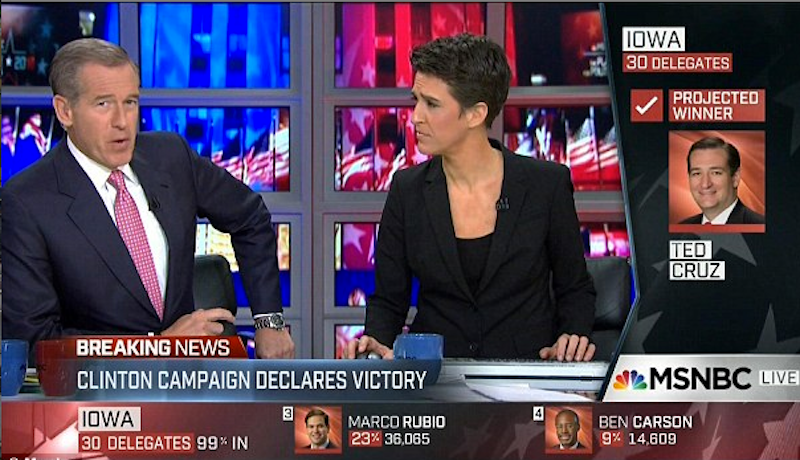 “No, they’re not on camera,” Brian Williams says helpfully. Rachel Maddow is doing the real talking, the interplay with the correspondent who’s pacing the floor of an Iowa gymnasium. But Williams speaks up when Rachel and the correspondent get their communication tangled. The correspondent (Jacob Soboroff) just trekked over with his cameraman to the section of the gym with the undecideds. Rachel hadn’t wanted that; she wanted him to stay put so she could stick with the overhead shot and tell us what each clump of people represented. As opposed to having the correspondent swing into action whenever she mentioned a particular clump. Then, after that, the fellow talked about Martin O’Malley voters and there were none to be seen—not near him and his cameraman, not in the overhead shot of the clumps. Rachel, with a rising note, endeavored to elucidate the situation.

At that point came the off-screen rumble-crackle of Williams and his premier, world-class mellow baritone: “No, they’re not on camera.” Turns out the little cluster is lurking near a wall, not out on the broad floor.

This is what Williams has been reduced to. His broad shoulders are parked next to Maddow and he pipes up when he can be helpful. For instance, while a correspondent resembling an art school instructor (big glasses, sweater, shirt with collar, a wall of curls that sweeps up like a seaside cliff and crests over his forehead) manages to get his feet wrong in giving a tour of an Iowa gym. Williams is assistant desk man on caucus night at MSNBC. If he minds, he doesn’t show it. One has to respect that.

Meanwhile, Fiorina. “Are there gonna be perp walks?” Greta Susteren asks. She’s mad about GM and wants executives to go to jail. Would a Carly Fiorina administration do that? “The game is rigged, Greta,” Fiorina answers. Fiorina keeps hammering that phrase until it’s time to talk about zero-based budgeting, an accounting device she’s been flogging in this campaign. Jimmy Carter tried the same gimmick in 1976, and this cycle Fiorina has it down off the shelf. She explains to Susteren that hatred of the establishment goes perfectly with zero-based budgeting.

Last time’s winner. Subdued but irritable, Rick Santorum asks about what gun he’s supposed to fire. He’s talking to somebody off camera. “A handgun and a, a long gun? What are we doing?” he says. This is at a firing range and the clip opened with the ex-senator firing at a target. “You may not recognize the man with the gun,” the reporter said, “but in 2012 he won the Iowa caucus.”

Santorum is campaigning at a gun show in Iowa but takes questions from WPRI, which is from Rhode Island. He talks with his hands in his pockets, which I think is unusual for a politician. His shoulders are broad, but he seems to be holding them close together. It’s like he’s conserving energy. He’s still going to campaign and snap off his answers to the media—he’s an incisive speaker—but he’s going to do that with what he’s got, which is the little tank of gas an obsessive has left when he’s been campaigning four years and just realized he’s nowhere.

Santorum is mad at Fox News. “You have, you have the main terrorist organization in the world targeting a presidential candidate, calling them an enemy, and Bill O’Reilly says that’s not news,” he says. The reporter, explaining by voiceover, fills us in: “Last spring the terrorist group ISIS included Santorum on an enemies list.” Santorum has this much of a point: if Fox can fuss over some guy who calls himself the New Black Panther Party, it can fuss over an ex-senator’s name on a list. But Fox chose not to, and Santorum is standing there with his hands in his pockets, talking to a reporter and camera crew from New England while his fate in Iowa closes in.

Trump’s vision for contest. Fox News site: “Shark Swallows Fellow Shark Whole in Seoul Aquarium.” Beneath this headline runs a leisurely clip of a big shark floating along with a smaller shark, maybe a baby shark, in its throat. Undersize tail and fin poke from the big shark’s mouth like the victim has been stowed there and now the big shark is carrying it someplace. But not carrying it fast. All the time in the world.