Eyes Off the Prize

We need professors and pundits to lead us into the abyss. 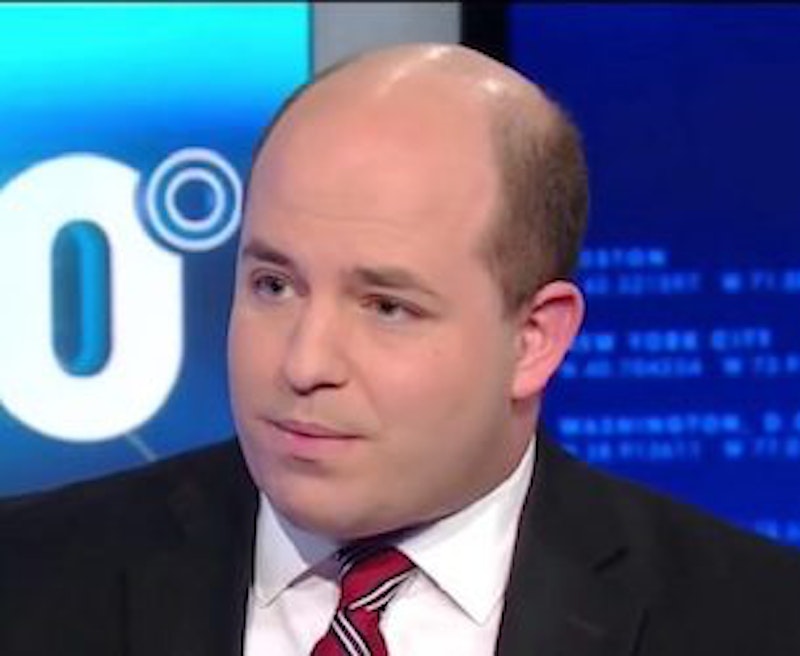 It’s not that the political controversies of the moment don’t matter. I just worry more and more that our ability to get deeply invested in them distracts us from bigger problems, life-and-death problems.

A psychiatrist appearing on CNN went unchallenged by host Brian Stelter as she told viewers Trump may well end up killing more people than Hitler, Stalin, and Mao, though they killed about 15 million, 20 million, and 45 million people, respectively. Now, maybe the psychiatrist meant nukes, which is a risk with any president, though perhaps less so with an anti-interventionist like Trump. That wasn’t clear.

But the debate following the incident was mostly about Stelter’s responsibilities as host in that situation, when it could’ve afforded an opportunity to remind people that socialist and fascist ideas like the ones that motivated Hitler, Stalin, and Mao are still broadly popular and there are thus countless mortal threats on the horizon besides Trump.

Similarly, New York Times columnist Bret Stephens’ bizarre overreaction to one of his (presumably innumerable) critics on Twitter, political communications professor Dave Karpf, calling him a “bedbug”—Stephens notifying the prof’s boss—mainly sparked a debate over whether Stephens is oddly thin-skinned for a Times columnist (and sparked a follow-up column from Stephens likening his critic to a Nazi, which seems like a move a thicker-skinned editor should’ve talked Stephens out of).

But it could’ve been an opportunity to debate whether Stephens’ hawkish, neoconservative, pro-Iraq War foreign policy stance is more mass-murderous and Nazi-like than the mindset of his hapless professor critic.

And dragging Karpf into a fight with Stephens (partly on Twitter and partly on the Times editorial pages, which sure seems like asymmetric warfare) also serves to distract Karpf from his real duties, keep in mind.

He was at the annual meeting of the American Political Science Association last weekend, which means instead of sparring with Stephens, Karpf could’ve been using that time to denounce one of the featured speakers there, the repeatedly-debunked, deceitful, ever more popular Duke historian Nancy MacLean, who has made a politicized second career for herself out of misrepresenting the political origins of libertarianism, finding racism everywhere (don’t tell the non-white libertarians from Hong Kong and Kenya I’ve met, not to mention the heroic original Abolitionists).

Meanwhile, across the Yale campus from Karpf, computer scientist David Gelernter announces that he no longer believes in Darwinian evolution, as if Gelernter has reached any intellectual conclusion in decades that didn’t involve the mopey, “reluctant” conclusion that rationalism and progress just won’t cut it and we need to rely on old-timey intuitions instead. I’d sooner adopt belief in God than the belief that Gelernter has carefully mastered every last possible mathematical equation related to the complex, varied possible outcomes of protein-folding and thus deduced there must be intelligent design in the universe. I think I’ll adopt neither of these beliefs.

But in a sane world, people wouldn’t be asking Gelernter to calculate the odds of there being a God. They’d be asking him to calculate the odds that Jeffrey Epstein, subtly accused of being an intelligence agent by his ex-girlfriend Ghislaine Maxwell, learned math (prior to becoming a math teacher at the Dalton School for a few years) from, yes, Gelernter’s famous attacker, the Unabomber, Ted Kaczynski, back when Kaczynski was a talented young California math professor (as noted in a Mother Jones interview with an elderly Epstein associate)—with Kaczynski himself sometimes theorized to have been driven mad by MK Ultra-style intelligence-sector mind control experiments he is known to have gone through in college. Too weird? Not my fault. Blame historical facts.

(And now I have to hope conservative columnist John Podhoretz doesn’t read this essay, or his Rube Goldberg-like brain may conclude I’m applauding the Unabomber for attacking Gelernter. That’s roughly how Podhoretz’s mind works.)

Meanwhile, if you weren’t worried enough about academics while reading all the above, note two psychology professors from England’s Lancaster University arguing in Newsweek that it’s time we overcame the taboo against cannibalism.

I’m sure some people are tasty—and Hillary Clinton’s former campaign manager, John Podesta, has bragged about having a home at the site of the Donner Party cannibalism incident—but is it not perhaps time to move on from asking why we have all these taboos, inhibitions, and hang-ups and start asking why the elite want to get rid of them all? What are those people up to, exactly, that these rules are getting in their way?

It’s not as if the elite are consistent defenders of pure, uninhibited cogitation, by the way. Crumbling New York City’s next contribution to the cause of mental advancement looks likely to be the annihilation of Gifted and Talented Programs in the city school system. An advisory panel, run by a guy who has recommended to at least two other big cities that they axe gifted programs, has suggested to Mayor Bill de Blasio that the city ditch the programs, since black and Latino kids are less likely to get into them than whites and Asians.

The bigger question, as always, is what New York City voters were thinking when they elected a literal communist, de Blasio, mayor, and whether they think New York City panels on any topic ever will reach a pro-competition, pro-achievement conclusion rather than locking everyone in place at the bottom and calling it justice.

Beyond the realm of the experts and number-crunchers, at least we still have the informal folk-wisdom of comedians, such as Dave Chappelle, who caused a ruckus with his most recent special by mocking about as many groups as he could fit into an hour, plus Michael Jackson for being a probable-pedophile. Some were outraged, especially due to his lengthy bit (gently) mocking gay and trans people. But once more, a sane world would admit that even Chappelle hasn’t made a significant effort here to escape the elite’s new set of taboos.

He made jokes about Jackson, for instance, but half that bit was about saying the kids were probably thrilled and being molested by Jackson is almost an honor. Recall that Chappelle basically fled the country a few years ago to get away from what he claimed were behaviors in Hollywood darker than rape—and in that same stand-up routine from a few years ago, he gave a very extended description of an old organized crime tactic very closely resembling the “honeytrap” that some have theorized Epstein’s sex island was. Lure people into illegal activities, including illegal forms of sex, then control them for life via blackmail.

Maybe it’s all just comedy, or maybe rather than offending the powers that be, Chappelle’s defense of Michael Jackson was his signal to Hollywood that he’s back home and ready to defend their deepest secrets. Maybe we bicker over minutiae, with help from experts with their charts and newspaper columns, while unimaginably horrible crimes occur just offstage, where the real thought leaders, who aren’t all that sophisticated or nuanced, lurk in the dark.