The Truth About the Economy

Republicans lie, but those lies resonate. 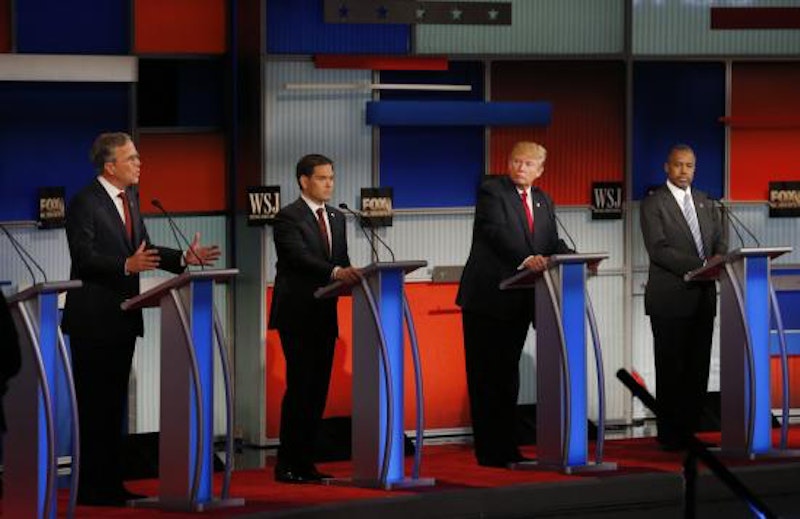 Watching the Republican debates is frustrating for a Democrat. It's not just that the candidates lie shamelessly; it's that they do it so badly. Jeb Bush claims he's going to create four percent growth by repealing all the regulations Barack Obama introduced—and taking us back to the days of his brother, George W., when we had a massive financial and economic collapse. Moderators ask Carly Fiorina to consider the fact that Obama has created many more jobs a month than Bush, and she responds, "Yes, problems have gotten much worse under Democrats." There's not even a pretense of minimally engaging with reality. You half expect the candidates to blame Obama for the ongoing zombie apocalypse. "Thanks to Obama, tentacled aliens have eaten your grandma. You won't see that under a Fiorina presidency!"

Jonathan Chait finds this Republican myth-making both irritating and satisfying. "All the candidates prefer to live in a world in which big government is crushing the American dream, and all of them lack even moderately credible specifics with which to flesh out this harrowing portrait," he says.

In the primaries, all the GOP candidates are going to agree that Obama is horrible. But in the general election, someone (presumably Clinton) will challenge them on that, and they'll be forced to grapple with the inconvenient truth. Which is, as Chait says, that we are currently experiencing something that "looks, at the moment, like peace and prosperity."

Obama inherited an economy in tatters, and he shepherded the United States through a successful recovery. The U.S. has certainly done substantially better post-crisis than Europe. Democratic economic policies appear to have worked, and so Republicans are stuck. They have to admit that things are going well.

Or do they? It's true that people in the United States are unquestionably broadly better off than they were eight years ago. But no one assesses the state of the economy broadly when they vote. They look at their own condition. They say, "Are things going well for me right now?" If the answer is yes, they are happy with the peace and prosperity. If the answer is no, they say, hey, screw this guy who caused the zombie apocalypse; let's vote someone else in.

And how many voters will be see the country as a zombie apocalypse next November? It's hard to say. No one's very good at predicting the economy a year in advance. There could be a surge in growth, or a recession. Who knows?

At the moment though, the economy is middling. Unemployment is down to around 5.1 percent, far below the 2009 high of 10 percent. But wages are still stagnant. Many of those who left the workforce in the recession haven't come back. State and local governments continue to struggle; public sector jobs have taken a hit, as have local services. In Illinois, the state’s budget crisis never ends; the Chicago school system is careening towards chaos or bankruptcy or both.

I think Obama has done pretty well in handling the economy, given GOP obstruction. I'd prefer him to end our various wars, cut the defense budget in half, end ethanol subsidies, substantially raise taxes on the wealthy, and spend the resulting bonanza to expand the social safety net and fund public sector jobs. But none of that was ever in the cards. In any case, I certainly don't trust any of the Republican candidates to do better.

But if the Republicans are liars, the fact remains that Chait's "peace and prosperity" is, in itself, something of a falsehood, even if you ignore America's various ongoing drone wars. Yes, the Republican candidates are spinning fantasies about economic dystopia. But for many voters those fantasies are going to feel more viscerally true than Chait's assurances that all is well in this best of all possible Democratic administrations.