Doc Carson and the Amazing Test

An adventure in truth with the GOP's moral leader. 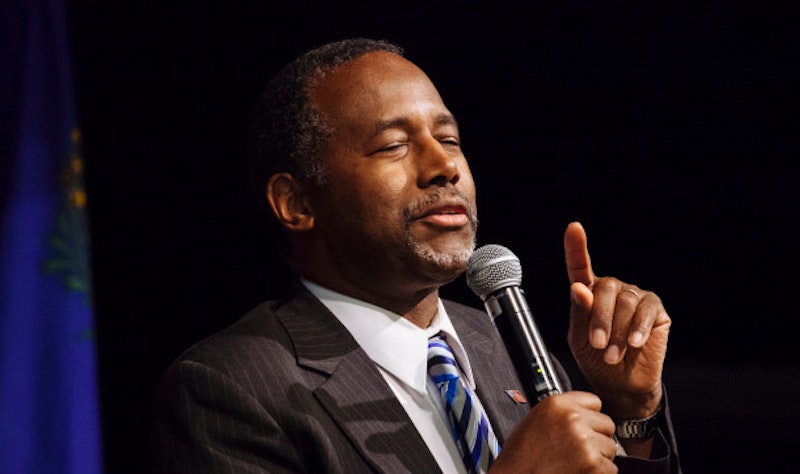 The Yale hoax is my favorite Doc Carson controversy. Carson remembers a fake test being given when he was a kid at college. The test was a doozy. His book describes defeated students staggering away in droves. The room emptied as 149 Yale scholars gave up, some of them muttering about how they'd dodge responsibility for their failure. Only Carson was left. The professor, a woman, approached him. She said the test had been designed to show who was the most honest kid in the class. He’d won, and she gave him $10. A photographer took his picture for the Yale Daily News.

That is one wild fake exam. To prove it happened, the campaign posted a clipping from the Yale Daily News, and the clipping proves that a hoax exam was indeed given. “Will an apology be coming. I doubt it," Carson wrote. Next he'll show doubters a desert and a rock and tell them this proves David killed Goliath. His approach leaves out all the interesting parts.

An old Yalie who helped stage the hoax exam says he's “99% certain the way Carson remembers it is correct.” On the other hand, the old Yalie doesn't say a woman posed as a professor, just that somebody on staff at the campus humor magazine proctored the thing. Because, as the fellow tells us, the hoax test was given by students with the humor magazine, not by a professor probing who was honest and who was a shirker.

Neither the Yalie nor Carson's dug-up clip say anything about 150 kids. “Several students” is the phrase both use. Neither mentions anything about honesty or a photographer. Come to think of it, there's no photograph. Carson sang a song about his picture being in the school paper because of the special glory he’d achieved. He shouldn't get by with producing an item about a few unnamed students showing up for a fake test. But he will.

Hillary Clinton told a story about her landing in Bosnia and the non-existent sniper fire she encountered. She can be full of crap, but the crap is banal. Carson's is exotically scented. Note the number of paintings Dr. Carson has of himself. His house is a gallery of them. One shows the doctor with Jesus, the two of them posing together because they're buddies. In the painting, Carson has a stylish face, a handsome set of cheekbones; he looks like he's an ace musician hanging loose. The real Carson looks nowhere near that good.

Ross Perot had paintings of himself, and he looked better in them than he ever did in life. He paid people good money so he could see himself looking like the character lead in a TV movie. Carson is like that too. Good luck, Republicans.