Sean Hannity Has a Secret

Something to hide in a post-ethics world. 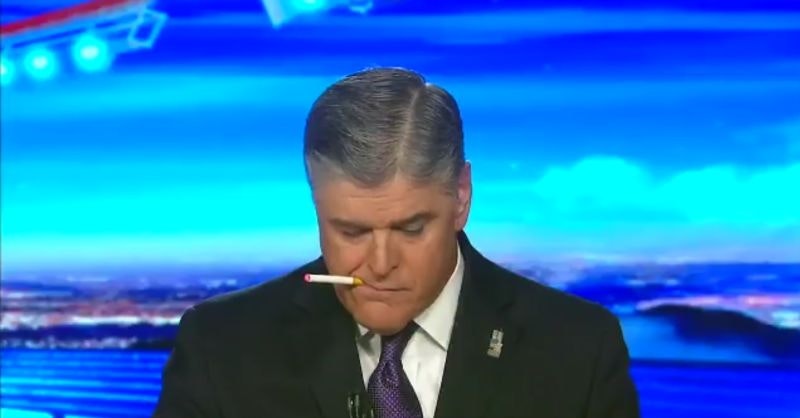 Someplace there’s somebody who’d look at a nudist and ask, “Where is that man’s tie?” This inquiring somebody could write a media ethics column about Sean Hannity, mystery client of Michael Cohen—“a huge story sitting astride media, politics and journalistic ethics,” to quote Erik Wemple at The Washington Post. Also at the Post, Margaret Sullivan sees a do-or-die moment for Fox News: discipline Hannity or give up on being a news organization. Fox declined the challenge by saying it’s all for Hannity.

The ethics people aren’t wrong, of course. Hannity certainly should’ve told viewers that the man he was reporting on was also his lawyer. If, as Hannity claims, Cohen wasn’t his lawyer and they just had chummy, informal talks about Hannity’s real estate ventures, then Hannity should’ve told viewers he and Cohen were friends. Professional ethics require following procedure even when immediate circumstances might not seem to require it. Proceedings are thus kept clean of self-interested mental silt, to coin a phrase. But take the silt out and there’s no Fox News. Brian Stelter in a news analysis (not media ethics) piece at CNN: “People who watch almost any other show would likely feel lied to when they learned something like this had not been disclosed to them, but Hannity's want him to have this kind of relationship with Trumpworld.”

I’ll expand: Hannity’s viewers see nothing wrong about Sean being pals with a Trump pal. Sean is a Trump pal and the viewers are too, in a Junior Woodchucks kind of way. Everyone’s in this together, and naturally the heroes with their head over the ridge get shot at—hence the gun-grabbers’ boycott of Laura Ingraham, or now the media fuss about poor Sean having a buddy.

The viewers are fine. Yet Hannity’s alarmed. Buddy, okay, but no one must think he was Cohen’s client. Cohen’s legal team contacted Hannity this past weekend and he said to keep him out of it. A federal judge had to force his name to be spoken. Since that moment, Hannity has been very insistent that Cohen never once represented him in anything and has never been retained by him or paid by him, and that all they did was talk. “And I assume that those conversations were attorney-client confidential,” he says. One sees the flaw in his position. In fact, when Hannity tried to keep Cohen’s lawyers from naming him, the sole means for doing so was attorney-client privilege. The attempt failed because federal law doesn’t give way to a profession’s particular code.

On air, Hannity has been doing a bit of “Waddabout Stephanopoulos.” It’s a fair point though not a strong one. The ABC anchor should’ve reminded viewers that he used to be a Clinton man; after all he was interviewing James Comey about an election in which a Clinton got shafted. But whatever he said would’ve been a reminder. Everybody already knows about George Stephanopoulos and the Clintons: he wrote a book about it. Hannity was trying to hide his doings with Cohen. Whatever bone he’s worried about might not involve illegality: the court wanted to know Cohen’s clients so that investigators would know which documents not to look at. Hannity isn’t so bothered about the law getting onto his dealings. He’s worried about us, the public. But not because of our sense of journalistic ethics. For another reason.

Cohen’s other two clients—Trump and Elliott Broidy—were rich men who needed mistresses silenced. Hannity has stipulated that no “third party” was at issue in his chats with Cohen. But The Atlantic describes how two other Trump lawyers—Victoria Toensig and Jay Sekulow—squashed an allegation by a female conservative activist that Hannity had been “creepy.” The obvious possibility is that Hannity has something both sexual and gruesome in the closet—not just a mistress, but an abortion or a fetish or a gal’s broken rib—and that Cohen helped stand guard over it. The possibility faces an obvious objection: Cohen has a spotty track record as a fixer, but so far Hannity’s secret remains a secret, so how explosive can it be? But then why is Hannity so nervous? In the murk only one fact swims near: Fox doesn’t give a damn about news. But we knew that already.