The Tea Party and the Confederacy

GOP is nuts, but Andrew Sullivan and James Fallows aren’t far behind. 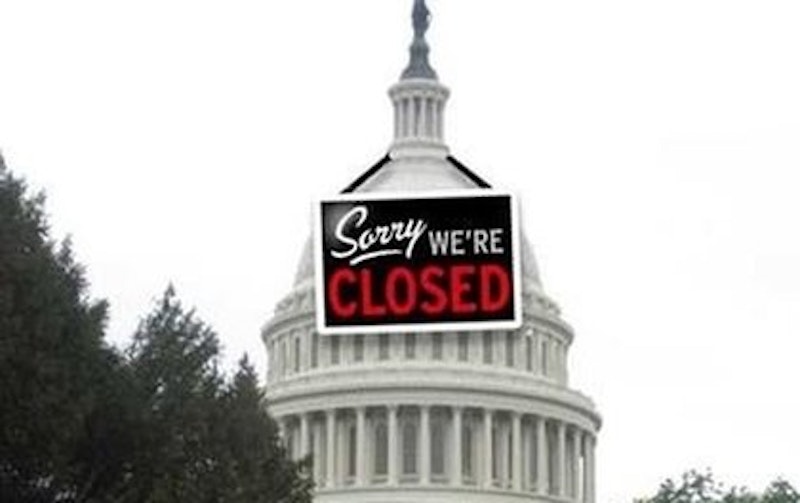 True to form, the House Republicans did the stupid thing and shut down the Panda Cam because they know that cute animals are plotting to get health care for poor people. Later they sat in front of empty chairs hoping that Elijah would come and forgive them all for being so old and white and male and hopeless.

So yes, this is an exercise in partisan dysfunction and stunt-government by a bunch of stupid, short-sighted men and women—or a "barking-mad pack of ideologues," as one life-long Republican put it. In pursuit of no policy goal more coherent than avoiding a primary challenge, one party has decided to inconvenience vacationers, take food out of the mouths of poor children, and gratuitously play dice with what a tenuous economic recovery. You can see why Congress has recently been, as one memorable headline puts it, "Less Popular than North Korea, Cockroaches, Lice, Root Canals, Colonoscopies, Traffic Jams, Used Car Salesmen, Genghis Khan, Communism, BP during the Gulf Oil Spill, Nixon During Watergate or King George During the American Revolution."

It's hard to exaggerate the stupidity and venality of the current Republican House. And yet, pundits seem determined to do so. Specifically, several commenters have made an analogy between the current Republican obstructionism and… well, here's Andrew Sullivan: "But I fear this nullification of the last two elections is a deliberate attempt to ensure that the American system of government as we have known it cannot work."

Sullivan gets over-carbonated easily, but the usually sober James Fallows makes a similar comparison. He writes:

"This time, the fight that matters is within the Republican party, and that fight is over whether compromise itself is legitimate. Outsiders to this struggle -- the president and his administration, Democratic legislators as a group, voters or "opinion leaders" outside the generally safe districts that elected the new House majority -- have essentially no leverage over the outcome. I can't recall any situation like this in my own experience, and the only even-approximate historic parallel (with obvious differences) is the inability of Northern/free-state opinion to affect the debate within the slave-state South from the 1840s onward. Nor is there a conceivable "compromise" the Democrats could offer that would placate the other side."

Sullivan is frothing at the mouth and Fallows is throwing in careful caveats, but they're both essentially linking the current Republican idiocy to the secessionist ideology of the Confederacy.

Again, I think the current Republican Party is stupid and that its insanity is hurting the country. But come on. The deadlock we've got isn’t anywhere close to Civil War. The House is not nullifying our system of government. Republican actions haven't been illegal or violent.  Nothing they've done involves the passage of clearly unconstitutional laws the way massive resistance did, for example. Nor has the House unilaterally abrogated to itself the right to usurp the function of another branch of government. The House Republicans are being thuggish twits, but their thuggish twittery is well within the bounds of our current system.

Fallows' argument that this is basically an internal Republican mess seems accurate. But his suggestion that the GOP is beyond compromise and cannot be influenced by other actors doesn't fit the facts that we've got. The House, after all, backed off its demand to defund Obamacare after the Senate refused to pass it, and settled for pushing implementation back a year. That's not a reasonable compromise, and using budget trickery and threats to try to force the alteration of duly passed legislation is noxious. But you can't say that the GOP wasn't influenced by Senate Democrats. In fact, as Jonathan Rauch points out, in the last few years, "Democrats have accepted spending cuts, Republicans have accepted tax increases, and deficits have come down." Whether or not you think that's a good outcome (I don't, really) it certainly shows that the GOP is in contact and negotiation with the opposition. Rauch is concerned about the Tea Party's antipathy to compromise too, but he's level-headed enough to see that it hasn't destroyed our government yet, and seems unlikely to do so in the immediate future.

The shutdown isn’t good; it's wasteful and harmful, and will get worse the longer it goes on. The situation we've got is bad. But it's not an unprecedented existential Constitutional crisis. I don't see how pretending it is will help anything.