Let's talk sense about the shutdown. 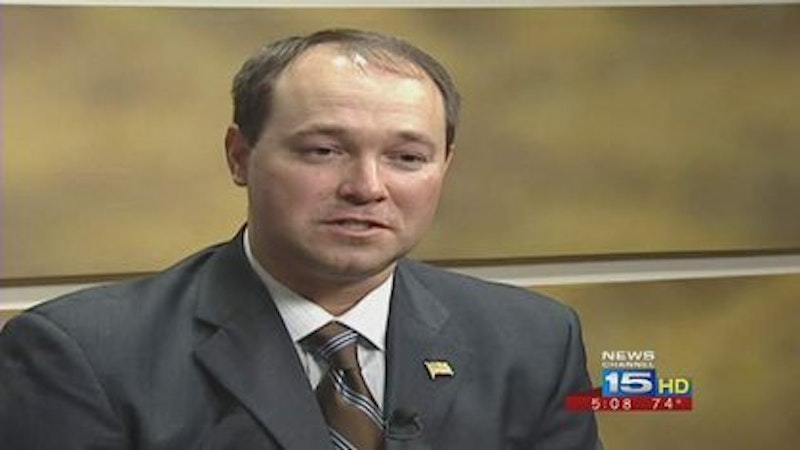 Marlin Stutzman [R-IN] looks like a game show host who's molting into John C. Reilly. He's the Republican who said something dumb about the government shutdown and found himself being quoted by the President Obama. Stutzman perpetrated the quote for a Washington Examiner piece that appeared at 10:55 a.m. Obama's disbelieving rendition of the congressman's remark came along in the next hour, judging by timestamp.

The quote: “We’re not going to be disrespected. We have to get something out of this. And I don’t know what that even is.” Was he taken out of context? Not by Obama. The quote appears way high up in the Examiner piece, along with one by a “centrist” Republican: “This is not just about Obamacare anymore.” The two quotes are treated by the reporter, David M. Drucker, as lead exhibits for his picture of the House GOP's current mindset: Obamacare was for openers, now they want more, much more.

Obama and many others noticed how sweaty, bug-eyed and confused the congressman comes across in his remark. They noticed so hard that Stutzman has already thrown himself under the bus. From his web site: “Yesterday, I carelessly misrepresented the ongoing budget debate and Speaker Boehner’s work on behalf of the American people.” His remark was that bad. Really, it calls for a Homer Simpson reading: charging forward with “We’re not going to be disrespected,” then jumping into Homer's uncanny fluting squeal someplace near “I don’t know.”

It's not like the reporter was up to something. Drucker is conservative and his article plays the right's side of things on its own terms. He just didn't notice anything off about Stutzman's remark. Imagine what he hears day in and day out.

Kind of weak, really crazy. America's best-known right-wing publication is The National Review. Its Washington editor is Robert Costa, and he spends a lot of his time covering House Republicans. An interviewer asked Costa if John Boehner was weak or the House Republicans were crazy. That's a paraphrase, of course. But was Boehner the problem or were House Republicans? Costa said anybody would have trouble leading this bunch. For one thing, he said, “so many of these members now live in the conservative world of talk radio and tea party conventions and Fox News invitations. And so the conservative strategy of the moment, no matter how unrealistic it might be, catches fire.”

As I read this, we now have a substantial number of Congress members who see Sean Hannity as a good source of opinion. They don't just see him as a force to be placated or a loyalist on the right side. If Hannity wanted a word with them, they'd listen because they thought he'd tell them something worth hearing. Republicans have reached the end of the bench when it comes to finding members of Congress. Now they're putting in talk-radio fans.

How did these quarrelsome chumps get elected? Another quote from the interview: “When you hear members talk candidly about their biggest victory, it wasn’t winning the House in 2010. It was winning the state legislatures in 2010 because they were able to redraw their districts so they had many more conservative voters. The members get heat from the press but they don't get heat from back home.”

Leading them is a nightmare, but Boehner is determined to hang on as speaker of the House. According to Costa, that's because Boehner really likes being important. Costa (delicately): “He loves being a major American political figure, but he’s not a Newt Gingrich-like figure trying to lead the party in a certain direction. He’s just trying to survive and enjoy it while it lasts.”

The House Republicans are living inside an echo chamber, they rely on gerrymandering, and their speaker is a stuffed shirt who cares about his job and not much else. Everything liberals want to believe about the situation, confirmed by the man who covers Washington for the magazine that liked McCarthyism and didn't like desegregation. Maybe he should tell Drucker.