This Is Your Government at Rest

John Boehner’s in a no-win situation. 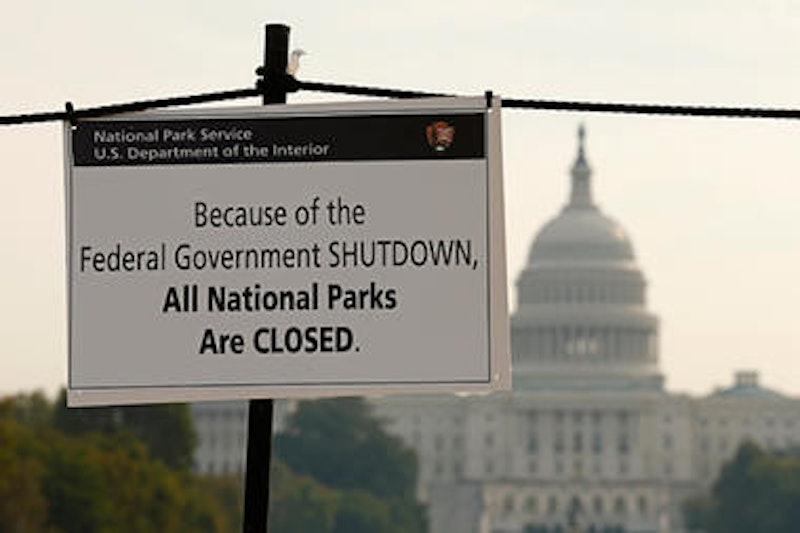 The government shutdown has turned into a public lockout. Kids with cancer cannot enroll at NIH. The House shoeshine stand is closed. Disabled veterans won’t be getting their checks. The CDC flu program is on hold just as flu season arrives. The nutrition program for women, infants and children (WIC) stops abruptly. Meals on Wheels lurches to a halt. The kids in Head Start are neighborhood waifs again. And a 12-room lodge on Cape Cod had to evict paying guests because it’s built on public parkland.

This is your government at rest. And the Tea Party is celebrating having achieved what it came to Washington to do, and that is simply to turn off the lights and make a point. Sen. Ted Cruz (R-TX), the Tea Party pin-up boy who launched the histrionic craziness then quietly vanished, started something he knew he couldn’t finish—the repeal or defunding (they’re they same) of Obamacare. Cruz’s one-man show, the 21-hour mini-me filibuster, achieved the single goal of promoting Cruz’s presidential hopes. The joke’s on America. Only the nation’s not laughing, especially the 800,000 federal employees who are furloughed, 124,000 of them in Maryland.

In the grammar of government, a list of acronyms, bureaucratese and other non sequiturs is tumbling into the nation’s vocabulary—clean CR, sequester, debt ceiling, default. It is important not to conflate them. CR signifies a continuing resolution, which is needed to fund day-to-day government operations because the House has failed to approve a budget. A clean CR is one stripped of unrelated demands. The deadline for a CR passed on Oct.1, the reason government shut down.

Sequester means the austere budget cuts imposed the last time Washington had this fight. Debt ceiling deadline arrives on Oct. 17, the date the government defaults on its financial obligations. It runs out of money and borrowing power to pay its bills unless the arbitrary gimmick is raised, as it has been 47 times since Ronald Reagan was president and seven times under him. (Obama, as a senator, cast a haunting vote against raising the debt limit.) Government is now operating on duct tape and bailing wire.

Both sides are playing hardball. House Speaker John Boehner (R-OH), with a gun to his head and a knife at his back, is trying to sidetrack Obamacare as the extortionate price for extending the debt ceiling. He presented a list of GOP demands longer than a disclaimer on a pharmaceutical commercial. House Republicans are trying a piecemeal approach to budget items to soothe an angry public over their high-handed hostage-taking only to have them rejected so far by the Democratic Senate and the White House.

Obama refuses to negotiate any demand that would undermine his signature legislative accomplishment, parts of which are already in effect. Nor will he allow the debt ceiling to become part of a demand list. Boehner’s grave miscalculation may have been that he expected Obama to cave as he did in the last round of negotiations.

But events are zig-zagging fast, as they often do in tense negotiations. Boehner, of late, has signaled that he will not allow the nation to go into default, a softening of his original bully-boy stance. That means either he’s willing to bring a clean CR to the House floor, or he’s trying to sniff which way the breeze is drifting. The question is: What will Obama give Boehner to save face (and possibly his speakership)?

What’s really at stake is not so much Obamacare as Boehner’s speakership. Nearly everyone agrees that if Boehner brings a clean CR to the House floor it will pass with a bipartisan majority. But the 30-40 House Tea Party members, agitated by Cruz and with the quiet connivance of Boehner’s majority leader, Rep. Eric Cantor (R-VA), are holding Boehner hostage along with the nation’s financial credibility. They refuse to lift the debt ceiling unless Obamacre is repealed, which is all but impossible. No matter who wins, Boehner loses.

The Tea Party’s fear of Obamacare is that it will work. And once a government program takes hold, it becomes part of the nation’s social expectation, or entitlement, just as Social Security and Medicare are now America’s lifeline to old age. The goal of the Tea Party is, simply put, to repeal the New Deal.

Repeal Obamacare is merely a metaphor to the symbol-minded. The core of the crusade—the systematic repeal of entitlement programs as a means of dismantling the Democratic Party—is cloaked in niceties such bringing down the debt and listening to the voices of America. (The debt is dropping dramatically because of cuts in spending and lower health care costs attributed to Obamacare.) The only voice the GOP hears is the bull canary falsetto of the menacing Rush Limbaugh, who has a vast audience of 18-wheeler pilots and wheat-field tractor jockeys. Many of America’s voices wouldn’t know the difference between Obamacare and Tupperware.

As the deities who distribute irony would have it, the ACA is modeled on a plan advanced by the conservative Heritage Foundation that is now bankrolling the effort to repeal the health care plan for the uninsured, which it pioneered. The attack is all the more confounding because the ACA places the insurance plans squarely within the private sector, which is the Heritage Foundation’s goal. It is therefore fair to conclude that the only problem with the ACA, or Obamacare, is that it was enacted under the sponsorship of a Democratic president, and a black one at that.

Consider what the Republican party has become. It is narrow in its thought and limited in its geography, confined to a handful of Southern states and a couple of fly-overs in the Rocky Mountain range. The GOP has become, through the cynical artifice of redistricting, a collection of state parties rather than a national party. It can win state houses and House districts but it can’t win the White House.

There appears to be no coherence to the Republican scatter-gun attempt to dismember the Democratic Party, only the subversive approach that has its root in the Darwinian notion that screwing each other improves the breed. Yet the felicitous convergence of haphazard events is playing havoc with the accepted Democratic social format.

The Tea Party has elevated its primal scream into a hatred of government. Government has always been viewed as the adhesive that holds America together; now it’s become a target to cause its disintegration. Democracy, the poet T.S. Eliot observed, constantly swings between tyranny and anarchy.

Obamacare is intended to provide health care for the 48 million Americans who are uninsured, many of them too poor to afford coverage. One feature of the program would provide care for the marginally poor through Medicaid, the federal-state partnership, at federal expense. Yet 26 states, nearly all of them under Republican control and representing half the nation’s population, have rejected the proffered billions in federal Medicaid funds. The GOP governors have, in effect, denied health care for their own constituents.

At the federal level, House Republicans submitted a list of demands in exchange for funding day-to-day government operations that included many of the entitlement cuts originally proposed in the discredited Ryan budget. The Ryan budget takes its name from Rep. Paul Ryan (R-WI), the 2012 vice presidential nominee and chairman of the House Budget Committee. It would strip the budget of many of its social-welfare programs and ultimately privatize Medicare and Social Security.

In another pincers move, nearly all of the Republican-controlled states are moving in one way or another to restrict voters’ rights which would disproportionately affect minorities, the elderly and the young. The Justice Department has announced that it is moving to counter state actions, beginning with lawsuits against Texas and North Carolina which have adopted the nation’s most restrictive voting requirements.

It’s a fitting coda to note that the capital police received a round of applause from the House of Representatives for protecting them and the building during a possible threat from a troubled woman last week. But the police had been notified earlier that they will not receive their paychecks until the protocol standoff in Congress is over and government resumes its normal operations. Thank you, Sen. Cruz and all the wonderful Tea Party members who brought us the shutdown.