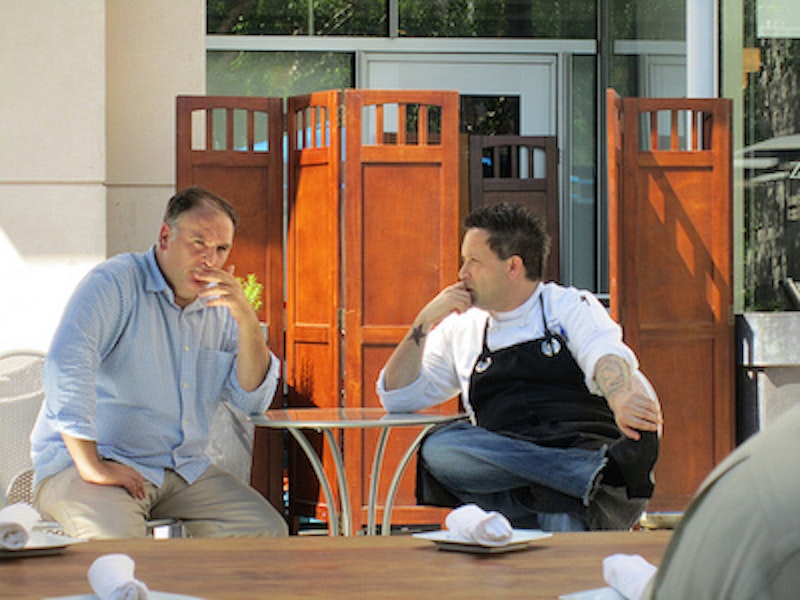 2018 was an eventful year for two of Washington D.C.’s most celebrated chefs: Michelin-starred José Andrés and former two-time Top Chef contestant Mike Isabella. The former earned a Nobel Peace Prize nomination for spearheading a disaster relief effort in Puerto Rico—reportedly the largest emergency feeding program ever set up by a group of chefs—after Hurricane Maria. The fortunes of Andrés’ former employee, Mike Isabella, went in the other direction—he lost a restaurant empire once valued at $40 million, a disaster of his own making that he blamed on “bad press.”

Andrés was undaunted by the lack of clean water, power, and communication when he arrived in Puerto Rico. Before long, his team was cooking 100,000 meals daily at over a dozen locations on the island, despite the fact that FEMA kept telling him he didn’t understand the “process.”

Isabella, 43, made a worldwide name for himself with his swaggering appearances in two seasons of Top Chef, demonstrating formidable cooking chops while gaining notoriety with statements like, “There’s no way—no offense—but a girl shouldn’t be at the same level that I am,” after a female contestant whipped him in a competition. Returning to the reality program for the all-star competition, Isabella attempted to clean up his image. He did a good job of crafting the persona of a talented, tattooed New Jersey bad boy with a heart of gold. The TV exposure brought dozens of investors flocking to the new culinary star.

Andrés, 49, who owns restaurants all over the U.S., arrived at his celebrity status in a more natural manner. He trained under culinary deity Ferran Adrià at his acclaimed restaurant in Spain, elBulli, before moving to the United States in 1991. In 2004, Bon Appetit awarded him its “Chef of the Year” designation. Andrés has taught a culinary physics course at Harvard, and has received honorary doctorate degrees from George Washington University and Tufts University.

Andrés has worked hard to transcend his status as one of the world’s greatest chefs. Isabella, who’s worked hard to become famous, had his character forged in a variety of kitchens, starting in his teenage years. That’s made him a crude, unsophisticated person. Still, he successfully parlayed a TV persona into the ownership of Mike Isabella Concepts (MIC), which once owned over a dozen restaurants, several stands at Nationals Park, and a mammoth food hall at a Northern Virginia luxury mall. Perhaps he foreshadowed his eventual demise in one incident on Top Chef: All-Stars when he blatantly stole one of soon-to-be-winner Richard Blais’ culinary inventions from his competitor’s notebook and used it to win the day’s competition.

You could say Mike Isabella’s main problem is that he doesn’t know where the boundaries are.

It was #MeToo that imploded Isabella’s massive, but shaky, business edifice. In March of last year, Chloe Caras, once a top manager at Mike Isabella Concepts, filed a lawsuit alleging that Isabella and his business partners called her “bitch” and “whore,” taunted her with sexist comments and insults, commented on her buttocks, and touched her inappropriately. She claimed Isabella and his partners visited brothels in Europe and then named cocktails after their exploits there. One of drinks was the Crossing Guard, dubbed after a sobriquet that Isabella had allegedly picked up when, during one debauched bawdy house romp, he’d directed the working girls on which particular acts they should perform on his crew. Isabella settled with Caras for an undisclosed sum.

Instead of apologizing immediately after the scandal broke, an unrepentant Isabella tried to dig up dirt on his accuser and talked about “bad press.” The Washington Nationals and Uber Eats severed their ties, and two of his chefs quit. Eater removed him from its restaurant directory, and he got shut out of culinary awards. That’s how it works now, but the chef obviously hadn’t been paying attention. That’s why he just did a Chapter 7 bankruptcy filing, and why he’s selling the D.C. Wharf-area condo he bought for $2.19 million just before he got sued. Isabella has two restaurants that’ll escape the Chapter 7 liquidation process, but their future’s uncertain.

Both Andrés and Isabella have outsized ambition, but one’s an adult and the other’s an overgrown child. That shortcoming took Isabella almost overnight from prince to persona non grata of the D.C. dining scene. “The business of feeding people is the most amazing business in the world,” Andrés once said. Compare that to an Isabella quote: "Chefs are like rock stars now. We hang out, we do shots, we’re high-fiving, we party, and then we close the place down at 2 or 3 am.” Andrés, a legitimate hero, must’ve been saddened to watch the self-destruction, but he knows that “bad press” wasn’t to blame.

He’ll continue to work at redefining how worldwide disaster aid is administered, while Isabella will struggle to find a way back into the industry, this time in a humbler fashion.