Birthright Tells Me I Don't Belong

By ejecting Jews who question the occupation, Birthright shows that Israel isn’t a refuge. 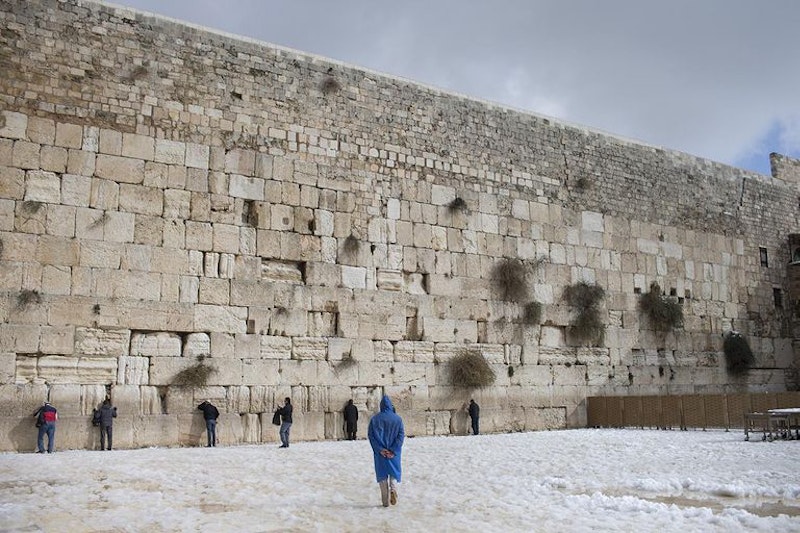 Last week Birthright Israel ejected three young Jews from their Israel trip for asking questions about the country’s policy on the West Bank.  The decision was a PR disaster for Birthright, highlighting the organization's intolerance and its inability to accept or accommodate the political commitments of many diaspora Jews.

More ominously, the incident suggests that diaspora Jewish people with left or radical politics are not welcome in Israel. Birthright is a quarter-funded by the Israeli government, and most of the rest of its money comes from US organizations and philanthropists. The collaborative project is meant to inculcate a sense of belonging to Israel among diaspora Jewish people. But who belongs is predicated on political compromises and presuppositions. For US Jewish people to go to Israel, there must be negotiations and agreements among various stakeholders—which means that "belonging" is conditional, not absolute.

Part of the appeal of Israel to the diaspora has always been that, should fascism rise again, Israel would be a guarantor of safety. But with anti-Semitism increasing across the globe, Birthright's actions, and Israel's, don't make me, as a leftist Jew, feel like I have a home if needed. On the contrary, the message I hear from Israel is that they won't help.

In the past Israel has taken in many Jewish people threatened by violence and anti-Semitism. After the establishment of Israel in 1948, hundreds of thousands of refugees and immigrants from the Holocaust flooded into the country, many coming directly from camps in Germany, Austria and Italy. When Middle Eastern nations forced out Jewish populations who’d lived in the region for thousands of years, most of those people fled to Israel, where they were welcomed.

Supporters of Israel often cite this history as a kind of warning. The world’s a dangerous place for Jewish people; we in the diaspora need Israel as a sanctuary of last resort. Whatever our political differences, we must remember that when no one else is there for us, Israel will be.

But will it? Israel doesn't always take in refugees. It's been notably reluctant to harbor refugees from the ongoing Syrian war, for example, in sharp contrast to Lebanon, which has accepted more than a million people. Israel has also refused to take in refugees from Eritrea and Sudan. These refugees are not Jewish—but Ugandan Jews who want to immigrate to Israel are, and Israel has refused them, too.

Israel’s not behaving any differently from other nations, of course. All states control their borders, and many refuse to take in refugees, for strategic, xenophobic, or racist reasons. Israel’s simply setting its immigration policy based on its estimation of its own national and political interests.

Can the diaspora be certain that its needs and Israel's interests will coincide? The actions and words of Israel's current government don't make me optimistic. Prime Minister Benjamin Netanyahu has demonstrated repeatedly that his right-wing political agenda is more important to him than the safety of Jewish people in the diaspora. Netanyahu has offered support for Steve Bannon, a former White House advisor who works to mainstream alt right, fascist politics in the United States. Netanyahu has also shared and promoted conspiracy theories involving left billionaire philanthropist and Holocaust survivor George Soros. The far right Pittsburgh man who murdered 11 people at Tree of Life synagogue was inspired in part by Soros conspiracy theories. After the shooting, Diaspora Affairs Minister Naftali Bennett fell over himself to deny that there was any connection between the Trump administration’s far right rhetoric and anti-Semitic violence in the United States.

We know that Israel rejects refugees for political reasons. We know that Netanyahu's government considers its alliance with Trump, and people like Bannon, very important. We know that Netanyahu's government is willing to demonize diaspora Jewish people with left political opinions, like Soros, and that it’s reluctant to see links between the Shoah and violence against the Jewish diaspora in the United States. And we know that other Jewish institutions, like Birthright, believe that Jewish people who express opposition to the occupation give up their claim to be part of the Israeli community.

Why should I believe that Israel would take a leftist Jew like me in if Trump were to commission ICE to start deporting "globalists"? Given a choice between supporting Trump and supporting left Jews in the diaspora, Netanyahu has repeatedly indicated that he would much rather support Trump. If the situation for Jewish people worsened dramatically in the US, perhaps Israel's government would reassess. But I wouldn't bet on it.

That's not to single Israel out. I don’t know that Canada would take me in either, or Cuba. History shows that diaspora Jews fleeing violence have few friends, and that all refugees face an extremely precarious future.

Israel, we're told, makes that future less precarious for those of us in the diaspora. But it doesn't. We don't have some sort of guaranteed escape, and it's dangerous to think that we do.