I Am the Bolsonaro of Veganism

When I’m president, eating meat will finally be punishable by death. 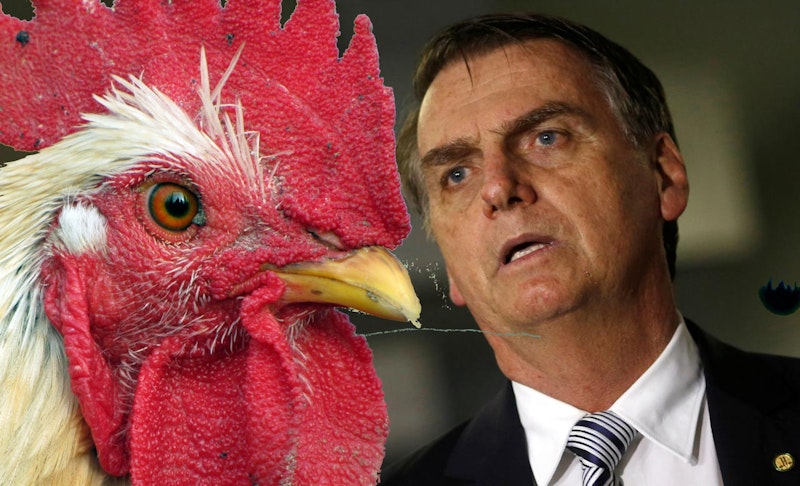 I’d like to announce that I’m forming an exploratory committee in the service of all citizens of America (aka “the States”) to see if I have any shot at running for and winning the presidency in 2020. If you laugh I’ll cut you. If you stand in my way I’ll cut you. If you dare ask the question everyone is apparently compelled to scream at me: “Holy shit… what the fuck… it’s talking?” Yes, bitch. Get ready for lots of it. You thought Hillary was shrill? Just wait. I’m going to dominate you and ride you like a mechanical bull. This is good; this needs to happen. I’m not going to lie to you and say it’s going to be easy, it won’t be. It’ll be bad and the country might even be worse after I leave office in 2036. Look, that’s the way it goes, generally. I’m just being honest with you. Problem? I’m guessing it’s because of my gender. Well guess what, cucks: the future is female. Or feminine or whatever. Fuck you, vote for me.

My platform is based around three central tenets: courtesy, professionalism, and respect. Sound familiar? No? Get used to it. Where have you been? I feel that our society has succumbed to saccharine pleasures and creature comforts at the expense of our national wellbeing. Children in cages? Very bad. Institutionalized industrialized bred to be killed “chickens”? Worse. Yes, I’ll be the first presidential candidate in history to not only advocate for veganism but make it mandatory. I’m the Bolsonaro of veganism. Eating animals will be punishable by death, and false idolatry—such as the disgusting Paddington and Chicken Run films, among many others—will be outlawed. Sharia Law, you say? More like Monica Law. Once again, get used to it.

Don’t be afraid; come to the light. Not that you have much choice, the field is pretty pathetic at this point. Maybe I’ll primary Trump just to flex on him. Might as well. But I really want to lay into Elizabeth Warren, Beto O’Rourke, Joe Biden, Cory Booker, all those fake fucks. Oh, you drink beer, Mrs. Warren? You ever snorted meth off a rhino horn? Didn’t think so. America doesn’t like Trump, but it’s not because of his policies or his behavior, it’s because he sucks at being president. American wants a competent fascist, and I’m more than happy to oblige. Don’t worry socialist snowflakes, my society will look a lot like your precious Mao and his Great Leap Forward. I’m still doing my research so I don’t know exactly how far he jumped but it must’ve been pretty high, considering how many people died because of it. See, this is why candidates form exploratory committees: there’s always something the genius misses. See you in June, bitches.