The Democrats Are the New Republicans

They trick people into voting for candidates who won’t really improve their lives. 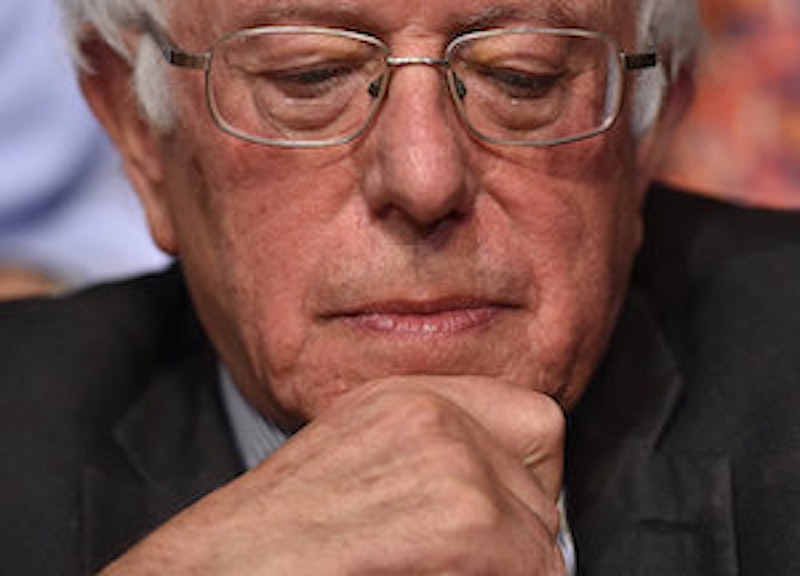 Until recently, I didn't realize that “hard working families”—a hackneyed cliche only used by politicians—is how Republicans and Bernie Sanders signal they’re talking about white people. A white Hillary Clinton supporter who lives comfortably in L.A. pointed this out to me. Establishment Democrats are now lumping socialist Bernie Sanders, who was arrested in 1963 while demonstrating against discrimination against blacks in Chicago, in with Trump and his supporters.

“Ken” told me that all the minority people he knows—I imagine they’re all on Twitter—”abhor” the senator from Vermont. That’s a strong word to use, given his past and his far-left political positions that are tailor-made for minorities, so I asked him why that was. He replied that there are “countless examples,” and referred me to an article in The Root, which describes itself as being a digital magazine that “provides thought-provoking commentary and news from a variety of black perspectives.”

The author, Anne Branigin, quotes Sanders as saying, “Number one, we have got to take on Trump’s attacks against the environment, against women, against Latinos and blacks and people in the gay community, we’ve got to fight back every day on those issues. But equally important, or more important: We have got to focus on bread-and-butter issues that mean so much to ordinary Americans.” She’s upset, even though he said that he wants to fight every day to defend four separate minority groups, because she thinks, “Sanders juxtaposes ‘ordinary Americans’ against women, Latinx, blacks, and the LGBTQ community as if they were different groups.” Are we really to believe that Sanders puts women and black voters in a separate category, excluding them from the “ordinary Americans” who deserve economic relief? Wrong. No Americans are excluded from the ordinary Americans he speaks of.

Sanders isn’t comfortable with identity politics because he’s an old-school leftist who wants people to unite along class, not personal identity lines. Ken, Branigan, and a large contingent of the Democratic Party will never be satisfied with a 2020 presidential candidate who doesn’t cater to the various marginalized communities like Hillary Clinton did. And we know how that worked out. Sanders can talk about ending racism and discrimination, but does anyone believe that will significantly improve people’s actual lives? We just finished eight years under the presidency of a black man, and nearly every week there’s a story about a white person confronting a black resident of their apartment building or calling the police on a black girl who’s selling bottled water without a license. Sorry to burst anyone’s bubble, but no president will ever stop that. What if, instead, a president focused on putting more money in the pockets of marginalized communities and hard-working families?

So I asked Ken if he agreed that the president’s primary task is to improve the economic lives of as many Americans as possible, and, sure enough, he said no. Politics have flipped now. We’ve heard, forever, that the GOP cleverly uses wedge issues to get people to go against their own economic interests, but that’s exactly what the Democratic Party’s now become. Its “wedge issues” are the issues of identity politics. “Take Hillary over Bernie because she talks the talk.”

It’s clear that Wall-Street-bashing Bernie Sanders’ policies would improve the lives of black people and other minority groups much more than those of Wall-Street-cozy Hillary Clinton. Sanders wants to give black, LGBTQ, and hispanic students free college educations and provide Medicare for All for those groups too, things Hillary fretted about by asking how we’re going to pay for it all. He’s for massive infrastructure spending which would produce plenty of jobs for minorities and improve the quality of drinking water in disadvantaged places like Flint, Michigan. Sanders’ policies would disproportionately benefit blacks over whites because he’s focused on the lower income-tax brackets they’re disproportionately represented in. But minorities “abhor” him? I smell a rat.

The GOP’s become more of a middle-class party while the Democrats are starting to look more like the country-club party the GOP once was. That’s why so many of them fear the radical Sanders, who they think might raise their taxes. They’d prefer to align themselves with a candidate who rails against racism but won’t have a hand in their pockets, so they talk about how Sanders is speaking in code to white people to suggest he’s a racist, which is nonsense. How many of them have been to a civil rights sit-in, or have been arrested at one?

People like Ken, who are living well, are out of touch with minorities, though they’re convinced they champion them and are morally superior to Sanders because of their staunch anti-racism. He told me that the number one job of a Democratic president should be to defend Americans from enemies, both foreign and domestic. Right, someone across town in Compton gets motivated to go the polls because they think the president will keep them safe—something we have a massive military infrastructure in place for—instead of reducing their grinding poverty. Because that Russian invasion that might happen.

Sanders probably will have to play the identity politics game to a certain extent if he wants a shot at the nomination, which doesn’t mean he can’t stick to his core policy platform. It would only require an adjustment in his rhetoric, which after all is all that identity politics really is. Many of his potential voters need to hear constantly that he’s fighting racism, even though he doesn’t have any control over it, so throw them a bone—that’s politics. This strategy would take much of ammunition away from his Democratic critics. Then, in the general election, he can tone this down and see how many disaffected former Trump voters he can pick up.