Looking back at Stewart’s 2004 Crossfire appearance. 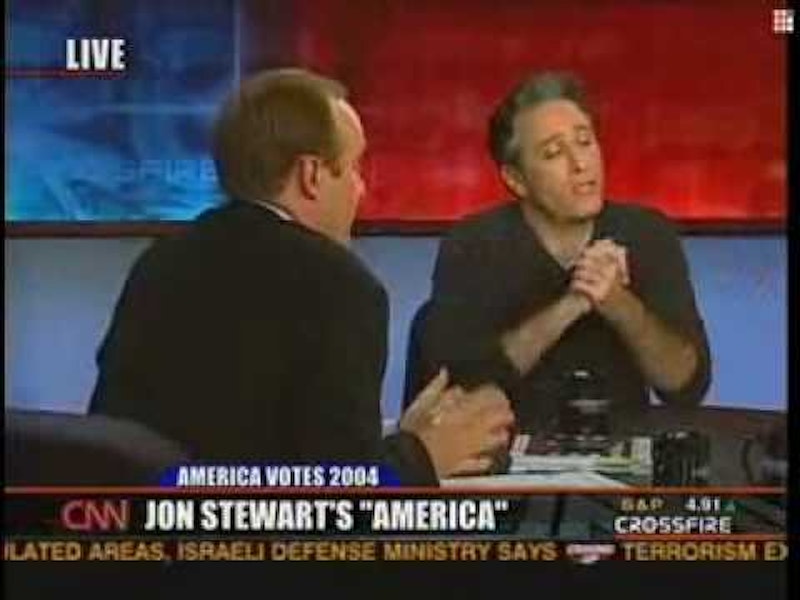 A little more than 12 years ago, right before the 2004 election, Jon Stewart went on CNN’s Crossfire and totally owned Tucker Carlson, so the story goes. Probably the defining moment of his tenure at The Daily Show: when he finally went on one of the shows he mocked and called a conservative bowtie prick a “dick” on live TV. Sick. Stewart’s delivery feels limp now, stupid. Condescending. Asked whom he found the “most impressive” Democratic candidate in the primaries that year: “Uhhhh, the most impressive?… I thought Al Sharpton was impressive.” He repeats questions, stalling for time to think of a pithy response that won’t get him or the network cut off. Stewart came on like an asshole and shamed a couple of partisan hacks, enemies of the day.

Carlson got in a dig at Stewart right as they were cutting to commercial—“I do think you’re more fun on your show, that’s just my opinion,” and Stewart, off-camera, shot back: “You know what’s interesting though? You’re as big a dick on your show as you are on any show.” Carlson laughed, all in good fun: even though his views remain odious and his pedantry obnoxious, Carlson actually has a sense of humor and some talent as a writer, unlike caveman colleagues like Sean Hannity and Bill O’Reilly. Even if he’s wrong and rude (as in the recent Teen Vogue interview, where Lauren Duca called him a partisan hack and Carlson looked like someone had shot his dog), Carlson is a harmless entertainer—a partisan who doesn’t look or sound reanimated from beyond.

Stewart wanted to have it both ways: fresh off the release of a best-selling coffee table book and riding high toward the peak of The Daily Show’s cultural relevance in the middle of the Bush 43 years, he thought he could have John Kerry on the show and lob softballs like “How are you holding up?”, while at the same time defending himself from Carlson’s hectoring by pointing out his company on Comedy Central: South Park and Crank Yankers. To his credit, Carlson kept needling Stewart and pointing out the hypocrisy in his argument. The Daily Show was more widely watched and discussed than Crossfire, yet Stewart thought he could waltz onto CNN’s set and fume and arch his eyebrows and smugly deflect questions about his own integrity and duty while making googly eyes at Mr. Bowtie.

Watching it now, Stewart’s behavior is embarrassing: condescending, devoid of substance, and totally hypocritical: The Daily Show was a real platform for many years, for a while the only news related TV that 18-24-year-olds watched regularly. Paul Begala recalled the interview a couple of years ago: ”I have not spoken to Jon Stewart since that day. I ran into him in a hotel lobby once, and he darted away like he'd seen a ghost. When I had a book I wanted to plug on his show, he wouldn't take my call.” This sort of empty smugness has been replaced by a delirious rage, an urgency that surprisingly didn’t exist when we were embroiled in two awful wars and only three years after 9/11. Who will the left rally around as a cultural mouthpiece?