Trump’s presidency is the greatest show on earth. 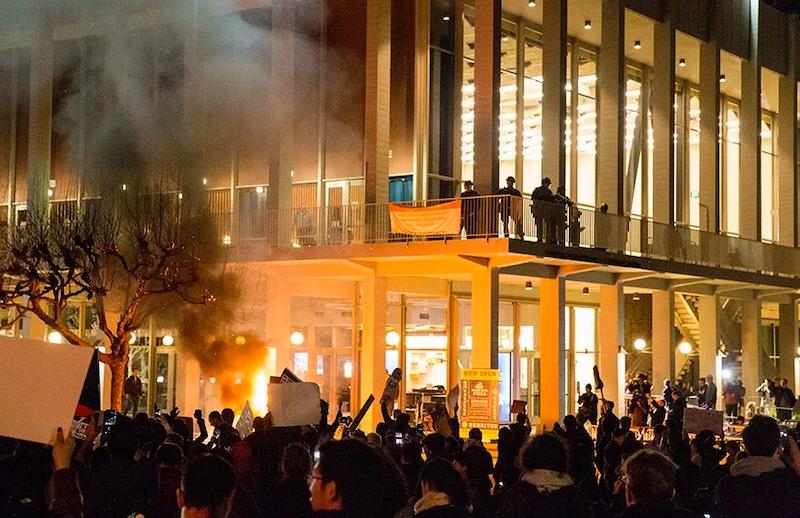 I’m beginning to really enjoy the 21st century. I’ve been so wrapped up in rage about the endless wars and grief over the death of the anti-war movement that I was starting to lose hope. Then came Trump. I’m sure he weighed the possibility of a third-party run against the predicted Jeb vs. Hillary snorefest that everybody expected. It would’ve failed, because ever since Ross Perot captured 19 percent of the vote with his amazing 1992 campaign, the game’s been seriously rigged against any threat to the established two-party Punch and Judy show. Had Ralph Nader been permitted to debate George W. Bush and Al Gore in 2000, he would’ve mopped the floor with them.

Instead, Trump hijacked the Republican Party, coming at it like a killer asteroid wiping out the dinosaurs. Hillary’s pathetic 20th-century campaign built on empty platitudes, the occasional lapse into Ebonics, and folksy anecdotes crafted by expensive market research focus groups to make her seem human proved ineffective against Trump’s 21st-century reality television tactics. She had the full backing of the entire establishment and spent over a billion dollars on her Norma Desmond act, only to be soundly defeated by Professor Harold Hill. It was, without a doubt, the most hilarious presidential campaign of my life. The American political process is all theater, and the 2016 election was The Greatest Show on Earth.

Just a few weeks into Trump’s presidency, it just keeps getting better. Nazi collaborator George Soros’ Rent-a-Mobs riot in the streets, driving Trump’s approval ratings up. Born in Budapest in 1930 as “Gyorgi Schwartz,” Soros came of age under the Nazi occupation of Hungary. His family survived by passing themselves off as Christians, and his first job was providing the Nazis with lists of Jews to deport. He told 60 Minutes that those years were some of the happiest times of his life. He made his fortune as a currency speculator, taking short positions against the currencies of countries that he worked to destabilize. He’s living proof that all stereotypes have a basis in truth.

His hired minions went berserk in Berkeley, California on Wednesday night, forcing the cancellation of a speech by Milo Yiannopoulis, a gay Jew who’s essentially a stand-up comic with an incendiary take on the censorious Balkanized fake Left. The Berkeley cops did nothing, no arrests were made, probably because the entire state of California outsourced their testicles to Nevada a long time ago. They’re talking about secession out there, and I hope that happens. It’ll save us a lot of money when the Big One finally hits.

This is great stuff. We’ve had a full year of the Hillary Cult labeling Trump and his supporters as violent racist sexist homophobic bigots, Nazis even, and in the wake of her miserable failure, what do they do? They mimic the Bolsheviks, alienating their potential supporters with divisive rhetoric and calls for violent resistance. The historical response to Bolshevism is Nazism. If they want Right Wing Death Squads, they’re on the right track. It’s inevitable that sooner or later a small detachment of rooftop snipers will pop a few rounds into one of these mobs and the ensuing stampede will ensure that no one ever attends another Soros-sponsored event.

I’m a pretty radical guy, and I’ve lived through some awful presidents, but calling for assassination and supporting the genocide of white people is way over the top. Personally, I think the calls for genocide fall under the rubric of free speech, and it’s always better to know who hates you than to have that hatred concealed beneath a thin veneer of civility. I got that from Malcolm X. The calls for assassination are something else altogether, and the Secret Service definitely has its hands full right now. It’ll be fun to see how the investigations pan out.

This is the most entertaining political spectacle I've ever witnessed, and it can only get better. Sooner or later, the alt-right will deploy its own brand of street justice against these mercenary thugs, and it’s going to be like the climax of a Sam Peckinpah movie. After Stanley Kubrick, Peckinpah is my favorite film director. It’s a shame he’s not around to see this. He’d love it. It reminds me of his astounding masterpiece, Straw Dogs. Now that’s entertainment.