The Muslim Ban With Joe and Mika 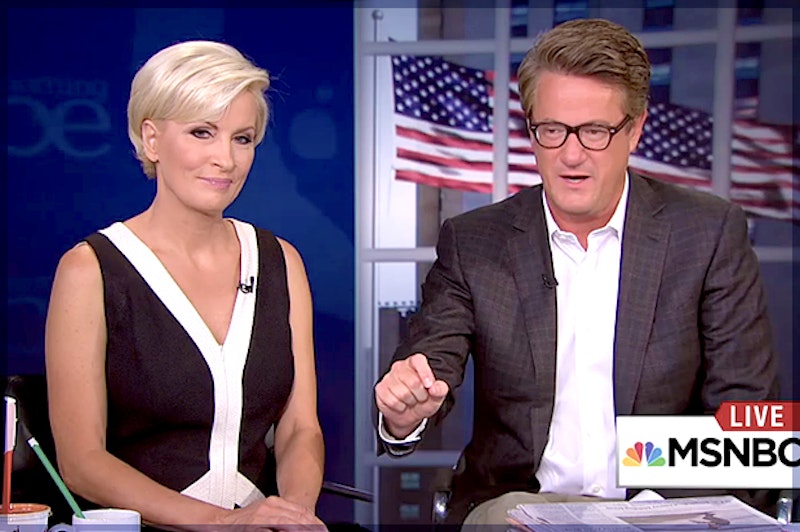 “I know this is an inside game,” says Morning Joe, launching into a topic, “but it’s important to explain to our viewers that one of the most important things a White House can do—” And he’s off. As the theme builds, Mika chimes in. “All right, the buck stops here,” she says, sounding the phrase as a sort of temple bell at the altar of firm executive government. She adds, “I mean, it’s apparent he thinks he runs the place.” She and Joe are fuming about Stephen Miller, who shat on the rug with the administration’s rule against letting in Muslims from certain Muslim countries. This kid, this White House flunky, blind-sided Washington and made a mess at airports.

Joe announces his rage. Arms folded, chin and glasses angled down and to the side, he seems to be unspooling lengths of industrial-strength ire from his stomach, letting the folds fill the studio so they can be admired. His finish: “… and making sure they didn’t implement this in some way they didn’t separate five-year-olds from their mother in the airport.” Otherwise he and the panelists focus on the harm done to personnel in Washington. “This guy did not trust General Mattis to give him the details of the operation,” Joe says. “Nor did he trust Homeland Security Secretary John Kelly to give him details of the operation. Nor did he trust the director of the CIA to give him—”

Ari Fleischer, a guest, intones a similar theme. “And you bring in the deputy secretaries, the secretaries, the lawyers,” he says. Fleischer, who used to be George W. Bush’s press secretary, is diplomatic about the new team and its debut. “I like the energy, I like the action,” he says. “In this case it went wrong.” He’s against turning away Muslims, though that fact gets mentioned only in passing. He focuses on how the policy could have been sold. “So there could be merit from their point of view—I don’t like it—but they didn’t explain it,” he says, running through possible arguments for the order. At another point, day-dreaming a scenario: “That should have been the announcement and the rollout. It could have been, but—”

Mika will have none of this. Her mind’s on how Washington was blind-sided. Like Joe, she pumps up dudgeon for display. When Joe performs, the camera centers him on screen; the panel drops its noise level. Mika faces more of a struggle, and she doesn’t have Joe’s giant-chested voice production. But she essays his style and she persists in it. “There was an expectation that this was conferred to with the top military leaders and the people who are in the cabinet that it actually has context on the international stage,” she says heavily. “And there is an expectation that this is done in the proper order of events that it’s effective.” She’s just saying the White House shouldn’t screw up.

Reince Priebus comes on the show to discuss the Holocaust. “Everyone’s heart here is impacted by the memory of that horrible time,” he says. “And for the record that’s the way we feel about it.” Why no Jews in the White House statement on the Holocaust? Hard to say, but he confirms the White House does oppose the Holocaust. At another point, with Priebus gone, Mika lets her mind dwell on him. “Reince knows exactly what he sees,” Mika says bleakly, “and it’s shadows.” She’s talking about White House intrigue, back-stabbing by colleagues. Nothing about the Holocaust, nothing about handcuffs and a little boy. Office politics, basically.