Impeachment of Trump Not Far-Fetched

The President better mind his manners with the GOP-controlled House. 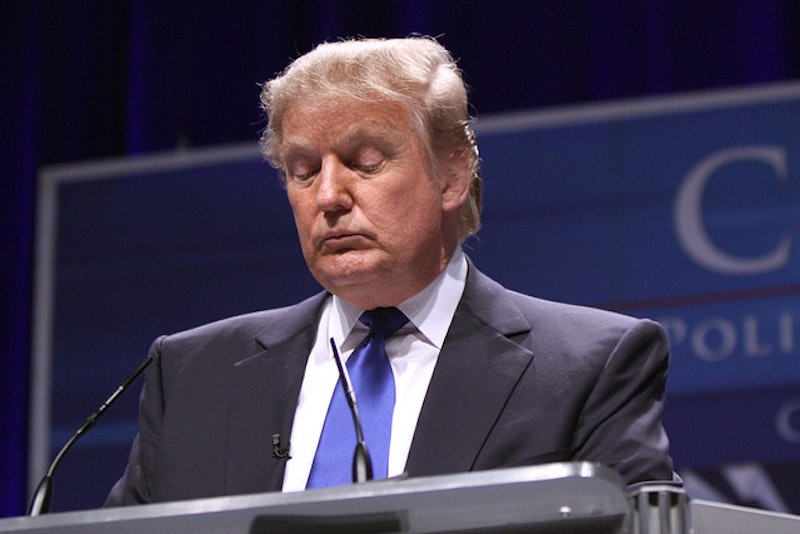 The year was 1968 and America took its cause to the streets. The nation was engaged in an insidious jungle war 5,000 miles from its shores which would eventually claim 50,000 of its young fighting men and damage uncountable thousands more. In the White House sat an imperious president who was escalating the conflict beyond reasonable means and cost to Americans who were taxed to fight the unpopular war against an enemy that defied clear definition. The adversary, an indistinguishable blur of North Vietnamese and Viet Cong, were characterized at the time as “little men in black pajamas.”

From the rock-throwing, angry anti-war demonstrations and tear gas clouds emerged an unlikely candidate for president, a cerebral loner and a part-time poet, Sen. Eugene McCarthy. What began as a lonely “kiddie crusade” evolved into a massive national movement of hard-headed kids and hard-hatted fathers, often converging at the doorstep to the White House in Washington, that eventually forced Lyndon Johnson to abandon the presidency rather than face an unforgiving electorate and a possible loss. (“Hey, hey, LBJ, how many kids have you killed today.”)

Great social change originates on the streets and not in the corridors of power. The power of the people to redress their government was very much in evidence a couple of weeks ago, not only here at home but in major cities around the world. America may become great again, but it’s getting a black eye in striving to do so in the first fumbling weeks of Donald Trump’s presidency. Trump, as with Johnson, has clearly overstepped the line, perhaps of legality, which remains to be tested, but surely of decency and humanity by slamming the door shut on immigrants, especially by religious definition.

The marchers, and there were millions of them, signify that while Trump may be the avenging archangel of Washington’s swamp to the good burghers in the nation’s Palookavilles, he’s clearly a black-hatted villain among the mainstream, especially women who mobilized for the march. For those who joined were concerned about more than immigration. Their sentiments and opposition to Trump cut across that single issue to include a broad swatch of concerns—abortion, the Supreme Court, education, equal pay, paid sick leave, LGBT rights, and other matters that make their hearts go pitter-patter. Even tech giants such as Apple, Amazon, and Uber are joining the growing parade of those who oppose Trump’s immigration ban. And a group called “Grab Your Wallet” has organized a boycott of stores that stock the Trump lines of merchandise, both Donald’s and Ivanka’s. Trump’s problem is that a lot of little constituencies add up to one big parliament of opposition.

As if to underline the point, a new Washington Post poll indicates that women intend to become more active in politics, motivated purely by Trump’s high-handed actions. And in a single weekend following Trump’s ban on immigrants, the ACLU rang up $24 million in contributions to fight the anti-immigration executive order. Since then, several judges have issued orders blocking Trump’s ban and the issue is headed for resolution and a test of presidential authority.

Consider Trump’s bully-boy actions since taking office mere days ago: He floated, then quickly walked back, the idea of a 20 percent tax on Mexican imports to pay for his cherished border wall. This, in effect, would be a tax on American consumers. In doing so, he provoked the president of Mexico, Enrique Pena Nieto, to cancel an official visit to Washington. He withdrew America from the Trans Pacific Partnership, which now gives China a leg up among Pacific Rim countries. Trump began to shred the Dodd-Frank consumer protections that reigned in the plunder by Wall Street. The Trump Administration exhibited its tough-guy “America First” foreign policy by placing “Iran on notice” after it test-fired an unarmed missile. Trump has pledged to repeal the so-called Johnson Amendment which prohibits certain tax exempt institutions, mainly churches, from engaging in partisan politics. Trump insulted and hung up on Australian Foreign Minister Malcolm Turnbull over a refugee agreement, saying, “This was the worst call by far”—a clear breach of decorum. He fired Acting Attorney General Sally Yates for defying his order banning immigrants from seven selected Muslim nations, which was to be expected. Yates questioned the legality of Trump’s order and said the Justice Department wouldn’t defend it. He’s refused to release his tax returns and has declined to disengage from his many business interests. And Trump even threatened to cut off federal funds to the University of California at Berkeley, that cauldron of student agitation, for protesting an appearance by the incendiary writer, Milo Yiannopoulos, a protégé of Trump’s gray eminence, former Breitbart CEO Stephen Bannon. And that’s only a sampler.

So, despite the boorish behavior and questionable authenticity of many of his executive orders, it’s not as if Trump is about to be dumped or driven from office because of a few million demonstrators. He’s too vain and smug for that. If Louis the Sun King were alive today he’d be Donald Trump. What the assembled crowds do signal, though, is that a consensus is building against Trump and his agenda and that the likelihood of impeachment is not far-fetched. We are witnessing the revival of civic anger on a scale not seen since the 1960s. Now, before anyone’s knickers get knotted, impeachment, as is widely thought, does not mean removal from office. It means “to accuse,” and is simply the first step in a long and tortuous process. In a recent survey, only 48 percent say they’d be opposed to impeaching Trump. Put another way, a majority favor it.

It’s remarkable to note, however, that of the nation’s 45 presidents only two have been impeached—Andrew Johnson and Bill Clinton—and both were acquitted. Richard Nixon resigned before he could be impeached. And believe it or not, impeachment proceedings were actually prepared against President Barack Obama, mainly over his birthplace, but failed to ignite.

But Trump’s a different case. He’s loose and careless with facts and appears to be under the ideological spell of a handful of whisperers, significantly, Bannon, whose xenophobic worldview shaped many of the campaign promises Trump is acting out as president. In doing so, Trump has offended many Congressional Republicans by leaving them uninformed and hapless to defend. Many of Trump’s proposals will eventually require Congressional action. And it’s the House of Representatives that initiates impeachment proceedings. (“The President, Vice President, and all Civil Officers of the United States, shall be removed from office on impeachment for, and conviction of, treason, bribery, or other High Crimes and Misdemeanors.” U.S. Constitution, Article II, Section 4.) It’s those conflicts of interest with his businesses that are bothersome to many and likely will cause Trump grief before too long. But, as Trump has often said, as president he can do pretty much what he wants where his private enterprises are involved.

Even worse, many in the flurry of Trump’s initial executive orders were flawed in their language and execution, and their draftsmanship bore the laxity of amateurs with little or no government experience (Bannon) let alone diplomatic niceties. Many of the manifestoes are meant to be instant gratification, both to Trump and to his supporters. They’re erratic, episodic, and disjointed, issued more out of spite than thought. That’s why they’re dangerous. And maybe that’s why Trump has the highest disapproval ratings of any newly elected president.