The Democrats’ Risky Race to the Left 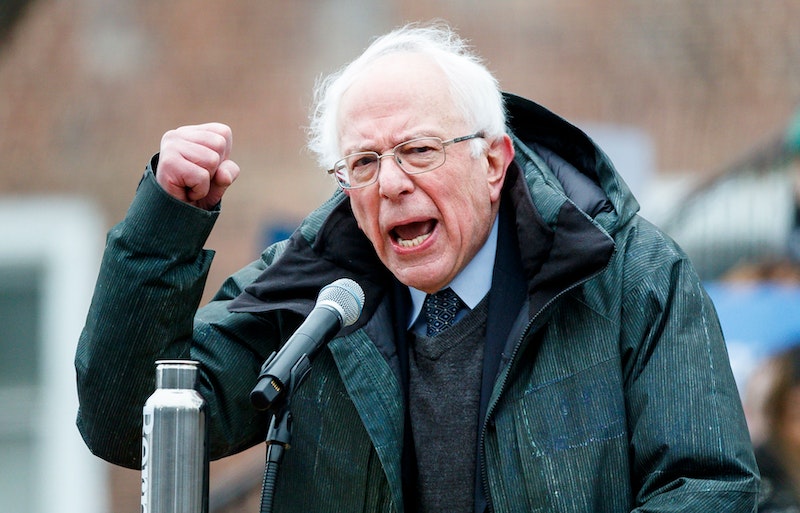 A 41-year-old plumber named Binh Luc who beat five people to death with a hammer in 2012 in San Francisco received five consecutive life sentences. The convict doesn't get much good news these days, but Bernie Sanders has some. The socialist presidential hopeful is now calling for giving all felons in prison the right to vote.

How far to the left can you go in the Democratic Party? Alexandria Ocasio-Cortez notwithstanding, left-leaning candidates didn't do well in the 2018 elections, which raises questions. Democrats oppose the unfair disenfranchisement of felons after they've done their time, but Sanders is pressing them to go further. When this point came up during a recent forum in Iowa, his competitor, Elizabeth Warren, said she doesn't yet have a position. While her remarks indicated she's dubious, she'll tread lightly on this one.

“You’re still living in American society and you have a right to vote," said Sanders, even though violent offenders have been removed from society because they're a danger to it. How does it serve the nation, or help your campaign, to call for criminally violent citizens to participate in the democracy?

Plenty of Americans would like more prison reform, including the release of many of those imprisoned on drug charges, but you have to wonder how much they care about enfranchising murderers and rapists while they're still doing their time, especially in the key states of Wisconsin, Michigan, and Pennsylvania. Sanders is giving red meat to Trump that he can use during his rallies while talking about how the Democrats are soft on crime.

On Sunday, Sanders misfired again when asked a question about open borders at an Iowa Town Hall. He warned about all the poverty in the world and how the impoverished would be flocking to the US under such conditions, putting him in Trump territory. This kind of language reinforces the knock on Sanders that he’s mostly concerned with white, blue-collar workers in the midwest.

Ocasio-Cortez has quickly become the tone-setter for the Democrats. When she released her Green New Deal, a sweeping, socialist manifesto extending well beyond the issue of climate change, the top 11 Democratic 2020 candidates, feeling the pull to the left, quickly endorsed the plan, with five of them co-sponsoring the measure in the Senate.

The plan, which Bloomberg estimates would cause $6.6 trillion annually, is problematic because the US accounts for only 15 percent of the world's carbon emissions, so the global impact would be negligible. Mitch McConnell took advantage of the Dems’ herd-like behavior by putting it to a vote, and all the embarrassed, outfoxed Democrats could do was whine.

At his recent National Action Network convention in New York City, sketchy Baptist minister Al Sharpton got almost all of the 2020 Democratic contenders to vow they'd support a Congressional bill to study the viability of slavery reparations, an issue that's never gone anywhere in the Party until the recent leftwards lurch. Sanders, afraid that his past opposition to reparations was making him look like a centrist, assured Sharpton that he'd vote for the bill. None of the candidates have talked about how much reparations might cost, or how the money will be raised, but Republicans are sure to warn Americans that the Democrats are going to raise their taxes.

The Left has rarely been so powerful in the Democratic Party, but it's in danger of squandering its advantage. That's why Barack Obama—who left-wing Democrats increasingly see as an obstacle—recently warned about the possibility of rigid ideology leading to what he called a “circular firing squad” that would wound all of the candidates before Trump can come up with derogatory nicknames for them.

Trump's approval rating of around 41 percent barely budges, so the Democrats have a path to the White House. They've told Americans that we're in a state of emergency, so wouldn't a low-risk strategy be the best bet if Trump really is the monster they claim? Instead, they're tacking hard to the left in pursuit of their increasingly left-leaning base.

Elizabeth Warren, when asked about felons voting, could’ve said she opposed it, which would’ve helped restore sanity to the early campaigning and made her sound reasonable. How much courage would that have taken, given that it's a non-issue? Other Democratic candidates could’ve attended AIPAC and spoken their minds, which is allowed, instead of boycotting the convention and then going on to genuflect in front of the nation's number one race baiter in New York City. All of them could’ve taken their time in reacting to the Green New Deal, thus avoiding looking foolish by voting “present” when McConnell called their bluff. They have to figure out if their top priority is pleasing AOC or winning in 2020.