The Script Is in Place

Repeating the cycle for another mass shooting. 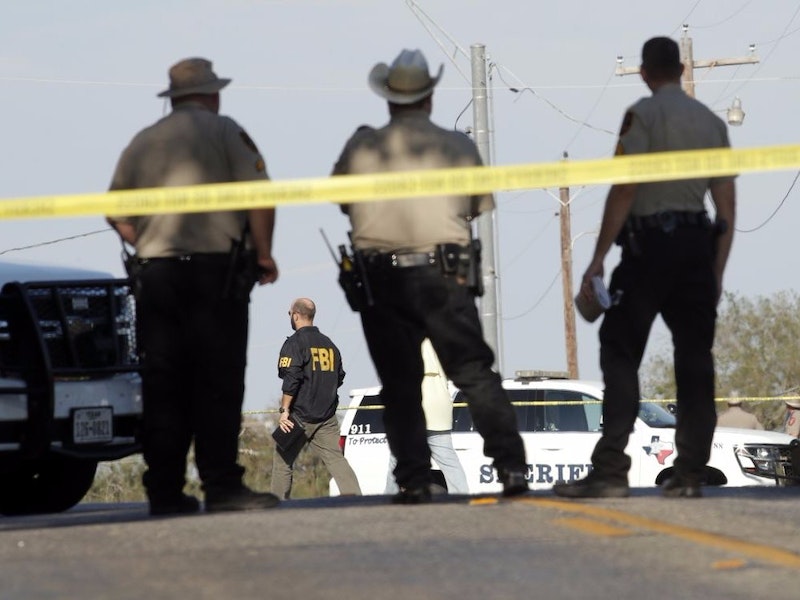 There's a slightly different version of the same depressing movie playing over and over now. The plot starts with a man killing a bunch of people, for reasons that aren't immediately discernible. Then the rush is on to weigh in on the issue, before key facts are available, with the respondents falling into a handful of categories. There’s the “thoughts and prayers crowd,” whose message looks something like this tweet from Speaker of the House Paul Ryan that he posted after just the latest massacre that left 26 dead and 10 gravely wounded: “Reports out of Texas are devastating. The people of Sutherland Springs need our prayers right now.”

This is the standard, post-massacre response from a GOP politician. Most of their constituents are religious, and they want God to be invoked at a time of tragedy. The same God who allowed innocent, God-fearing people who were in a church to worship him/her/it to be murdered, for whatever reason, must now be prayed to in order to complete the cycle.

Then the script requires that liberal, pro-gun control people react to the calls for prayer exactly like Actor Wil Wheaton did with this tweet: “Paul Ryan is the Speaker of the House. He can offer laws and regulations to end this, but he offers thoughts and prayers instead.” That's his white-bread, scripted reply. He also offered this red-meat, unscripted one, also addressed to Ryan: “The murdered victims were in church. If prayers did anything, you worthless sack of shit, they'd still be alive.” That one didn't go over so well among people of the Christian faith, and the actor was forced to apologize.

The above group overlaps with another left-leaning faction that says what just happened was an act of terrorism, regardless of the fact that the gunsmoke has barely cleared and there's no evidence to evaluate it yet. Their message looks something like this one from New York Times contributor Wajahat Ali, “No one yelled ‘Allahu Akbar’ and the suspect wasn't ‘Middle Eastern’ so it's definitely not terrorism.” These people are convinced that white men are allowed to get away with terrorism without being called terrorists, and want all mass murders by white men to be classified as what they call “domestic terrorism,” even if the crimes don't fit with the standard definition of terrorism. The resulting stats would indicate that Muslims commit a substantially lower percentage of terrorist acts than they currently do, which is the goal.

Some of the people who choose to comment on social media don't grind their axes while the bodies are still warm but, for the most part, focus on the individual victims gets lost in the scramble to score political points or signal virtue. What’s needed instead is coherent analysis that could be helpful in understanding what happened and how it might’ve been prevented.

The thoughts-and-prayers politicians offer condolences and then let things cool off. There’s little choice for them, as they long ago accepted that mass shootings are the price a society must pay if guns are to be generally available to citizens, even if they can't say this out loud. What they can say, in this particular case anyway, is that an armed neighbor of the church put an end to the killing spree by shooting the killer, which advances their “good guy with a gun” narrative that they use to promote their ideal society in which everyone owns a firearm.

The anti-thoughts and prayers contingent calls for “common sense” gun legislation or stricter gun regulation after every mass shooting, without offering specifics on what sort of action the latest incident indicates to be advisable. This is vague and useless, but offering useful ideas requires actual work.

Federal law prohibits the sale of firearms to spousal abusers, and all licensed gun dealers in the U.S. are required to screen potential buyers through the National Instant Criminal Background Check System. CNN reported that the murderer, Devin Kelley, purchased the Ruger AR-556 rifle used in the shooting in April 2016 from an Academy Sports & Outdoors store in San Antonio. Kelley was court-martialed from the U.S. Air Force in 2012 for assault on his spouse and their child. The above facts, which were all available to the public shortly after news of the crime went public, indicate that tighter restrictions on gun ownership would not have prevented this crime, even though that was the post-crime consensus on the Left. They suggest, instead, that there was a glitch in the system. Sure enough, CNN reported on Tuesday that the Air Force neglected to enter Kelley's conviction for domestic violence into the federal system, which allowed him to purchase several guns from licensed dealers. The lesson here is that the system already in place must be tightened up.

Those complaining about politicians offering their thoughts and prayers should realize that they're just repeating tired clichés, and they're being disrespectful to the families of the victims. It's more productive to put in some effort and identify a solution. Those who want the Sutherland Springs murders to be considered domestic terrorism should realize that Kelley's motivation was to hurt his mother-in-law, who attended the church he shot up, meaning it was not an act of terrorism. The Republicans offering prayers ought to give some thought to the fact that federal laws fail to require domestic abusers to surrender their firearms once they are convicted of a crime and that the private sale loophole in the federal gun law allows domestic abusers to legally purchase guns. None of this will happen however, because the script is in place and ready to be played out once again as soon as the next mass shooting takes place.