The Hip Tradition of Forbidden Revels

Cabaret law repeal to spark dancing from Bronx to Williamsburg. 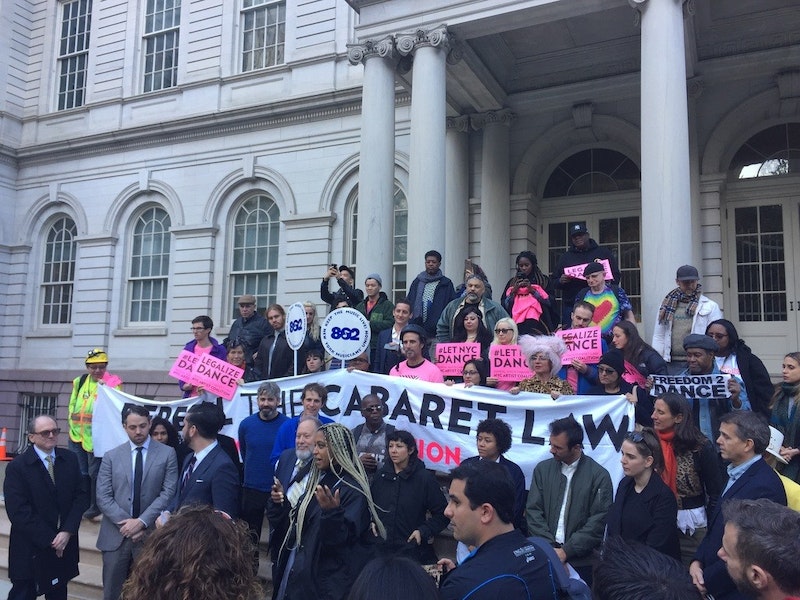 On Halloween, the New York City Council voted to allow dancing in New York City bars and music venues: 41 votes in favor of repealing the old cabaret law forbidding such revels, with one Footloose-villain-like vote in opposition.

Even in this modern metropolis, we haven’t come that far from the days of religious prohibitions on dancing—or chasing offensive mimes into the woods of medieval Europe. In the case of New York’s restrictive cabaret law, though, it was Prohibition of alcohol a century ago that did in dancing as a side effect, giving the City government an additional legal weapon to crack down on speakeasies and prostitutes.

Everything with government is two steps forward, one step back, so even when dancing was permitted in the City, a system was put in place of permission cards allowing only approved performers to operate, with performers who had prior drug offenses, for example, legally forbidden to take the stage.

This time around, there’s a modern catch in the repeal bill: Venues that introduce dancing will have to agree to add surveillance cameras. This is being reported as if it’s a perfectly logical tradeoff—like, you dance more, we’d better watch you more—y’know, for safety. You can dance if you want to, but der Kommissar is always watching you, to mix metaphors from the New Wave decade.

Of course, any excuse for heightened surveillance is treated as logical these days. That 2006 movie lamenting life under the East German surveillance state, The Lives of Others, seems a century ago and a culture away now, as I’ve noted before, not because East Germany ceased to exist three decades ago but because the movie itself came out one decade ago, just before we found out we’re under constant surveillance in the U.S. as well. There’s no longer as much contrast between East Germany and us. Did anyone notice or care when then-Mayor Bloomberg openly bragged a few years after the film’s release about City buses here adding audio-surveillance systems, or when he enthused about drones? Not really.

One of the clearest signs you’re dealing with an authoritarian—whether right-wing or left-wing—is whether the person likes, maybe even relishes, the idea of government having a lot of leeway. The last thing I want is a government with leeway and whims, such as the power to decide how much dancing is too much.

It should make us nervous in the same way a law now in the news in Oregon that forbids all sex between people under age 18 should. It forbids not just sex between adults and minors, mind you, but all sex between minors. What’s scary is not so much that the law is puritanical but that few people in the entire state seem worried that it’s unclear how literal or frequent the enforcement of that law will be. Laws shouldn’t be enforced on the basis of the vague hope cops and prosecutors “won’t get too carried away.”

Similarly, when Williamsburg bar owner Andrew Muchmore, whose establishment was home to several of the live debates I sometimes host here in NYC, was charged with a violation of the cabaret law in 2013, Muchmore’s Bar beat the rap, but the poor man was rendered a bit paranoid about every act of spontaneous toe-tapping that occurred in the crowds of hip indie-music-appreciators that make up his typical patrons.

Luckily, he’s a libertarian-leaning lawyer in addition to being a bar owner, so he didn’t just take the charge lying down. We should all be grateful, but we should also remember not every business owner harried by government is a lawyer or a fighter. (I’ll say more about libertarians and other political factions in next week’s column, by the way, and my apologies for delaying that piece. If you’re reading today’s because I promised I’d be discussing the Reason magazine crowd, be consoled by the thought that this news about cabaret laws is stuff after Reason’s own hearts.)

The motivations behind a law should be almost irrelevant once we can observe its effects, but people love to suss out motives (because psychology, perhaps wrongly, seems easier to understand intuitively than law). So I’ve heard an Oklahoma-raised conservative acquaintance of mine defend the cabaret law so long as it seemed meant as an anti-vice tool, though I suspect she’d like the law less if she knew some of the businesspeople dealt an economic blow by it. And I’ve heard performance artists denounce the law as a killjoy measure, despite them likely supporting nearly every other regulation and license this city imposes.

Similarly, when I was in college, some students supported a law capping the number of people who could live in one apartment when they thought it was a blow against greedy landlords—but the students rejected the law when they thought it was aimed at keeping out big immigrant families. It’s the same stupid law with the same awful effects regardless, people. Get rid of it.

People are drawn to culture wars, perhaps more and more easily as material satisfaction is more readily taken for granted (relative to past centuries). Culture wars are sort of a fun hobby for angry people with time on their hands. But a law imposes the same restraints on people’s ability to use their bodies and property as they choose regardless of that law’s convoluted cultural or philosophical rationale. Prostitutes still get sent to jail whether the arguments initially putting them there were Bible-thumping and sin-punishing or Progressive and female-hygiene-protecting (which is how they sell some anti-prostitution efforts at the UN these days).

I say, harder and harder though it’s getting to push this message these days, ditch all the culture wars and just plain deregulate regardless of where the cultural chips fall. Venues and their patrons, like subcultures and their participants, can decide for themselves what to do next (so long as they aren’t doing it with others’ bodies or property without permission, such as by vibrating the neighbor’s wall with a thudding bass in defiance of prior promises, etc.). The next move for many New Yorkers, in any case, will be a dance move.

—Todd Seavey is the author of Libertarianism for Beginners and is on Twitter: @ToddSeavey