In Maryland, Unlike Virginia, Trump’s Not Even a Hiccup 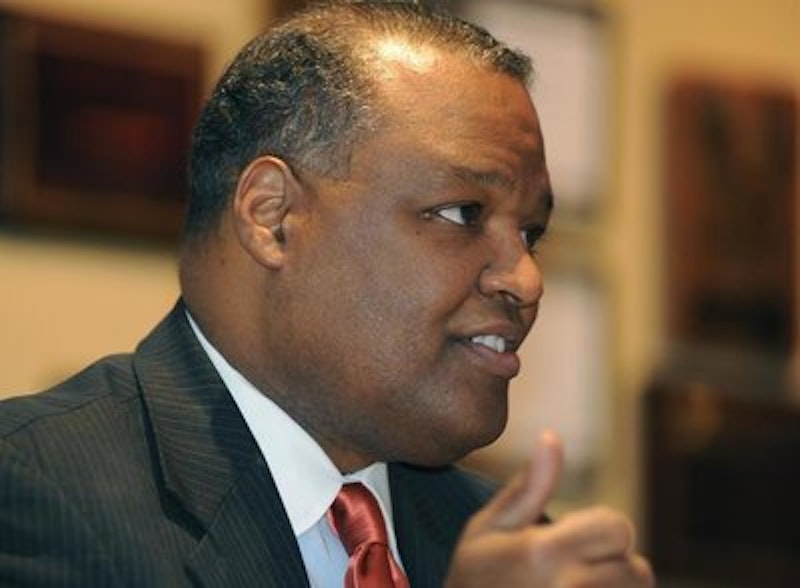 Two black candidates for governor of Maryland are in a lively match to leapfrog to the top of the heap of Democrats. In the pep rally before the June primary for governor, Ben Jealous is piling up endorsements, but Rushern Baker is chugging ahead in local polls. At this stage, though, endorsements and polls offer little but cold comfort and recognition. But they’re better to have than not. The value of endorsements, if any, is not so much to persuade voters but to humble the opposition and, at best, to force retreat and withdrawal.

As much as tracking Maryland’s scorecard contest among eight Democrats, all eyes will have a southerly focus this week for hints of any Trump effect in Virginia’s early-bird election for governor. So far, Trump, like the Princess and the Pea, has been heard but barely felt in Maryland politics. Nonetheless, Democrats have yet to figure how to get a handle on the method and message for dealing with the Twitter-y president and his influence on like-minded blocs of voters.

The arc of a campaign is long, costly and uncertain. Often it begins with a single car, maybe a driver, an aide or relative, some seed money on loan from a kid’s college savings account, to be repaid from the victory fund at the end, when the roar of the crowd launches a career that began, perhaps, as a volunteer in the precincts of some Palookaville. Or not. That’s the old storybook, Jimmy Stewart, Mr. Smith Goes to Washington, way.

Recent campaigns in Maryland, though, have reached a high-dollar mark of $20 million, a stratospheric amount achieved in the early-2000s by former Gov. Robert L. Ehrlich Jr. and stuck near there to the present day. Republican Gov. Larry Hogan already has $5 million salted away through what appears to be an uncontested primary season and as an early cushion against which ever Democrat survives as his opponent.

Baker has a local network of connections from his years of service in the General Assembly and Prince George’s County, and Jealous maintains a Rolodex of national names from his term as head of the nation’s premier civil rights organization.

The high cost of campaigning in Maryland is, in part, because the state straddles two media markets—the Baltimore market which is the nation’s 26th largest, and the Washington market, the ninth largest and much more expensive but largely wasted because campaign commercials lap over into adjacent states. Big bucks also go to media and campaign consultants, the expensive out-of-town hit-men who arrive to knee-cap the opposition.

Jealous, former head of the NAACP, has picked up endorsements from Sens. Bernie Sanders (D-VT) and Cory Booker (D-NJ) as well as the Service Employees International Union, among others. The Sanders and Booker endorsements matter little in Maryland: They’re nice to have but they’re not on the ballot to provide drag. Jealous was a surrogate for Sanders in last year’s presidential election and is running on Sanders’ leftover issues of a $15 minimum wage and free college tuition, which may lack resonance in 2018.

But the SEIU endorsement carries some cachet as well as people-power. The SEIU is the fastest (if the only) growing union in the country which is heavily represented by government workers in the populous Maryland suburbs around Washington. The SEIU specializes in boots-on-the-ground politics. They are just three of Jealous’ dozen or more endorsements, one way of demonstrating support and muscle early in a campaign.

But there’s another way as well. There are published accounts of polls showing Baker, the term-limited Prince George’s County executive, leading the pack in the Washington suburbs where he’s widely known and recognized. Baker also got a lift from a recent Mason-Dixon poll which showed him as the strongest Democrat in head-to-head matchups with Hogan. But tit-for-tat, Baker also picked up the neon-name endorsement of Maryland Sen. Chris Van Hollen (D), who’s returning the favor for Baker’s endorsement in last year’s U.S. Senate race against Former Rep. Donna Edwards (D), of Prince George’s County.

In the end, Jealous and Baker are competing for the black vote in a state with a 33 percent black population where blacks contribute about a third of the Democratic vote on Election Day, more or less, depending on turnout, which can be uncertain.

Madaleno may be the sleeper in the crowd. As a long-time legislator and before that a state budget analyst, Madaleno is thoroughly immersed in the issues that animate the State House and has a solid record on forward-thinking as well as fiscal matters. He’s vice chair of the Budget and Taxation Committee and a knowledgeable critic of Hogan’s fiscal policies.

Madaleno is openly gay, which gives him an established base on which to build a credible campaign. The gay community is expansive and active in Maryland politics. He also has widespread support among members of the General Assembly, who make up the core of the Democratic party’s statewide ground game on primary election day. No question, though, that Van Hollen’s endorsement of Baker was a setback for Madaleno, especially in their home county of vote-rich Montgomery.

It there’s a looking-glass message for Maryland Democrats in the Virginia race, it’s this: Study the tone and the tactic of the contest to figure a strategy that works for the party and not a one-note approach about President Trump. In Maryland, unlike Virginia, Trump’s not even a hiccup, especially since he’s been trashed and disavowed by Hogan, his popularity is sagging and the Russia noose is tightening around his neck. As a candidate, the popular Hogan is armored in Teflon.

What’s more, the Trump hard-liner candidate was defeated in the Virginia Republican primary in favor of the establishment GOP nominee, Ed Gillespie, who’s up against Democrat Ralph Northam, the state’s lieutenant governor, favored in most polls. Gillespie squeaked by a Tea Party activist and bombastic Trump supporter, Corey Stewart, by a dime-thin 1.24 percent of the vote. Only lately—and perhaps too late—and trailing in the race, Gillespie has attempted to replicate Stewart’s campaign by enlisting Trump campaign workers to his cause, though this has provoked dissension with more traditional Republicans who have supplied much of the money and the impetus for Gillespie’s campaign.

Maryland, like Virginia, is split between rural Republican areas and metro-zoned Democrats who are clustered in the counties, such as Fairfax, around Washington. Blacks make up about 20 percent of Virginia’s electorate. Hillary Clinton carried Virginia, narrowly, as she did Maryland (by 26 points), in 2016, and Virginia has consistently elected Democratic governors since the 1990s although the state’s legislature is in Republican control by a slight majority—the reverse of Maryland.

No two states are alike just as no two elections are the same. One of the lessons they all share, though, is the winnowing of the field. When next June’s primary arrives, there won’t be eight Democrats clawing each other, but perhaps only two or three. That’s what lead-ups to primary elections are all about.