The Donkey in the Room

Why won't Hillary go away? 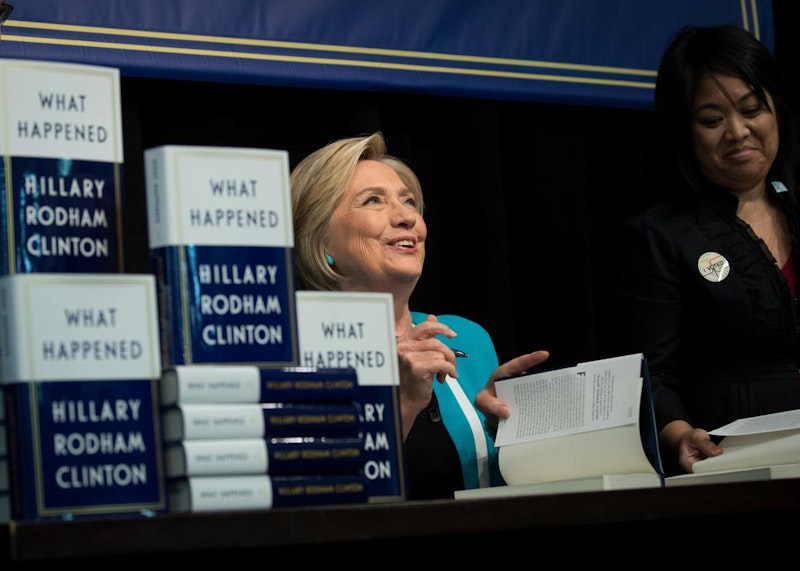 The Democrats are in imminent danger of going under, and if that happens they'll stay under for a very long time. Donna Brazile has jumped ship, Elizabeth Warren shakes her head (how could we not know?), The Podestas and Huma are in somebody's crosshairs, and then there's this donkey in the room.

The donkey cannot admit her own flaws, the emails, the closed-door tirades, the very public flashes of something sinister: "We Came, we saw, he died." and "We landed under sniper fire." One is tempted to afford her some measure of sympathy—after all, Hannibal Lecter had a horrid childhood… but he had the good grace to disappear.

She will not. She stands there center stage and refuses to budge, braying about Bernie, Trump, Assange, the Russians, gender bias, pointing everywhere except at herself. It's all very bad theater, incurably sociopathetic.

And how fitting it is that the likely next Democratic front-runner comes to us from the same glittery town that brought us the Harvey Weinstein scandal: Hollywood. I'm betting on George Clooney, who's as handsome as a Republican, filthy rich, and has the charm to captivate voters, the twinkling eyes to make women swoon. He made the appropriate tsk tsk noises regarding Weinstein, and recently remarked that Hillary ran an unenergetic campaign—which is a polite way of asking, “Mind if I move to the head of the line?” Yes, indeed, she minds! Oblivious to all the murmurs, she tells us What Happened again and again; was seen recently touting her book in the toilet paper aisle of a market, her blowsy pantsuit dusting the Charmin with yellowcake.