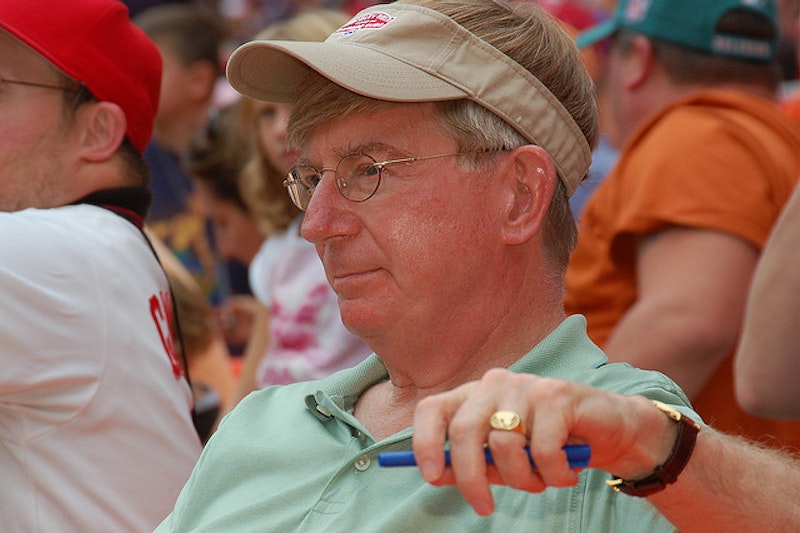 Sometimes an illustrious talking head is able to break through the noise with either a Big Idea or a Big Takedown or a Big Something or Other to distinguish him- or herself from all the rest. Sometimes it’s because what you wrote riled the other side; sometimes it riles your own side; and sometimes it’s just catastrophically stupid any way you look at it.

The last time Washington Post columnist George Will found himself in such a position was early last year, when he deliberately misinterpreted climate change data from a prominent institution to prop up his bombastic anti-climate change arguments. The column in question was a failure of journalism, intellectual honesty and scientific inquiry.

Recently some interesting poll data surfaced, showing that only six percent of scientists identify as Republican. This is, in no small part, due to the unfortunately pervasive and nefarious tendency from the Right to demonize science, higher education—education in general—and anything that smack of irreligion. Anytime a Congressional Republican wants to show the world just how terrible pork barrel projects are, he or she uses small research grants—fruit flies, agricultural research, wood studies, you name it—as a crutch with which to beat Democrats over the head.

Thousands upon thousands of scientists and researchers from across dozens of institutions and countries have concluded that humankind has indeed affected the health and continuity of the planet—a conclusion that, like all else in the vast arc of scientific progress, is supposed to be challenged, tweaked, fine-tuned, etc. But when those conclusions are lumped into vast conspiracy theories from both nutjobs and elected politicians on the Right, it’s not that difficult to imagine a world where few, if any, scientists identify as Republican.

But the conservative critique of reason isn’t simply contained in Sarah Palin’s diatribes against “elites”  (i.e. anyone with a second degree). Conservatives have a stranglehold on the K-12 textbook industry, wherein Thomas Jefferson is boxed out of the founding of the Unites States; the Civil War was about “states rights,” not the preservation and expansion of white supremacy; and everything after Ronald Reagan is liberal-Marxist-socialist overreach. Even if you think raising taxes to Clinton-era levels amounts to a war on the rich, it’s easy to see why so many intelligent, discerning people who might identify as Republican won’t even bring the word up in private conversation. Willful ignorance is pretty unattractive to even the most fiscally conservative of intellectuals. You’ll find no traction with them, or the university system as a whole, if you continue to demonize any- and everything that it produces.

Which brings us to our “say what?”  moment of the week. In Will’s most recent column, he writes (put down your beverage, now, unless you desire a new keyboard):

With populism rampant, this is not a propitious moment to defend elites, even scientific ones. Nevertheless, the nation depends on nourishing them and the institutions that sustain them.

Republicans are rightly determined to be economizers. They must, however, make distinctions. Congressional conservatives can demonstrate that skill by defending research spending that sustains collaboration among complex institutions - corporations' research entities and research universities. Research, including in the biological sciences, that yields epoch-making advances requires time horizons that often are impossible for businesses, with their inescapable attention to quarterly results.

Which is more ludicrous: the assertion, “Republicans are rightly determined to be economizers”; or, “Congressional conservatives can demonstrate that skill by defending research spending that sustains collaboration among complex institutions”? The former is veritable sham, evidenced by explosions of the deficit under both Bush and Obama. Russ Smith wrote that it’s time to do away with the Red State/Blue State binary, and you can’t find a better argument for doing away with the liberal/conservative binary than with taxes and the deficit.

The last Congress's misbegotten stimulus legislation—an indulgent and incoherent jumble of pent-up political appetites—may have done large and lasting damage by provoking a comparably indiscriminate reaction against federal spending. This will be doubly dangerous if a curdled populism, eager to humble elites, targets a sphere of American supremacy and a basis of its revival—its premier research universities.

Is Will saying the most recent stimulus legislation should have contained more scientific funding? Was he saying this before the deal was passed? Is he saying the tax cuts for the rich—an unfortunate bone for the grievance-riddled Republicans to gnaw on—were a bad thing? He warns of a “curdled populism” that “targets a sphere of American supremacy.” Where the hell has Will been hiding the past—oh—10 years? The conservative movement’s rejection of science, research and technology (except for the military, obviously) is as much a cornerstone of the movement’s politics as is disenfranchising homosexuals.