It's Time to Retire the Red State/Blue State Shorthand

Dividing the country into neat descriptions is convenient for the media, but it misrepresents the political views of Americans. 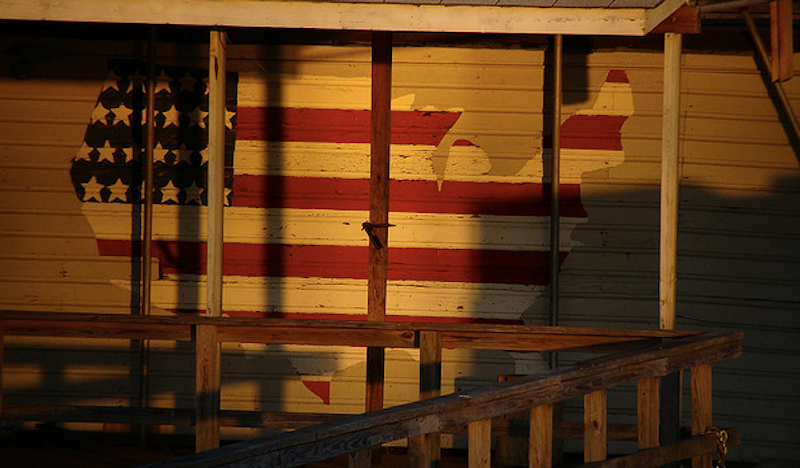 One day last week, mid-morning, I was planted on a Greenmount Ave. curb in Baltimore City, attempting to hail a taxi. It doesn’t usually take too long for a cabbie to pull over, but it’s a barren stretch of road and the distractions are few, so sometimes I talk to myself or even sing a song—say “Hats Off to Larry” or “The Letter”—that was a Top 10 hit on New York’s WMCA when I was a kid. On this occasion, however, there was a sight as rare as the spotting of a fox preening in our front yard. A garishly decorated SUV was momentarily stalled in traffic behind an MTA bus, and aside from the dozen or so decals and bumper stickers on the vehicle, there were also two flags blowing in the breeze: one for the Baltimore Ravens, the other representing the Confederate States of America. The driver was a young man, maybe about 30, clean-shaven, and he was bobbing his head to some unidentifiable music. The truck had a Maryland license plate.

My immediate reaction was one of bemused confusion: Maryland is, after all, a blue state, and despite its murky “border” status during the Civil War, it’s not often that you see a Confederate flag displayed so openly. I wondered if the driver was simply a happy-go-lucky moron who didn’t realize that he was courting danger by letting this hated symbol fly—particularly in a city that’s nearly 70 percent black—or if he was a idealistic zealot who was a member of some organization that I was happily unfamiliar with. A cabbie arrived and I got into the car, taking the front section of The New York Times out of my briefcase for the 15-minute ride, but couldn’t concentrate, still thinking about Johnny Rebel. Then, in a sudden flash, I slapped my forehead, feeling rather like a silly goose for falling into the media trap of labeling an entire state either liberal blue or conservative red.

It’s said, ad nauseam, that today’s political culture is defined by polarization and intractable partisanship, the likes of which the United States hasn’t witnessed in generations. I believe that the ghosts of LBJ, Bobby Kennedy and Richard Nixon may beg to differ—despite today’s still-crippling recession and hate-mongering personalities on both sides of the political divide, the late 1960s was nothing if not tumultuous—but let’s roll with the current orthodoxy. I don’t think it’s much of a stretch to at least partially blame the red state/blue state terminology for fanning the flames of friendship-destroying debate. Hard to believe now, but this catch-all generalization is quite recent: it wasn’t until the 2000 presidential election that television stations, on their electronic maps, labeled states won by George W. Bush as red, and Al Gore’s as blue. Prior to that, the colors switched on and off (Ronald Reagan’s landslide victory over Jimmy Carter in 1980 was highlighted by a predominantly blue map of the country) and ABC even used yellow in 1976.

It was the protracted 2000 election that sealed the blue/red lexicon: since the winner wasn’t decided until more than a month after Election Day, Americans were glued to the tube and “red” and “blue” became politically derogatory terms. Michael Moore infamously posted on his website after 9/11 that the terrorists had screwed up by attacking the allegedly more tolerant “blue” people of New York and Washington, D.C., rather than the less cosmopolitan (to be polite) “red” backwaters of Texas and any state in the South. Believe it or not, 35 percent of New York’s electorate voted for Bush in 2000, but maybe they all hailed from a single upstate county. I don’t recall Rush Limbaugh’s comments at the time—I haven’t listened to that man’s heinous radio show since the ’94 elections—but they were probably just as ludicrous and inflammatory.

I understand that the red/blue shorthand is convenient for the media, but it’s not helpful, and reduces people to caricatures. For example, I haven’t supported a Democrat for president since George McGovern in 1972—the exuberance of youth; I was 17 and the Nixon camp’s derisory chant that the hapless South Dakotan stood for “acid, amnesty and abortion” didn’t sound so bad to me—so I guess that makes me a Red Stater, even though I live in Maryland. Even though I’ve never been to a NASCAR event (I’d like to, though); even though our family patronizes Starbucks and Whole Foods; even though I favor lenient immigration reform, gay marriage, marijuana legalization; and even though I find incoming Speaker of the House John Boehner an old-fashioned Beltway hack.

On the other hand, what’s a little waterboarding between enemies? (It’s not as if the U.S. military first used “enhanced interrogation” during Bush’s presidency, and no such practices were employed during Vietnam, Korea and World War II, to say nothing of FDR’s chucking Japanese-Americans into “internment camps” and Woodrow Wilson suspending the First Amendment during World War I.)

And I’m for a flat tax: no loopholes (which are used almost exclusively by the very wealthy), exempt the first $30,000 of income from taxation for a family of four, and allow Americans to file on a postcard or online. That’d add scads of accountants and tax lawyers to the ranks of the unemployed, but in the early days of 2011 when the Democrats and their media enablers are pushing the “income inequality” theme for next year’s presidential election, I think an overhaul of the IRS ought to be given priority. Similarly, millions of reliable Democrats are misrepresented as pure “blue,” although they might eat at McDonald’s, go to church every Sunday, drink instant coffee and favor an even more vigorous military campaign in Afghanistan.

It’s really a trifling proposal—eliminating the “red” and “blue” from the language of politics—when you think about it. After all, not all Americans—Paul Krugman’s views notwithstanding—are yet automatons with the exact same political views.