Johnny Rotten's got no problem with the soon-to-be-married Prince William. The Bishop of Willesden on the other hand... 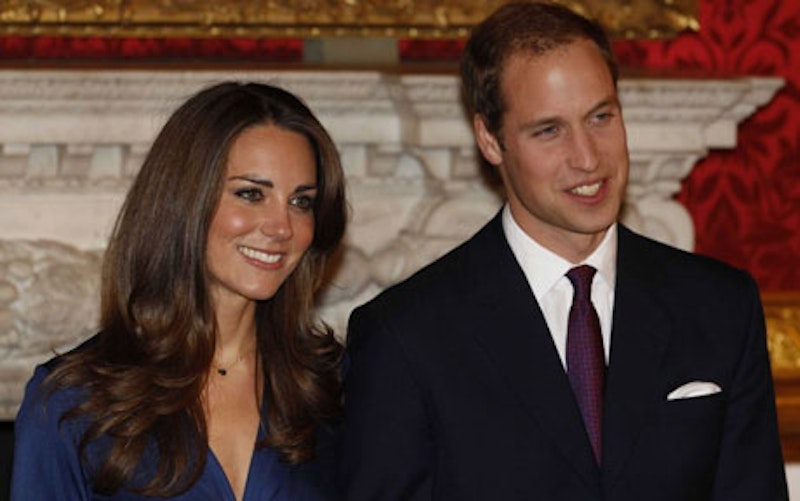 John Lydon and the Bishop of Willesden have voiced diametrically opposed opinions on the forthcoming nuptials of Prince William and Kate Middleton, though not in the manner that you’d think.

“When I heard William had popped the question to Kate, I had a nice cup of tea for them,” Lydon wrote in The Sun last week. “Later on, I might even put some bucks fizz in my veins in their honour. This is a beautiful love story and I like that. He's done very well for himself—she's bang on the money!”

Meanwhile, the Right Reverend Pete Broadbent, Bishop of Willesden for the Church of England, took to Facebook to share his own views about the happy couple. The wedding of William, who stands to one day be head of the COE, is “nauseating tosh” and “national flimflam paid for by our taxes,” Broadbent posted.

“Talent isn’t passed on through people’s bloodstock,” the Right Rev continued. “The hereditary principle is corrupt and sexist. As with most shallow celebrities they will be set up to fail by the gutter Press ... I give the marriage seven years.”

The predictable uproar about Broadbent—who also dismissed the last high-profile royal wedding with “I managed to avoid the last disaster in slow motion between Big Ears and the Porcelain Doll, and I hope to avoid this one too”—has just as predictably resulted in his apology. “I recognise that the tone of my language and the content of what I said were deeply offensive, and I apologise unreservedly for the hurt caused… I wish Prince William and Kate Middleton a happy and lifelong marriage, and will hold them in my prayers.”

No word on what the suddenly cuddly Lydon (“Willy and Katy look like they are genuinely in love and that's all I look for”) thinks of the Broadbent episode, but really: In your wildest dreams, would you have imagined the writer of the Sex Pistols classic “God Save the Queen” swanning about how “They really appear to have stars in their eyes” while a bishop grouses about the “corrupt and sexist” whose history as “philanderers” have ended up costing the nation “an arm and a leg”?

Lydon goes on to point out how he doesn’t object to the Royals as people, just as an institution, which is certainly as it should be. Here in the States we’re not required to underwrite the foibles of Liz, Phil, Chuck and the rest of the capering clan, though like most of the world we seem to be largely enthralled by the supposed “fairy tale” qualities of royal romance.

Why do we care? Metric tons of ink, actual and virtual, have been spent on the topic, and nobody seems to know for sure. If the misadventures of Squidgy, and Charles’ telling Camilla Parker-Bowles that he’d like to be reincarnated as her tampon, couldn’t kill this fascination, nothing will.

That the ubiquitous Diana became even more omnipresent after her divorce—and, for a time anyway, exponentially more so after her death—should also have cured us of this morbid (in all senses) attraction to those who hold only symbolic legal power over the subjects of a country from which we took some pains to extricate ourselves some 234 years ago.

With the morning news shows, as well as the likes of Entertainment Tonight, giving us breathless daily updates, we can pretty much resign ourselves to being Will-and-Kate’d to figurative death until they actually tie the knot. How much tabloid stalking will go on afterwards is anyone’s guess; after all, William’s not as presumptive an heir as is his father, although the apparently immortal Elizabeth II is still showing no signs of going anywhere soon.

Underlying all this is the fact that the affianced are, in fact, two human beings. (One of whom, of course, is a very, very rich one, but still.) “Being born into the Royal Family is like being born into a mental asylum,” Lydon wrote. “Marrying into it is not something to be taken lightly.”

With luck, both ours and theirs, the pair will be able to stay in the shadows, undertake whatever good works they choose with a minimum of pomp and PR effort, and, generally, be as boring as possible.

You know, as a politically impotent king-in-waiting and his lady should be.