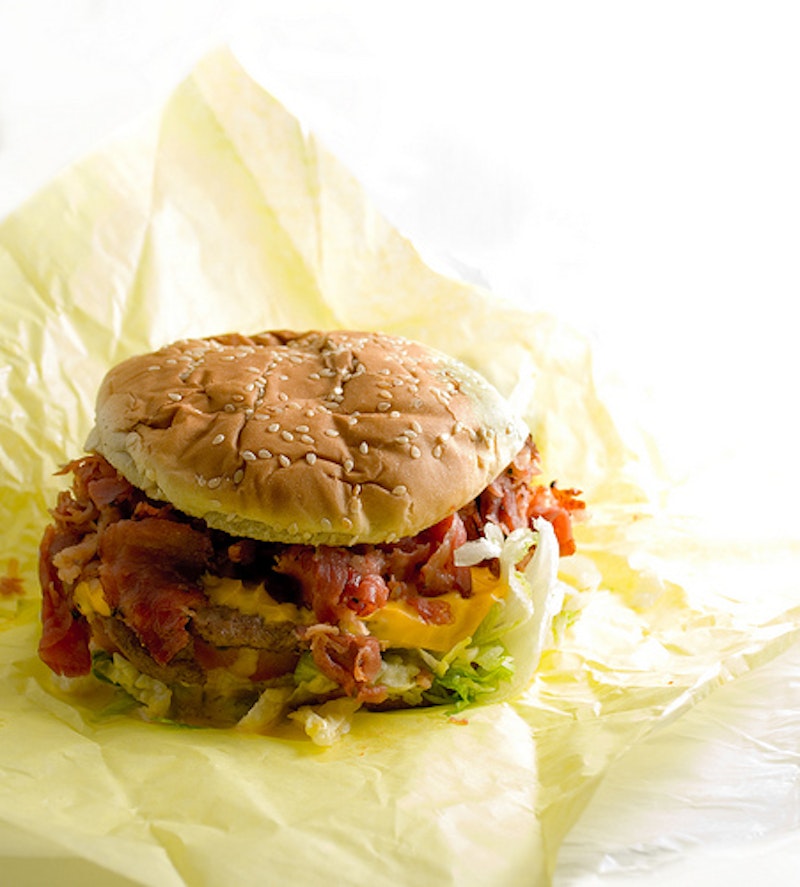 Think about the people who tell you to buy their products. Many Americans grew up watching Ronald McDonald saying that Chicken McNuggets were just about the greatest food ever conceived. The Trix Rabbit’s countless failed attempts to get a bowl of our cereal made us cherish each sugary bite. Now think about those old commercials from the 1950s, when Fred Flintstone and Barney Rubble light up a Chesterfield in the backyard or Lucille Ball makes Ricky happy by handing him a Phillip Morris cigarette. Why does one seem innocent and the other strangely evil? Imagine for a moment if history had played out differently, if respective epidemics were sensationalized at opposite times and a generation of Americans grew up with an alternative version of the demonized Big Tobacco industry.

1920s-1940s
Despite attempts by state governments to regulate and even ban junk food, consumption skyrockets. The popularity of chips, soda and French fries sweeps the nation and children grow up watching American soldiers enjoy a fried chicken drumstick while fighting the Nazis. Saturated fats and sugars are accepted as a staple of the American economy and way of life, backed by a booming, profitable industry, and although belts are beginning to widen, no one seems to notice or care.

1950s
Scattered reports from the American Medical Association linking unhealthy diets to cardiovascular disease, hypertension, Type 2 diabetes and obesity begin to gain relevance. These findings get picked up by the press which frames the trend as an epidemic, giving rise to an “obesity scare” which sweeps the nation. Snack companies and fast food chains scramble to keep their businesses alive, introducing products with lower levels of high fructose corn syrup and saturated fats, marketed as “a safer snack.” For the time being, this measure is effective and by the end of the decade, junk food consumption reaches unparalleled levels.

1960s
In 1964, a group of 10 experts appointed by the Surgeon General issue a report that summarizes all existing studies on energy-dense, large-portion diets linked to obesity and declare them a health hazard to the American public. The Federal Trade Commission responds a year later by mandating that all food products with unhealthy levels of fats, carbohydrates and sugars be affixed with a warning label, reading: “Caution: Consumption May Be Hazardous to Your Health,” and all food products must meet a nationally-imposed “health standard” to escape this label. Rallying from the momentum of the report, the FTC issues a short-lived restriction on junk food and fast food companies’ ability to advertise their unhealthy food products as being “safer” than any other similar brands. By the end of the decade, these companies are no longer allowed to advertise their products on television.

By this time, the fast food and junk food industries are demonized in American society. Marketing icons aimed at children such as Ronald McDonald, Cap’n Crunch and the Keebler Elves disappear from billboards and television commercials, becoming relics of a dark period in American popular culture.

1970s
Seeing a threat to their business, a large and extremely influential collective fast food and junk food lobby, backed by the corn industry, hits Washington and manages to have unhealthy food products excluded from five major regulations on hazardous and toxic substances.

The post-Watergate election of 1974 ushers in a generation of liberal Congressmen, granted with the unique opportunity for legislative entrepreneurship, among which was a liberal Democrat from Beverly Hills by the name of Henry Waxman. Waxman would eventually become the founder of almost every piece of legislation attacking junk food and fast food companies over the next 20 years.

1980s
In 1982, Congress doubles the tax on food products that fail to meet the mandated “health standard” from eight cents to 16 cents, which will increase to 20 in 1990 and 24 in 1993, significantly increasing the price of fast food menus, and almost leveling them with the price of healthy groceries.

The fast food lobby rapidly loses ground as obesity becomes a priority on the legislative agenda. As the issue escalates, three influential public health organizations, the American Heart Association, the American Diabetes Association and the American Osteopathic Association, form “The Coalition on Junk Food OR Health” with the intent to counter the fast food lobby in Washington. They appoint Matthew Myers, a highly-credentialed former ACLU lawyer who had spearheaded the attack on fast food advertising, to lead the campaign.

Between 1982 and 1983, American consumption of fast food drops by about 30 billion customers.

Legislation against the now-weakened junk and fast food industries slows in the 90s, but in the 40-year process, these industries see profits cut almost in half. Cultural and social norms began to take effect as the demonization of the industry spreads to the user. By the new millennium, the man enjoying a double cheeseburger or a bag of potato chips becomes a pariah, scorned by the health-conscious population.

2000s
Despite a history of regulation and litigation to eliminate unhealthy consumption, despite millions of dollars devoted to advertising, promotion and education, obesity remains a significant problem in American society. In 2008, yet another FDA regulation is imposed upon the now-crippled junk and fast food industries, mandating that their products’ labels be almost completely covered by pictures of morbidly obese Americans, diseased hearts, stroke victims and diabetics with amputated extremities. Junk food is far from a cultural norm and will possibly phase out more and more with each generation, but it’s still a habit adopted by thousands of Americans, despite the fact that the health risks associated with it have become common knowledge.

There’s no question that lung cancer is an extremely dangerous disease and that the efforts of legislators throughout the 20th century probably saved thousands of lives. But maybe it’s time to recognize that America has gained as close a victory in the war against tobacco as it is going to get. Fred Flintstone is no longer telling children that cigarettes are dandy; no one lights up thinking that they’re making a good health decision. However, thousands of Americans shovel down globules of sugar-coated grease and fat on a daily basis and cartoon characters are still singing about it.

Big Tobacco has spent the past 60 years suffering a gauntlet of regulation, the effects of which will eventually drive it to the ground while another equally destructive industry used similar marketing techniques to deliver equally unhealthy products to Americans resulting in similar if not more dangerous health effects. Comparing the two epidemics is obviously not that simple and it is difficult to cast blame for America’s obesity when the problem results from a combination of many different factors. However, there are ways to address the problem, or at least to get started, and at this point it seems time to stop flogging the traditional bad guys, shift the public health agenda, and focus on the next fat elephant in the room.