The President needs to use the issue of the Bush tax cuts as an opportunity to show his strength. 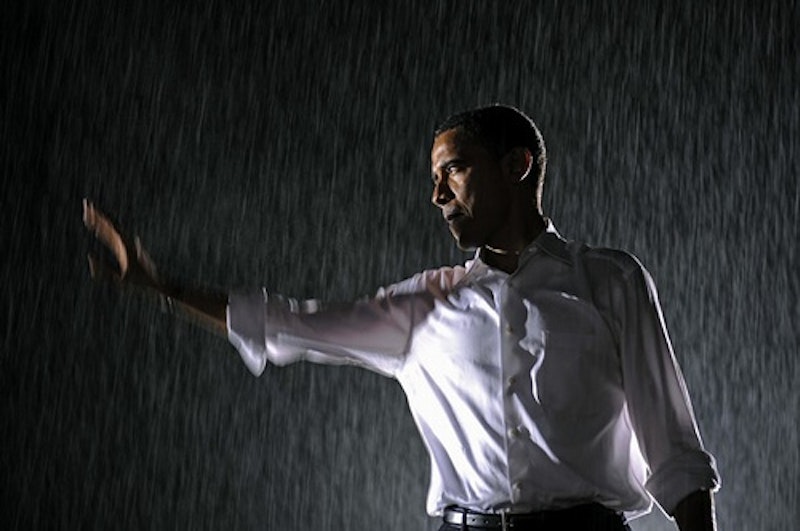 If President Obama collapses on the Bush tax cuts, he either doesn’t understand the power of the presidency or doesn’t want to use it to set the tone and the tactic for the political showdown of his life. It’s the one issue where he can draw a clear line between Democrats and Republicans: Whose side are you on, the average American’s or the Wall Street billionaires? Nancy Pelosi gets it. Steny Hoyer gets it. Even Harry Reid gets it. So why doesn’t Obama?

Well, a remarkable event has occurred. In a reverse of the usual Washington power play, the Democratic leaders of Congress have told Obama publicly and bluntly that he will have to assert his leadership to salvage the middle class tax cuts before the end of the year. This is his last chance.

Bipartisanship is baloney. When you’ve got power, you use it. The only abuse of power is having it and not using it. And until early in January, Democrats will still control both houses of Congress, by a wide majority in the House and just shy of 60 votes in the Senate. Obama’s willingness to toady up to Republicans is baffling, kind of like waving the white flag on the matter of tax cuts, when the GOP leadership seems intent on embarrassing the President into hasty submission. He invited them to dinner at the White House and they cancelled because of scheduling conflicts, which is the polite way of telling Obama to stuff it. Republicans learned early in the Obama Administration that if they push the president around he won’t push back.

The Bush tax cuts the Democrats want to slice and dice involve the top one percent of earners in America—millionaires, billionaires, the Warren Buffetts and the Bill Gates’ of the nation. Everyone earning less than $250,000 would retain the tax cuts which expire automatically on December 31. Those making more than $250,000 would be excluded from the cuts and pay a higher rate. Extending the tax cut to high income earners above the $250,000 cut-off would amount to giving $70 billion a year to those who don’t need it and worse, who won’t spend it to help churn the economy back to vibrancy. Those folks pay lobbyists and tax lawyers to devise angles and loopholes to shelter their loot.

Call it class warfare because that’s exactly what the tax code is—all 13,458 pages, in 20 volumes, available from the U.S. Government printing office for $974. It’s written by and for those who would benefit from extending the entire Bush tax cut. What’s even more dangerous about perpetuating the high income cut is that it further contributes to the imbalance of wealth by concentrating it in the hands of the few to the deprivation of the many. To wit: With 17 million people out of work, Republicans once again have blocked the extension of unemployment benefits for two million Americans, one of the surest ways of getting money into the hands of those who’ll spend it. This occurred a week before Thanksgiving and five weeks before Christmas. The GOP apparently views continued economic distress as their passport back into the White House.

Where Obama officially stands is muddled by his own and his Administration’s garbled messaging on an issue that is as emphatically Democratic as the New Deal. First, Obama said he was firmly committed to allowing the tax cut to expire for high earners while the breaks would continue for those below the magic number. That commitment was as firm as Jell-O. As soon as Republicans pushed back, Obama signaled that there was room for compromise. Then David Axelrod, his counselor and rapmaster, offered the usual hallucinogenic talk of bipartisanship and compromise. And when Obama attempted to back-step from Axelrod’s comments, the issue became as murky as the polluted depths of the Potomac River.

So just what is going on here? This is a knife fight, a street rumble, and not a genteel game of lawn croquet. The weapons are switchblades and it’s clear that the Republicans intend to use theirs when they take over Congress in January. Short of the face-to-face business of politics that usually get things done, the power of the presidency is awesome. The president has in his tool kit executive orders, agency and departmental rules and the most lethal of all, the presidential veto. He also should have in his top desk drawer a list of pork projects and earmarks for every Congressional district in America, which can be cancelled or delayed or even defunded at the snap of a presidential finger. These are all end-runs around the intransigence and paralysis that is gripping Washington, conceived and enshrined for one purpose—to be used as a display of executive ballsmanship.

One Republican argument for extending the tax cut beyond $250,000 is the durable GOP fable that it helps small business. That, too, is baloney. It’s difficult to determine exactly what a small business is other than a possible tax dodge. The Small Business Administration classifies a small business as one with 25 to 500 employees. Another measure is not the number of employees but its list of owners. For example, the multi-billion dollar oil business privately owned by the Kohl Brothers is a small business because it has only two owners, more than likely the constituency the Republicans are attempting to protect.

Another audible guffaw is prompted by the duck-and-cover antics of the Tea Party winners who want no association with the budget cuts they campaigned for. Few, if any, of the Twining group are eager to accept seats on the House Appropriations Committee, usually a coveted assignment, where adjustments will have to be made to education, Social Security, Medicare and other cherished programs that they promised to dismantle. They’re as phony as the Astroturf cover they ran under. And it was also interesting to note that not a single Tea Party member spoke out in favor of the cuts and limits being promulgated by a commission studying ways of cutting the long-term debt and the deficit. The commission’s preliminary recommendations also target sacrosanct social programs. The GOP, also in a hollow display of meaningless mush, adopted a non-binding resolution in opposition to earmarks. Earmarks make up only three-tenths of one percent of the budget. And non-binding means they’ll take them when they need them, probably for bragging rights around election time.

While Obama and crew do their haphazard intellectualizing out loud, it has been Nancy Pelosi and other Democratic leaders who have suffered the grief that Obama has thrust upon them. They were doing what Congressional leaders do—trolling for votes to adopt the president’s agenda. It’s called leadership. The most important four letters in the word leadership are l-e-a-d. The electorate did not send a clear signal to do one thing or the other. They were merely blowing off steam, as they do every two years, especially in the off years. Most people vote out of frustration on their own circumstances and not because they favor one party or the other. The party in power has remained in total control in the off-year elections only twice in the past 75 years. In politics, there is no such thing as a mandate. There is only one reality—having the votes, 218 in the House and 60 (under present filibuster rules) in the Senate.

Obama and the Democrats have the votes for the next six weeks. Lyndon Johnson knew what to do when he had the votes. So, too, did Franklin Delano Roosevelt and even Obama’s hero, Abraham Lincoln. It’s cojones time. Either Obama has them or he doesn’t. And if he has them, it’s time to rattle his junk.