And why we're all losers. 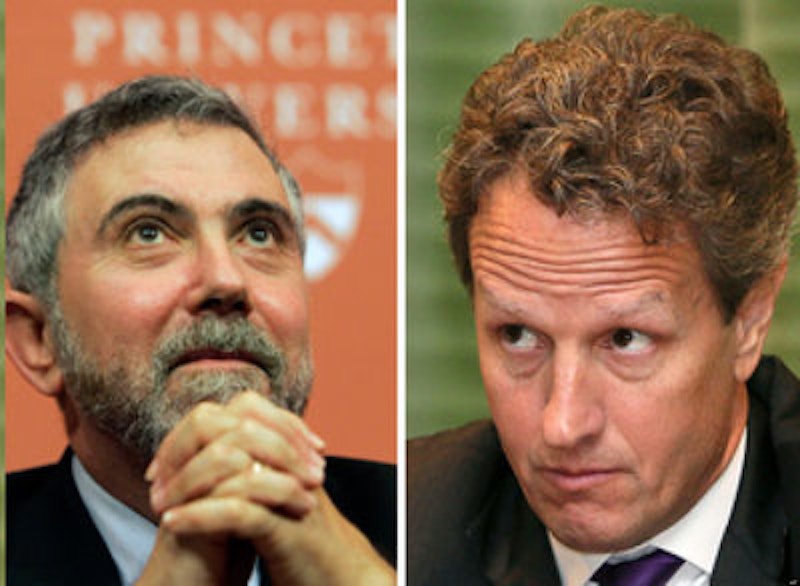 “He was right; I was wrong,” Paul Krugman says handsomely in his review of Stress Test, Timothy Geithner's book about saving Wall Street and the nation's banks. During the terrible crisis of 2008 and 2009, Krugman maintained that the government should run the banks until the public decided it could trust them again. Geithner, the country's new Treasury secretary, disagreed with the columnist. He went with the fast-and-simple approach of the “stress test,” by which the government would simply test the banks' fiscal durability and post the results. Geithner believed that the public would be reassured by the banks' passing grades and that the crisis would accordingly wind down.

“And so it proved,” Krugman now concedes to readers of The New York Review of Books. Krugman hails the “triumph of the stress test.” In fact, he considers Geithner's rescue of America's financial sector to be remarkably cheap, and puzzles over the “mystery” of the low price tag that resulted from ignoring his advice. The savings and loan meltdown of the Reagan era “ended up costing taxpayers around 5 percent of GDP,” Krugman writes. “But the cleanup from the biggest financial crisis since the 1930s ended up costing less than a tenth of that.”

Five years ago Geithner was a punchline. He was routinely called a “putz,” a “shithead” and a “penis on wheels” (to memory-quote from Shit My Dad Says). Everybody knew he was blowing the rescue. Now a highly-touted expert tells us he was outperforming the field. Geithner's titanic rescue operation was better than most titanic rescue operations, especially for cost to the public. If you have a mutual fund it's worth taking note of all this, and any taxpayer can appreciate the reduced shafting we received.

And yet... There were two recoveries in 2009. One, the rescue of the financial sector, was an A-plus job. The other, the recovery granted the run-of-the-mill economy, the economy in which people show up for work and hope to buy a house—that was a bit of a flop. As Paulie Walnuts said when Christopher dropped trou, “I guess that's a dick.” And I guess this is a recovery. After six years, unemployment is at last down to 6.1 percent. That's good next to Europe or Japan, and world-historic compared with the figure a Wall Street collapse would have given us. But it's still pretty lousy.

Krugman suggests that Geithner bears major blame for the flop, and that he is trying to shift such blame with make-pretend in his memoir. For example, Krugman tells us, Geithner says in Stress Test that he was all for a big stimulus package, anything to get the economy going. Krugman swats down the claim by pointing to a memo placed on President-elect Obama's desk. “An excessive recovery package could spook markets or the public and be counterproductive,” the memo says, and Krugman tells us it “reflected a lot of input from Geithner.” Did it? Well, Geithner was Treasury secretary and they worry about the markets.

Krugman figures that Geithner was pushing against a big government program to bail out the economy, and that this opposition made a difference. Not that Krugman knows for sure (he even has to rope in evidence from a George W. Bush appointee), but he can see where the trail lies. Back in the dark days of 2009, Krugman and others said the economy's big problem was the debt that private citizens had taken on; instead of spending, the citizens were paying down their credit cards and mortgages, with withering effects for economic activity. That interpretation was rejected by the decision makers, of whom Geithner was a key name, and now the economy is still limping along and Geithner wants us to know he just couldn't get Washington to do anything more. Krugman laughs at his pretensions.

But is Geithner really to blame? Krugman zeros in on him, since they are rivals and since Geithner was the decision maker among decision makers when it came to telling Obama what to do about the economy. And yet Krugman relents. When it comes time for the windup, he zooms out and talks about the system. “We can argue about how much of the blame rests with the Obama team,” Krugman says, “how much with the crazies in Congress who met every administration initiative, no matter how reasonable, with scorched-earth opposition. But the overall grade seems clear. We didn’t pass the test—we failed, badly.”

At this level, way high up, I think we can spot something: America's elite gets the best stuff, including the best political institutions. Krugman is very suspicious about an odd turnaround in Geithner's behavior as reported in Stress Test. On the one hand, there's the can-do, enterprising team captain who manhandles the rulebook so the ruling class can rig together a financial rescue. Then there's the gormless finger-sucker who stands by as Congress fumbles away his hopes for a real economic recovery. Krugman figures the second part of the story is a crock. But Treasury secretaries don't know Congress. They know how to work the small and powerful world of banks and regulators. They don't know the sprawling and dilapidated apparatus (or tangle of apparatuses) used for passing federal legislation. Other people, like the vice president, were carrying the ball.

Did they fail? Well, it depends how you balance the factors. The right-wing crazies, the heartland Democratic senators who postured for the folks back home (Claire McCaskill, the party's triumphant addition to the Senate in 2006, kept trying to whittle down the stimulus package by Tweet), the political media's herd belief that the federal debt was destroying the economy... Geithner aside, whether he's a good guy or a bad guy, America's elite had the sleek institution that handled, that did what the driver wanted and got him where he was going. The rest of us had Congress. Now we have 6.1 percent unemployment and we'd better like it.