The Times’ pundit puts the Hobby Lobby case in perspective. 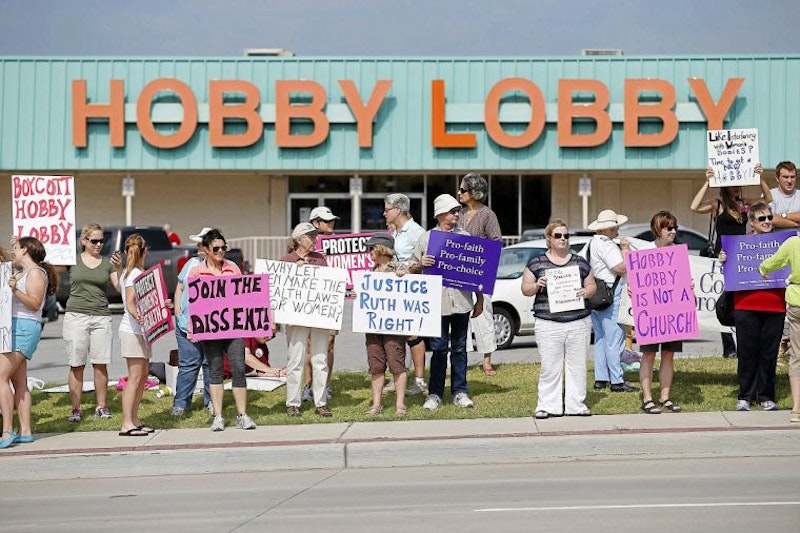 There’s no telling how New York Times editorial page editor Andrew Rosenthal really feels about his op-ed columnist Ross Douthat, the token contributor on those pages who doesn’t always hew to the daily’s increasingly liberal orthodoxy. I suspect he’s viewed as a necessary evil—for now, at least, the Times keeps up appearances by publishing the occasional dissenting opinion—with the hope that Douthat will eventually “evolve” into the wimpy conservative-in-name-only kind of writer such as the marginalized and regularly lampooned David Brooks. Largely, that moment has arrived and I've written as much in this space on several occasions as Douthat, who’s just 34 but holds forth twice a week like a man approaching his 60th birthday.

But credit where it’s due: Douthat’s July 6th column about Hobby Lobby achieved what I thought was nearly impossible after the hundreds of thousands of words—perhaps millions—were dashed off in the wake of the Supreme Court’s 5-4 decision to exempt the Christian-owned corporation from offering contraceptives in its employees’ healthcare package. By this point, my eyes usually glaze over any article about Obamacare, either from a liberal or conservative soapbox, mostly because the law has passed and it’s time to move on. Congressional Republicans who continue to bleat about repealing the still-confusing mandate do more harm to their Party than good: they sound like sore losers (which turns off voters), and in any case, by focusing on electing a GOP Senate this year, and then a Republican president in 2016, that’ll be the time to at least limit the most onerous regulations—and there are many in the multi-thousand page bill passed in 2010 that was actually read in entirety by one or two legislators voting yay or nay by few—if and when that scenario unfolds.

Perhaps it was this in-and-out survey of the Hobby ruling that was so inundated with fury by both sides that I missed what seemed incredible, but Douthat noted: Hobby Lobby’s minimum wage for fulltime workers is $15/hr., far above the $10.10 minimum that Obama, when he’s in the mood, advocates at public forums. Contrast that to the environmentally/progressive/good karma company Starbucks, whose average worker salary doesn’t exceed $9/hr. Douthat writes: “A retail chain with nearly 600 stores and 13,000 workers, this business sets its lowest full-time wage at $15 an hour and raised wages steadily through the stagnant postrecession years. (Its do-gooder policies also include donating 10 percent of its profits to charity and giving all employees Sunday off.) And the chain is thriving commercially—offering, as [left-wing website Demos] put it, a clear example of how ‘doing good for workers can also mean doing good for business.’”

Lord, you’d think Hobby was owned by Warren Buffett, that billionaire who’s cleverly ingratiated himself with liberals while recording record profits almost every year. By the way, would it be too cynical to say that Buffett prophylactically cozied up to Obama to keep the Justice Dept. at bay over any perceived or actual misdeeds at his Berkshire Hathaway? No.

And, just before Douthat, a practicing Catholic, loses me in a long defense of religious organizations, a topic I’ve never waded into deeply, he makes another astute observation: “So the recent Supreme Court ruling offers a chance, after the hysteria cools and the Taliban hypotheticals grow stale, for liberals to pause and consider the long-term implications of this culture-war campaign.”

I’ve seen a lot of the “Boycott Hobby” petitions and anti-religious screeds—they’re hard to avoid if you spend even a small amount of time on Facebook or Twitter—and it’s hard to ignore a very simple conclusion. If you’re a woman who’s aggrieved by the Supreme Court’s ruling, don’t work at Hobby, and migrate to another company that’s more “progressive.” One would think that a $15/hr. minimum wage for fulltime employees covers a multitude of, ahem, sins, but the country still operates under the concept of a free marketplace.