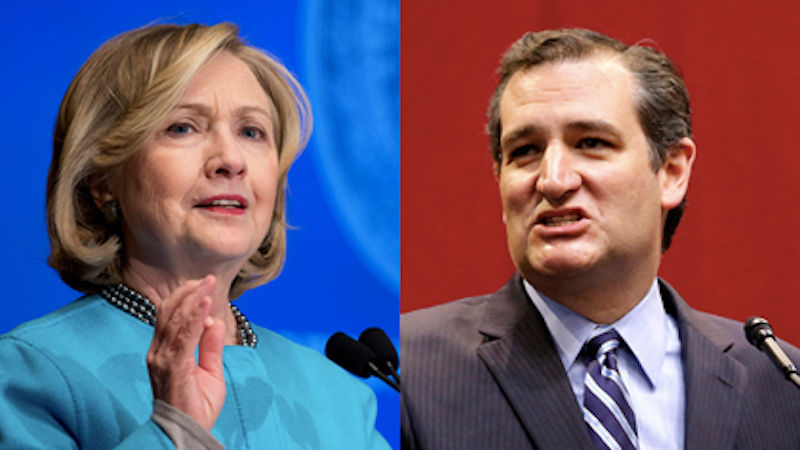 One of the perpetual mysteries of the American political landscape is the resilience of the Clinton political machine. Even as the charismatic persona of Bill Clinton has inexorably folded into the gaping maw of his wife's insatiable ambition, we remain beholden as a nation to a dynasty that began four decades ago in an Arkansas city with barely 200,000 residents. Despite his wife's political tone deafness, inability to anticipate or respond to potentially crippling challenges, and a persistent public distrust of her motives, Hillary Clinton has managed to position herself as the presumptive Democratic nominee for the 2016 presidential contest.

A few weeks before the Iowa Caucuses, Clinton is trailing hometown favorite Bernie Sanders in the state of New Hampshire. You need only stroll through some of the hipper enclaves of Williamsburg, or pass a few of the cars parked across from the brownstones of Park Slope—which sport Bernie bumper stickers placed above decrepit Howard Dean ads—in order to appreciate the zeitgeist Clinton's chief opponent has seized upon. If she represents everything that's wrong with the Democratic Party—and by extension, American political discourse—ruthless political opportunism, cynical exploitation of the law for personal enrichment and aggrandizement, and constant deception and manipulation of the public, then he embodies everything (idealistic) Democratic partisans see in themselves.

For all the apparent radicalism of Sanders the public figure, Sanders the presidential candidate has run a quintessentially conservative—albeit, leftist-campaign. Rather than rely upon a vast network of consultants, data-gatherers, spinmeisters, Web gurus, and flacks, he’s decided to create what amounts to a national grassroots organization that relies upon a simple, beguiling promise. Namely, that he can use the machinery of the federal government—in this case, the executive branch—to make all of our lives easier.

The beauty of this promise is that Sanders believes it! In many ways—and this isn't a novel observation—Bernie Sanders is the democratic socialist analogue to libertarian Republican Ron Paul. An economically illiterate, yet equally sincere, pro-government version of the man who temporarily disrupted the status quo of the Republican Party in 2012. A man who’s selling a very coherent, very simple, yet broadly appealing message which the decision-makers within the Democratic Party would rather not hear. However, like Paul—and through no fault of his own—I believe Sanders is not going to score an historic upset against his party's current frontrunner. Not simply because it cuts against the grain of history, but because Hillary Clinton, in spite of her many flaws, both in character and political perception, has two decisive advantages over the men seeking to dethrone her. The immensity of her war machine and the relentlessness of an individual who has sought this office for the better part of her adult life are hard to overcome.

Even though she has none of the charisma of the president whose downfall she sought—and very few of his political instincts—she possesses one Nixonian trait that I believe makes her victory inevitable. No, not an implacable paranoia fed by sycophantic lackeys who would have difficulty finding employment in any other sector of the economy—although Sidney Blumenthal would’ve thrived within the milieu of Haldeman, Ehrlichman and Dean—but an unflagging will. A singular inability to give in and accept defeat, regardless of how beaten down she is. This is the characteristic, above any other, which defines Hillary Clinton the politician.

The parallels between her and Nixon are striking in this regard. Nixon refused to give in, even as the D.C. elites had him in their sights during what was perceived as a fatal overreach, i.e. his pursuit of Soviet spy Alger Hiss. He soldiered on even after being sidelined by the very man who had chosen him as his running mate, and weathered the most humiliating political defeat of his life in his native state, being consigned to political oblivion by his nemeses in the press and yet persisting in his quest for political redemption.

For all her flaws, Hillary Clinton is the only candidate in the current presidential race who has a similar makeup to one of the most resilient American statesmen of the 20th century. She has the self-pitying, vindictive nature of Nixon as well, as her response to any remotely critical article or comment during this race and past campaigns demonstrates. Whereas Nixon perceived—correctly, in some circumstances—his humble origins and conservative philosophy to be a target of disdain from the elite circles he was shut out of, Clinton instinctively shields herself within the carapace of womanhood, and ascribes any criticism, whether legitimate or not, to the misogyny of her opponents whenever she finds herself under attack.

However, she also shares one of his most admirable traits. Specifically, his ability to survive and thrive in the face of what most politicians would view as a catastrophic defeat. A woman who—like her husband—has an outsized self-regard, yet was able to humble herself by traipsing across Rensselaer County and stumping for votes in localities which she undoubtedly viewed with the same contempt as the towns she visited as First Lady of Arkansas. Someone whose husband humiliated her in front of a global audience, and who imperiled both of their political futures, but who managed to transform herself into an electable figure nonetheless. Unlike her successor, Clinton undoubtedly viewed a sinecure at the State Department as a demotion, yet she was able to utilize that subordinate position as a platform to rebrand her tarnished public identity.

That’s why she will be the next Democratic nominee for president. As the late President Nixon once said, "A man is not finished when he is defeated, but when he quits," and there is no quit in the political vocabulary of Clinton. Running for this office, and wielding the power that comes with occupying the White House, is her raison d'être, and has been for the balance of her life. To borrow a phrase from Margaret Thatcher, there is no alternative.

Figuring out who will be her Republican opponent next year is a more imposing task, which is why I'm tackling that question last. 2016 is arguably the first primary cycle since the turn of the century where there is no presumed heir to the GOP nomination. Even in 2000, George W. Bush carried the imprimatur of the Republican establishment, party benefactors, and Christian conservatives. A coalition that lent credence to the impression that he was the heir apparent, despite a vigorous challenge from John McCain. The Dubya role might very well have been played by his younger brother this time around, were the country not still recovering from Bush fatigue and had Jeb not run a campaign whose only parallel, in terms of sheer ineptitude, is the disastrous Giuliani bid for president in 2008.

However, we find ourselves in a situation where the leading candidate in the GOP race for the White House is a mercurial corporate magnate whose own party affiliation was in question until he officially declared his candidacy. The Donald Trump phenomenon should be looked at through the prism of the two major parties' decades-long repudiation of the American public's beliefs. Whether it’s a skepticism about nation-building exercises, particularly in the Middle East, or reluctance to embrace the bipartisan consensus behind unfettered immigration from the developing world, the ideas shared by a large portion of the electorate have been repeatedly dismissed, and demonized, by the people who have been entrusted with formulating public policy in the nation's capital.

So it should come as no surprise that someone who enunciates the beliefs of the silent majority, if only for personal aggrandizement, should garner the support of prospective voters, particularly those who identify with the opposition party. Those who most lament the ascendency of Trump fail to recognize that they are his chief enablers. They decry the popularity of an oleaginous carnival barker, yet refuse to acknowledge their role in silencing the eloquent voices dissenting from the current bien pensant view of immigration, including the thoughtful, dedicated Sen. Jeff Sessions. There wouldn’t have been a Trump campaign were it not for the past statements and deeds of Boehner, McConnell, Kasich, et. al.

Yet I don't believe Trump, despite his superficially alluring persona as a rogue billionaire, will become the next GOP presidential nominee. That honor—or albatross, depending upon circumstance—will go to Senator Ted Cruz, the man who developed what's turned out to be the wisest strategy when dealing with Trump's perceived momentum, i.e. exploit it for your own benefit. The evolution of Cruz's candidacy is one of the more interesting sub-plots to this presidential primary season. Although viewed as an outsider and usually placed in the same category as Rand Paul as a creature of the Tea Party, I believe Cruz is actually a very traditional, albeit distinctly conservative, politician. Someone whose persona is much more incendiary than his record would lead one to believe.

He's very similar to Elizabeth Warren in this regard, although more principled in practice. She’s the darling of the Netroots/Occupy Wall Street wing of the Democratic Party, despite having the profile of a typical corporatist, albeit, very left wing-Massachusetts Democrat. The ability of Cruz to shed his past support for Chamber of Commerce staples like the H-1B visa program—even going so far as to join with Sen. Sessions in attempting to reform the very program he once championed—while highlighting his differences with establishment candidates on foreign policy and surveillance powers, speaks to his malleability as a politician. This adaptability is one of the chief reasons he stands to inherit not only disaffected supporters of "insurgent" candidates Carly Fiorina and Ben Carson, but also Trump fans.

What would hinder Cruz in a general election, i.e. the public perception—aided in part by media outlets—of him as a reactionary figure, is what will help him to secure the Republican nomination. A man born in Alberta, which was considered the Texas of Canada until the NDP wrested control of the province from the Conservatives, will be the next standard bearer for the Grand Old Party. A Cruz-Clinton general election would be intriguing for a number of policy-related reasons, but the most interesting aspect of this race would be the clear contrast between the public personae of the two candidates.

A man perceived as a rigid ideologue, a doctrinaire conservative whose political career was built upon his unwillingness to compromise his beliefs, facing a woman who is believed—even by many of her supporters—to put the pursuit and retention of power over any fixed ideological principles. Can these candidates turn their biggest liabilities into their greatest assets? Can Cruz replicate the Rove strategy and turn this upcoming presidential race into a base election, despite the increasingly unfavorable electoral map? Can Clinton, like Nixon, overcome a dubious public perception of her ethics through the sheer application of will?

Sorry, but it’s too early to handicap such an odd election.