The Real Fallout from the Jackie Disaster 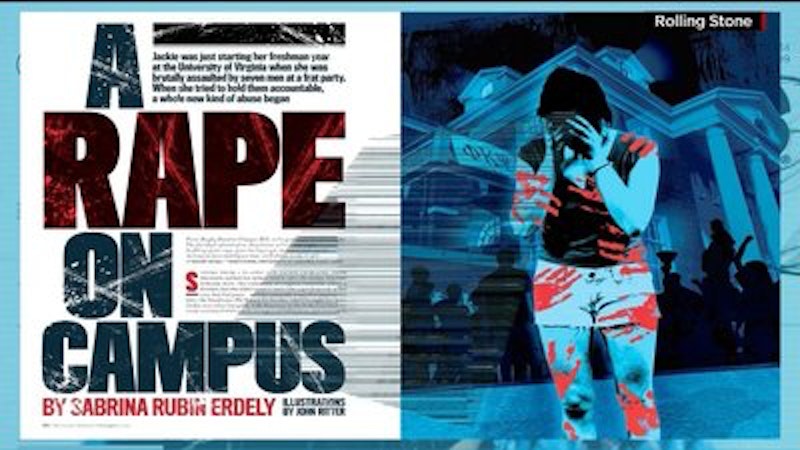 Looking over the past few weeks, there is a very short list of feminist writers who did not make fools of themselves: Hanna Rosin, Allison Benedikt and Amanda Hess come to mind. Amanda Marcotte must snub them dreadfully at Slate office parties. She's more typical of online feminism's response to the Jackie implosion. “Interesting how rape apologists think that if they can 'discredit' one rape story, that means no other rape stories can be true, either,” she tweeted. She didn't say who had made that argument. Maybe some gamers.

Like any great comic, Marcotte has a sense of timing. The day before Rolling Stone announced doubts about its own story, an impatient Marcotte had decided it was time to put another high-profile rape furor into perspective. This was the flap over whether Lena Dunham had been victimized back in her student days at Oberlin. “It’s really time for people to understand that rape denialism is like Holocaust denialism: Broad refusal to accept reality,” Marcotte tweeted. Crying bullshit about a section of Lena Dunham's memoir is like saying Hitler didn't kill six million Jews.

A line of patter has developed that holds sexual assault to be a no-go area for the brain. If a woman says she’s been assaulted, you have to believe her. That's because there's a powerful riptide of the soul that pulls everybody away from facing sexual assault. In fact it drags people right over Patriarchy Falls: give in and you're gone. Evidence for this force appears everywhere. It's why the President says one in four college girls is raped, and why the top fact checker at Rolling Stone, the person who was supposed to stop fantasies from getting published, tweeted this when Jackie's story went out to the world: “So proud of @SabrinaRErdely and @RollingStone and the incredibly brave young women of UVA for coming forward.” (Sabrina Erdely is the story's author, and UVA is the University of Virginia.)

Yep, that's some horrendous force there. It's why the conservative National Review Online greeted publication of the Jackie article with an essay by a professor at the girl's college, an essay in which he described his “horror and outrage ” and declared, “I cannot shake the image of 'Jackie' being serially raped on a broken glass table by a fraternity gang” not far from his office. It's why the same site greeted news of the story's crumbling with an article called “Campus Rape Is Real.” It's why the right-wing blogger Tom Maguire, a dogged follower of the Jackie story's twists and turns, wrote this: “People are most easily duped by a story they want to believe. Just as two weeks ago the tide was running the other way, but [sic] right now there are plenty of people who want to believe that there is nothing at all behind the Rolling Stone story.”

Feminists, or at least that part of the feminist movement devoted to its most high-profile websites, appear to have sold themselves a bogeyman. They want to believe that it's them against the world, firing their tweets into the face of a looming monster. That monster is everyone else, all those people who refuse to admit that rape is real. But the monster holds no such belief. We don't know what happened to Jackie, or anybody else who says they were victimized by a crime that hasn't been investigated. We do know that the ladies at Jezebel, Feministing and Shakesville can't be trusted to understand what they read. We've been told that the Jackie fallout will keep people from believing rape victims. I hope not. I do think it will keep nice liberals from listening to asshole feminists, and it's about time.