Bill Cosby Has Been Unbearable for a Long Time 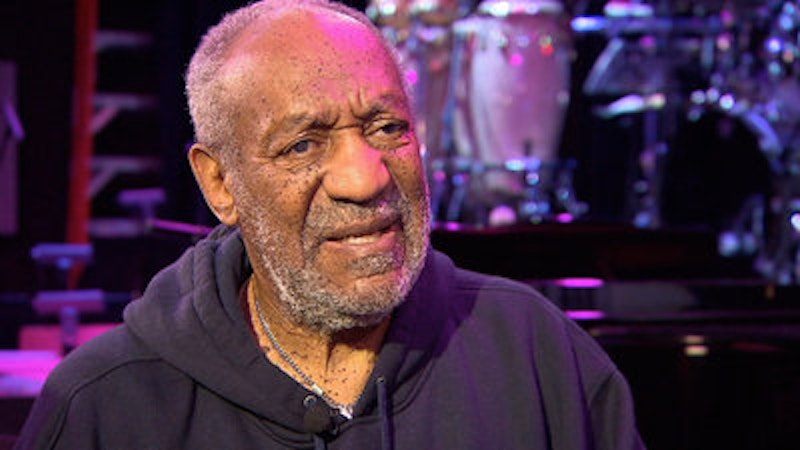 Bill Cosby talked at black people good and long, and many wished that he would choke. “Bill Cosby has the fucking smuggest old-black-man public persona that I hate,” said Hannibal Buress in his fateful comedy routine. “He gets on TV, ‘Pull your pants up, black people, I was on TV in the '80s. I can talk down to you because I had a successful sitcom.’” You know where the quote is going: “Yeah, but you rape women, Bill Cosby, so turn the crazy down a couple notches.” That's how Bill Cosby's career-destroying firestorm began. It got going because nobody likes being talked at by Bill Cosby.

That's why The Cosby Show puzzled me. It was good enough, and it went its own way; it wasn't like other sitcoms. But I couldn't get into it because Cosby himself was such a drag. To watch him was to put up with crap. That blubbering delivery, that looming face like a moose that was brain damaged and proud. You just had to endure him and look at the action around his edges: the kids, the décor. But the kids were always getting their ears chewed off. Cute things but boneless, they were little dollops of self-seeking humanity. He would whip them into young people of character. Watching that process was tiresome and Cosby didn't come off well. He really, really wanted to talk down to those kids. What kind of man longs for a chance to do that?

Such was my reaction, but I was grown up. Young journalists, people who watched the program at the right age, now complain about the shock of the Cos scandals. He's not Dr. Huxtable, they say. They liked Huxtable, that hectoring old beast. So did many other people, enough for The Cosby Show to be one of American TV's great success stories. Beats me. I found Cosby unbearable from the pudding pops on. With the Jello ads, at least, he wasn't talking down to the kids. But the face-pulling and the blubbering had begun, and with Cosby he went to town. Talking baby talk for a living. It was respectable only because it was on national TV. If he weren't making millions from it, he'd be embarrassed.

Early Cos was different. Watch I Spy and you see Cosby in his 30s and just starting the big time. He was deft and had the kind of easiness that leading men long for when they watch Cary Grant. Cosby was the program's number two lead, yet he was better than a sidekick. He wasn't there to point up the star's superiority. Instead Cosby's guy suaved it up alongside the hero; the two of them had byplay. Cosby acted like a lead, it's just that the stories happened to Robert Culp and not to him. Well, of course. This was 1960s TV and Cosby was black. In playing his part Cosby had to be non-threatening but not ingratiating. He had to be comfortable and reassuring, but he couldn't be a smiler, somebody eager to please. And he had to do all this without nullifying himself and becoming a blur. He managed. In fact he did so well that his I Spy performance hit a special level for TV acting. There are TV characters the viewer likes; those characters succeed. But on I Spy, Cosby upped things: he made viewers hope the character would like them.

Of course, Robert Culp described his co-star as the “angriest man I ever met.” The Cosby who was so winning as an actor and comic was already out of his brain with rage. As he got bigger, his rage did not get smaller, not if you go by the rape talk. The allegations start in the late 60s, pick up steam during the 70s, and really charge through the 80s and 90s, his years of superstardom. I think the baby talk grew along with the anger. Traces of it showed up early, in his stand-up act and moments on I Spy when he went mush-mouth while drawling exposition. A few years later and we find a Cosby stage piece about prejudice, a monologue that's like an extended riff on the sound of a voice that can't get started but won't run down. The piece drags on a bit and should’ve been shorter, but it's still remarkable. Explaining himself, Cosby's every-bigot can't work up the energy to get mad. His voice bumbles along with the man's sheepish, no-big-deal reasons for wishing this group or that group just didn't exist. Cosby presents the bigot as invertebrate, somebody below feeling hatred, too stunted and sluggish to face grown-up demands like voice production or understanding one's place in the universe. He wants everyone else gone for reasons that are barely reasons; meanwhile, his voice seems to grow fuzz as he talks.

At some point the standard Cos, the man who went out and told jokes and pitched products, gave up on talking with form. He mush-mouthed until baby talk became his thing, with stupendous results financially. The crossover occurred between the bigot monologue and the first pudding pop ads, meaning sometime during the 70s. The women's accounts say that back then he traveled with a kit full of pills for dosing his victims; he’d developed a lifestyle that featured the bullying and chemical prizing open of young women. Soon he would become an icon by blubbering at and badgering little kids. Looked at, these activities don't seem so different. They're cousins: one violent, illegal and disgusting; the other non-violent, legal but (to my mind) still disgusting. They're both tedious and involve the grinding down of one person (a woman or child) for the magnification of another, somebody who is already a hulk as it is. And in both cases a lot of arranging is involved: the smaller creature has to be maneuvered into place and then trapped there while getting worked over. The TV Cos would keep going at the kids until they had toughened themselves into principle-girded little adults, or such was the theory. The rape Cos, as described by the alleged victims, broke women down, reduced them. He didn't jump them and use force. He fed them pills that left them drooling and their minds black, and then he did what he wanted.

When you're badgering everybody else to sit up straight and do things right, it looks odd (or ought to) that you talk like you need a bib. The two things are no doubt related. The man who grinds children down while supposedly building them up, a man who (we're told) makes a habit of devolving adult women into disposable lumps, may also be the man who has spent his life fighting a self-destructive drive toward childishness. After all, that's the rationale behind the jawboning about education and discipline: that if society makes you grow up poor and despised, you need a character of iron to keep from becoming a permanent child. Cosby found his answer, one that combines life discipline and oral indiscipline with (it would seem) rape. And a lot of anger.