Cuba Is Bad at Being Totalitarian

The regime's an unjust pain in the ass in many ways. 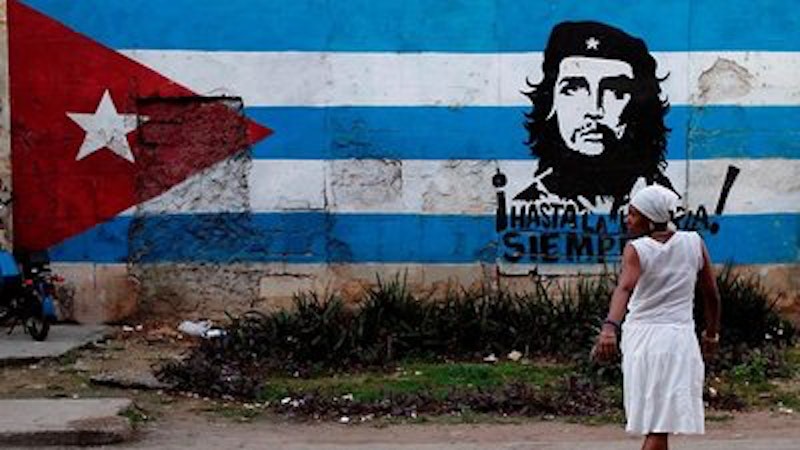 Foreign affairs journalist Jeffrey Goldberg is visiting Cuba. He brought the family, including his boy, and the boy likes to go out and take a look around. One morning:

… he rushed back to the hotel to report on a fascinating conversation. One of the booksellers had asked him, “What do you think of Communism?” We had briefed the children on the nature of totalitarian societies, and on the need to be discreet—especially since I was in Cuba as a journalist, and especially since the government had shown interest in my movements. “What did you say?” I asked. He answered: “I said, 'I think it's interesting,' and then he said, 'Well, I think it's bullshit.'”

They were both right! We can add a couple more adjectives, at least for the Cuban brand of communism. One is lackadaisical and the other is dilapidated. Not just when it comes to providing services, but when it comes to repressing. No, Cuba is not a free society, and the government certainly wouldn't mind being totalitarian. On certain days maybe it tells itself that it is. But it would have to get up a lot earlier in the morning to make that happen. That's why a random fellow could tell a young foreigner that communism is a lot of shit.

The boy had his conversation with a bookseller in the Plaza de Armas, a picturesque spot that fills up with some but not all of Havana's many book vendors. Goldberg figures that Cuban society will show signs of thaw when selection at the Plaza improves. Not when the books on sale are no longer battered relics that’ve been handled for decades, because why dream, but when the titles are those that sane people would want to buy. At present, he says, that's not the case: “Censorship laws, and custom, and the secret police, guarantee that the only books sold on the square are mildewed Chomskys and Che hagiographies.” Well, I haven't been to Cuba in 14 years, and perhaps Raul is a harder man than Fidel. But on my visits to the Plaza, I saw quite a variety of beat-up fifth-hand books on sale.

For example, I remember wondering how a copy of Anthony Adverse (in Spanish) had made it across the ages to bake in the sun. A bookseller became miffed because, with his encouragement, I sat down to read some pages of an Isaiah Berlin book, then got up again without buying it. (This is typical of Cubans in the big towns. They open by telling First World visitors that, no, they don't want your money, but avoid a payout and they get mad.) At a narrow cranny of a bookstore not far from the Plaza, I noted a U.S. history text from the 1930s, something with a title like America: Land of Hope and Freedom. The only thing that kept its boosterism from polluting English-savvy Cubans was nature's own safeguard of unreadability.

These are just the titles I remember. My impression is of the same sort of jumble you find at any used bookstore, though with more of a left-wing slant. And matters didn't end there. At the apartment where I stayed in Havana, I saw a U.S. network news show rebroadcast with Spanish subtitles. All that the censors had taken out was the commercials; you'd get the overhead view of the anchor stacking his papers, then you'd come right back to the news. At Santiago de Cuba, two disgruntled ex–English teachers walked with me down a crowded street while a couple of cops patrolled perhaps 10 feet away. The ex-teachers were telling me, an obvious foreigner, everything they disliked about life under Fidel, and they were doing it loudly. I edged an elbow in the cops' direction, and my friends glanced over. “Oh, they don't speak English,” one of them said.

A final note. The apartment where I stayed in Havana was the home of Benny, a vibrant woman who made some dollars by renting space to backpackers. She wasn't supposed to be doing that: if you didn't have a license from the government, you didn't take in foreign lodgers. Supposedly. Her apartment was high up in its building, and anyone who came in or out did so by means of a rickety metal staircase. This crawled along the building's exterior, crawled a long way and in full view of the street. There more cops patrolled, since Havana always had plenty of them on foot. They didn't seem to mind the pale people with backpacks trudging up to Benny's apartment and back down again.

Perhaps “censorship laws, and custom, and the secret police” have freed the Plaza's stalls of Isaiah Berlin and ancient American bestsellers. Maybe not. The laws are on the books, but custom is not on the regime's side. As for the secret police, they do many nasty things, but I saw little sign that they keep the population in fear. What America is to equality, Cuba is to nightmarish total control of all aspects of life: the people in charge know what they're supposed to be doing, but they have trouble getting around to it.