The President is finally showing swagger and confidence. 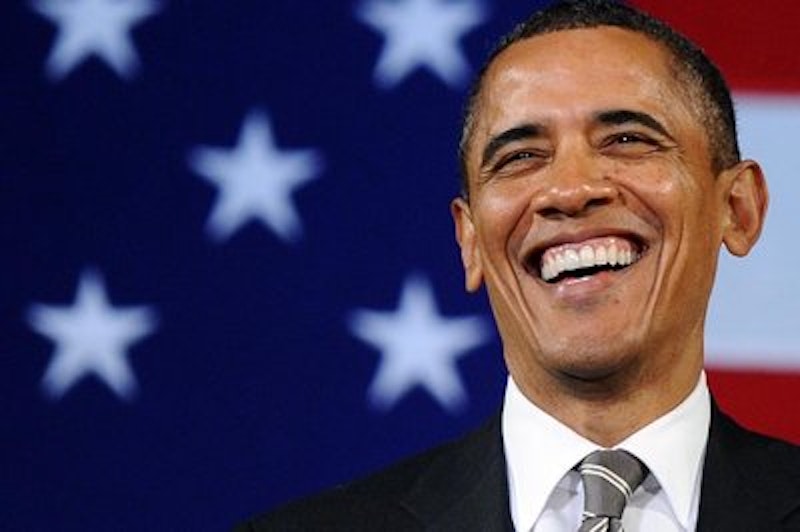 Just a year ago, nobody would have believed that the Dow is hanging out at around 18,000, gas is under $2.50 a gallon, economic growth is sparking at five percent, unemployment is down to 5.8 percent and tax collections are at historic highs. November alone saw 321,000 new jobs added to the economy. And, finally, the nation has a budget that will extend an entire year without fear of shutdown or default. Immigration leniency brings five million shadow figures into the open and on the tax rolls. The codicil is that Obamacare is a roaring success.

And that was only on the home front. Cuba is now open for business for the first time in half a century, across the oceans the Russian economy is staggering (again), the U.S. signed an unprecedented climate agreement with China and North Korea is credited with technical wizardry far beyond its benighted capacity. The threat of Ebola has been contained, more or less, without infecting America and ISIS is on the run despite occasional exhibits of savagery. The Obama administration is accelerating the shutdown of America’s gulag, Guantanamo Bay.

Not bad. Not bad at all for a president and a black president at that—which seems to trouble some people—whose party got clobbered in the November elections and who represents the last Democratic power center standing in Washington. Meet the new Barack Obama, constitutional lawyer, former community organizer and living proof that the designation lame duck can often be prematurely affixed. Where has this guy been all these years? It’s time to give the late-blooming Obama his propers.

Obama has finally got his groove. With year-end successes piling up, Obama’s liberated, free to float above his own party and do God only knows what to the other guys, including hammering them with executive orders and unilateral declarations. Republicans lob back with court challenges (one against Obamacare was just tossed out) and threats to defund programs and thwart appointees even though a president should be allowed to pick whomever he wants to serve in his administration.

Poll findings follow peoples’ pocketbooks. The numbers reflect their personal condition rather than the nation’s. And recent numbers show Obama’s standing at 48 percent, a 20-month high, still slightly in the red zone but nonetheless just a tick shy of the magic 50 percent. People, in general, are feeling better and revealing optimism about the new year.

Obama’s sudden ascendancy correlates to the sharp year-end drop in oil prices. It is estimated that the $1 a gallon decline in the price of gas freed up $63 billion in discretionary money that consumers can spend on other needs or wants. The average motorist buys about 1200 gallons of gas a year and the savings amounts to a tax cut or a pay raise.

The smooth efficiency of the year-end sign-up period for Obamacare is a sharp contrast to the botched and bungled roll-out of the new program a year ago. So far, 6.5 million new members have enrolled and the cost of healthcare is showing a steady and discernable decrease.

Obama’s opening of the door to Cuba and signing the climate control agreement with China are equivalent to Ronald Reagan’s toppling of the Berlin wall and Richard Nixon’s raising the blinds on China. Obama reversed 50 years of failed policy and opened new opportunities for American commerce with Cuba. And he brought to the negotiating table one of the world’s worst polluters. The bonus is that his sanctions against Russia, along with falling gas prices, are ripping apart the Russian economy.

Again, the numbers reflect the results. A range of anywhere from 60 percent to 78 percent of those surveyed—depending on the poll—approve of Obama’s removal of sanctions against Cuba. Even Sen. Marco Rubio (R-FL), a potential candidate for president, has quieted his caterwauling after the one million Cubans in Miami have generally accepted the agreement and will now be able to travel freely to their island homeland.

Despite his recent successes and newly invigorated confidence, Obama enters the new year facing heightened belligerence and an institutional brick wall—a newly emboldened yet ideologically divided House with the largest GOP majority in half a century, a new Republican majority in the Senate and a 5-4 conservative majority Supreme Court.

So when Washington returns to work next year, the biggest challenge Obama will encounter is Congress itself. And it is then that the 2016 campaign for president commences in earnest. Among the very first confrontations will likely be the Keystone Pipeline which Republicans have promised to rush through. And with equal fervor, Obama is determined to have his veto pen ready and waiting.

It has taken Obama six years to reach the level of independence and swagger that he has lately been displaying. Throughout those years, despite his education and intellect—and his celebrated aloofness—Obama often seemed to lack two qualities noteworthy in every successful leader, cunning and cojones.

He was bedeviled by problems with a recalcitrant Congress, even though Democrats controlled both the House and the Senate during his first two years in office. There was pressure from Republicans as well as Democrats who urged the President to avoid policies and programs that would endanger their election chances. They, in turn, slammed the President, even deserted him, and refused to speak out for the very policies for which the party stands. But Democrats lost two mid-term elections anyway. Finally, Obama was released and free to act on his own in his final two years. He’ll never be on a ballot again.

A major continuing and stubborn problem is that of income inequity and the widening gap in the distribution of wealth. Parked money does no one any good. Every signpost indicates continued growth in the next year with business upping its investments and the fed continuing its stimulus into at least 2015. One lesson that was learned with falling gas prices at year’s end is that if people have money they will spend it. And Obama’s poll numbers will continue to improve.