The Pyramid Fell on Trump 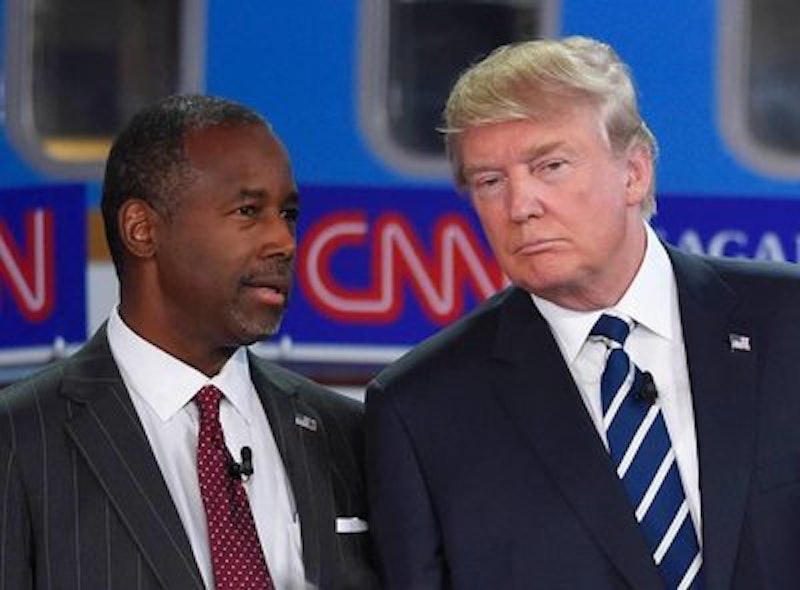 Donald Trump is in trouble. The media has realized that Ben Carson is more fun.

It's slowly dawned on anyone paying attention that beneath Carson's soft-spoken exterior there lurks a goldmine of nattering idiocy and foolishness. But still, who could’ve been prepared for the gleefully random silliness he spouted this week? A reporter asked Carson to reiterate his views on the Egyptian pyramids, and he did. Those views being: the pyramids were not tombs, but were instead hollow storage containers for grain storage, built by the Biblical Joseph.

This is a satisfyingly preposterous opinion, and the nation's media has been busy happily pillorying Carson for it. Which is good news for Carson, and bad news for Trump.

How can it be good for Carson to be revealed as a credulous spouter of pseudoscience? Two reasons. First, Republican primary voters like pseudoscience. Climate change denial and creationism are popular with the GOP base, especially in states stuffed with evangelical voters like Iowa. Mainstream media attacks on Carson for Biblical literalism are hardly going to hurt him, no matter how silly or random that literalism might be.

But more importantly, Carson's comments make good copy—and good copy is what drives polls at the moment. It's still a little early for voters to be paying close attention to the race in most of the country.  That means that polls mostly measure name recognition; voters don't have strong preferences, and so they tell pollsters they're supporting whomever it is they've heard of. This explains how Trump could insult veterans and make crude jokes about Fox News anchor Megyn Kelly, and still go up and up in the rankings. Journalists love it when Trump says mean-spirited, belligerent nonsense. So reporters wrote and wrote and wrote about Trump—then wrote about him some more when all that writing caused his poll numbers to go up.

Enter Ben Carson, being goofy. Carson's pyramid comments are far more improbable than anything Trump’s said. And they open up new, potentially hilarious vistas for snickering journalists. Ask Huckabee and Santorum about Biblical pyramid grain silos, and see if they'll jettison all self-respect in an effort to pander to Carson fans. Or just ask Carson about any random thing. Mr. Carson, how did the dinosaurs die?

Carson's already neck and neck with Trump in national polls. A media feeding frenzy is only going to help him—and that's very bad news for Trump. Trump coverage was a feedback loop; report on something outrageous, watch polls go up; report on how Trump can say any outrageous thing and have polls go up, repeat. As long as Trump looked like a winner, he could ride the press coverage to greater polling heights.

But now that the press has discovered the joy of Carson, that’s probably all over. A Trump who looks like he's not an inevitable winner is a Trump that’s less interesting to the press, and therefore a lot weaker in the polls. The spiral that sent Trump's numbers into the stratosphere could spiral him right back down.

It's probably all just a distraction in the end. Neither Trump nor Carson ever had a real chance of getting the nomination—though it's possible that either could win Iowa. But in the meantime, it's a grim time for Trump. If he doesn't want to be rendered irrelevant, maybe he needs to start talking about pyramids.