Look to Maryland as an example. 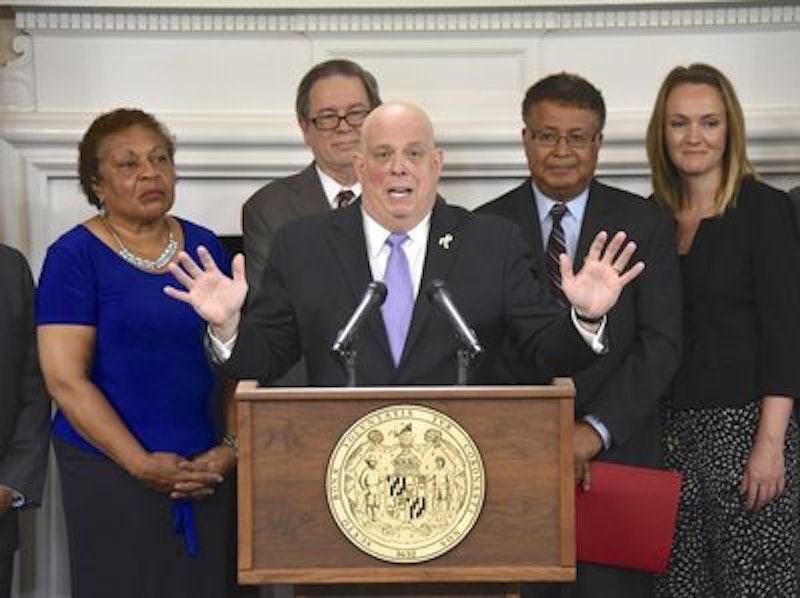 Maryland’s Republican Gov. Larry Hogan wants to take politics out of politics. He’s trying to turn over the congressional and legislative redistricting process to a panel that includes appointees that shun politics and political parties. Attempting to fulfill another of his campaign promises raises the question of whether he’s serious or simply playing for headlines to satisfy his pledge.

So far, the overwhelmingly Democratic General Assembly isn’t buying it, the public is happy with Maryland’s districts as they are presently configured and even the U.S. Supreme Court and many lower federal courts have been unable to resolve the arcane jig-saw of partisan gerrymandering that both major parties treat as the spoils of electoral victory. Besides, Hogan’s asking politicians to surrender what power they have over the redistricting process, which is audacious in a state that’s more than two-one Democratic.

The partisan map-making is about to get even worse. Republicans last week added another governorship to their ranks, bringing their total to 33, with absolute control of 25 state Houses—both the governorships and the legislatures. Through their dominance of state houses and redistricting, they’ve been able to assume a majority in Congress and thus contribute mightily to deadlocked government as well as the gusher of money that fertilizes the nation’s political system.

Hogan’s proposal is reminiscent of an earlier Republican-inspired reform idea, term limits, that was supposed to end the iron grip of incumbency. But when those candidates who took the term-limits pledge won and went to Washington, most of them decided they liked their jobs and stayed, ending brief romance with reform.

Redistricting is little more than legalized bodysnatching. The practice occurs every 10 years in the year following the decennial census, next in 2021. Redistricting, and its companion, legislative reapportionment, has devolved into an inbred process whereby incumbent members of Congress and state legislators pick the constituents they want instead voters selecting their representatives of choice.

The practice of gerrymandering was challenged before the Supreme Court last week by a Montgomery County (Maryland) resident, not on the issue itself but on a very narrow technical argument that a single judge instead of the customary three-judge panel dismissed an earlier challenge. The case was another attempt to get redistricting before the court. The justices were skeptical that there is a legal solution to the political problem.

The court’s original “one man, one vote” ruling in 1964 dealt with equalizing votes and left much of the implementation to state legislatures with little prescriptive help to carry out the mandate except improvisation. In Maryland’s case, for example, the “one man, one vote” directive meant eliminating the old “unit rule” under which a single under populated Eastern Shore county had the same legislative weight as the entire city of Baltimore. Before the “one man, one vote” ruling, the 11 Eastern Shore Counties controlled half the votes in the General Assembly, based on the number of counties and not population.

In fact, in the 1962 corollary, when Maryland was awarded an eighth congressional seat, lawmakers were so perplexed that they couldn’t figure out how to accommodate the additional representative—from seven to eight members of Congress—to meet the state’s growth in population. So to delay a decision on redrawing the state’s Congressional map they created the extra-ordinary office of congressman at-large who ran statewide—Carlton R. Sickles—and who, in effect, had the same constituency as the state’s two U.S. senators but with far less power. That broad exposure gave Sickles a base from which to run for governor in 1966.

Redistricting is a high-stakes turf battle. A squiggle on the map here, or the shift of a single precinct or neighborhood there, can mean survival or defeat for a candidate and even end long-term careers. When the General Assembly first attempted to redraw congressional boundaries in 1966, the tension nearly erupted into a fist-fight on the Senate floor when the Dorchester County senator, Frederick R. Malkus (D) made what were regarded as anti-Semitic remarks about Baltimore during debate.

So the only guideline for Congressional redistricting that had been established by the court was population: Each of the nation’s 435 Congressional districts must have approximately the same population, currently about 625,000 bodies per district. In the 10-year redistricting roundelay, some states gain representation and others lose.

Racial considerations, which contribute significantly to gerrymandering, were added later to assure that minorities have adequate representation in proportion to their population. Race gave birth to another sleight-of-hand in the redistricting process, a quiet connivance between blacks and whites to bleach some districts in order to blacken others. In Maryland, for example, when the current Congressional districts were adopted, Rep. Donna Edwards (D) filed a lawsuit arguing that her Prince George’s County Fourth District wasn’t black enough. Maryland has two predominately black districts, the Fourth and the Seventh (Rep. Elijah Cummings.)

Maryland now has eight members of Congress—seven Democrats and one Republican. The current format was designed with the specific intention of eliminating one of two Republican seats, that of former Rep. Roscoe Bartlett of Western Maryland, who now lives in West Virginia. The current plan, drawn in 2011 while Democrat Martin O’Malley was governor, has been upheld by the courts three times and approved by the voters on referendum. Those twin actions do not support Hogan’s statement that Maryland voters are clamoring for reform.

A major consideration for redistricting Maryland is the state’s configuration. It has no simple geometrical form. Thus, the First District runs from Cockeysville, in Baltimore County, across the Chesapeake Bay to the lower Eastern Shore. The much-maligned Third District resembles a runaway inkblot, meanders through Baltimore City and several counties. Another is the redistricting concept itself: It’s like a balloon; squeeze one part and another part pops out.

Legislative reapportionment, by contrast, considers contiguity and commonality of interests as well as population. It, too, has given birth to the so-called “metropolitan” districts wherein city districts cross county lines to balance representation. The formula that was eventually settled on remains intact—one senator and three delegates for each of the state’s 47 legislative districts, for a total of 188.

Comes now Hogan, who wants to purify the process by creating a panel of three Democrats, three Republicans and three independents, the assumption being that independents would be those who register in Maryland as “declines.” Declines are those voters who reject both political parties for reasons only they know.

Maryland is a “closed” state and independents are prohibited from participating in primary elections. So it is fair to ask, why would any governor who’s serious about sanitizing the political process invite anyone to participate who so disdains politics and political parties that they surrender their right to vote?

The Hogan-appointed commission that proposed the revisions stated, “These reforms would put Maryland in the front ranks of redistricting reform…” However, a case can be made in which Maryland might want to be last, not first, to plunge ahead of the pack. Hogan, if he were to choose, could prove his statesmanship by convincing a majority of his fellow Republican governors to join him in a unified campaign to overhaul the redistricting process instead of putting Maryland at risk of being outflanked in Congress and possibly lose billions in federal funding.

Seven other states—Alaska, California, Idaho, Montana, New York and Washington State—have created panels to revise the redistricting process. California was the first state to hold elections in districts created by an independent panel and the test-run was a disaster.

“You can’t take politics out of redistricting,” says Del. Samuel I. Sandy Rosenberg, a ranking Democrat from Baltimore who’ll help hold sway over Hogan’s proposal. “At the same time we do whatever we must to meet the smell test. If other states offer to do something along with us, then I’m fine.”