From the Mouths of Bebes 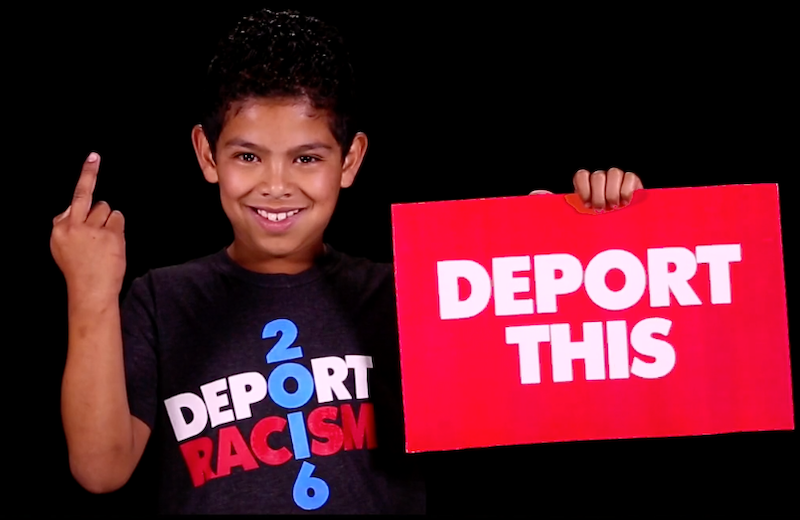 It appears the website of a group that posted a video of kids swearing about Donald Trump originally contained links to a pro-Hillary Clinton site but now directs people to Bernie Sanders information (pundit Gavin McInnes noted that a right-wing computer programmer figured this out).

Perhaps the foul-mouthed kids were originally intended to boost Clinton’s campaign and the programmers later decided they liked Sanders even more. Perhaps the programmers simply worked on various sites and hastily copied the code from one to another with no deliberate ideological implications (aside from a pattern of doing work for the left). A few online commenters floated the more conspiratorial theory that pro-Clinton people realized the video is offensive and wanted Sanders to get the blame for it.

I think that’s giving the left far too much credit, though. The stick-it-to-Sanders theory would imply that people on the left are still capable of discerning what’s offensive and what isn’t. Instead, their answer to the question “What’s offensive?” nowadays has almost nothing to do with traditional goals such as protecting the delicate sensibilities of kids and instead has become a sort of quantum-superimposition of an apathetic “Nothing is, really” and a shrieking “Everything is! Everything!”

But the idea that the left would see it as offensive, even corrupting, to encourage kids to swear in the service of partisan politics seems unlikely. Politics, especially directed against an ostensible racist like Trump, is a holy, purifying fire in the minds of contemporary leftists, and the faster kids can be baptized in that fire, the better for us all. (If they can be taught about transgender lifestyles once they’re safely back in their classrooms, so much the better. So many children, so much progress to make happen!)

But this much I’ll say for the crazies on the right who bring the kids along: my unscientific survey of the right’s deployment of kids suggests that the wee conservatives are rarely encouraged to misbehave (as by swearing), even if we might not all agree about the righteousness of the causes for which they are being deployed. That is, conservatives might be a bit too quick to think it’s cute when child-soldiers take up righteous banners—but they aren’t too quick to get perverse jollies from kids being duped into behaving badly. That’s more of a leftist thing, a slightly unsettling one.

More creepily, the left is more prone to pretend the kids are wholly autonomous, reaching left-wing conclusions through pure, innate reason—a disservice to all the decades of learning, moral and otherwise, that civilization normally bestows upon us, as any decent conservative could tell you.

It’s one thing to stick a Statue of Liberty hat on your kid and show him off for cameras. It’s far more sinister to stick him on-camera at age four saying he thought over the current situation all on his own and concluded that we need to adopt a parliamentary legislative system and pass the Equal Rights Amendment. Using your kid as a prop is bad enough without turning him into a living lie.