A crack shows in each constituency. 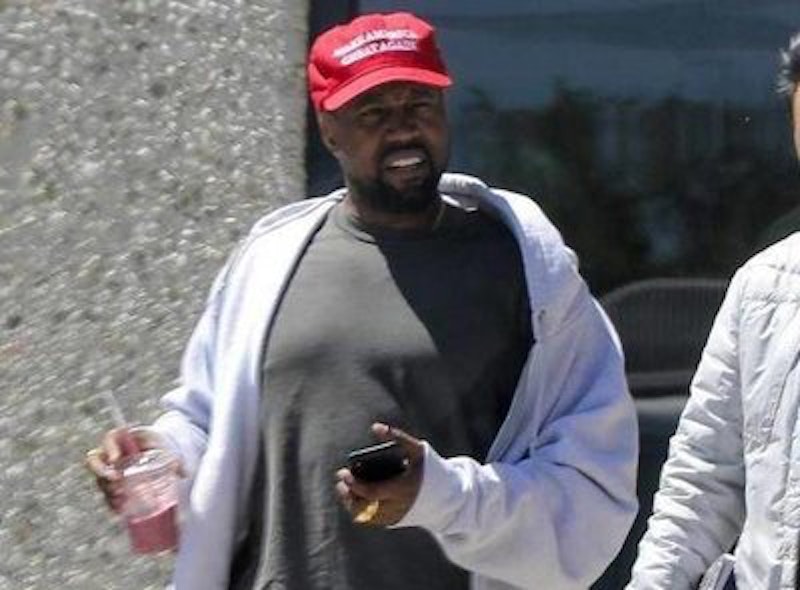 Liberals are more comfortable than conservatives thinking of themselves as a broad coalition without a single unifying philosophy. The key to maintaining liberalism’s control over reality is to wield all of its subsidiary constituencies simultaneously, like the six magical Infinity Stones being gathered together in the movie Infinity War.

April was a bad month for liberals, then, since it delivered big pop-cultural reminders that they do not fully control six of their favorite interest groups: blacks, gays, musicians, the working class, comedy fans, and filmmakers.

Democrats’ most reliable voting bloc, blacks, surely noticed Kanye West reaching out to Trump, donning an autographed MAGA hat, and even rushing out a thoughtful, conflicted rap about the whole thing, “Ye vs. the People.” Tellingly, the rap claims poor Kanye hid his MAGA hat in the closet for a year before he summoned the courage to wear it in public. True, West has produced tweets and interview comments that place him all over the map politically, probably because he doesn’t really care about mainstream politics, but then again, if some people think the meandering Trump “plays fourth-dimensional chess” with political strategy, maybe Kanye “plays fourth-dimensional keyboards.” Kanye framed his own Trumpward move in broad terms of opening up black people’s minds to unexpected new political possibilities—the last idea rigid party organizers want to hear.

Morrissey, understandably alarmed as a gay man by the way liberals keep trying to gloss over Islamic anti-gay violence (especially back in Europe), has started to complain about the taboos of political correctness so ardently that he’s going to start developing a conservative following. Like more than a few artistic gay men, he’s always had a bit of a “build your own new version of the aristocracy” classy/snooty vibe, which never sits easily with the left’s egalitarianism. I’m reminded once more that the lesbian writer Radclyffe Hall initially favored the Tories and an aristocratic air rather than Labour, but of course the stupid Tories tried to have her writings banned and soon lost the chance for a conservative-gay alliance—at least until lately.  A Morrissey here, a Milo there, memories of the Pulse nightclub massacre all around, and soon enough you’ve got another not-quite-leftist bloc.

Losing either a Kanye or a Morrissey is a double-whammy for liberalism, though, since liberalism is supposed to have a lock on musicians as well, or at least the ones who aren’t religious country singers. I may yet live to see my teenage dream of punks enthusing about federal budget cuts (though Morrissey would likely still rather see Tories guillotined than see cows eaten).

Roseanne may have dipped in the ratings since her season premiere, but there’s no question she caused a seismic ripple with the idea that a likable, funny, working-class family might plausibly prefer Trump to the establishment. They could quote Karl Marx approvingly for the rest of the season on that show and some damage to the left will nonetheless have been irrevocably done.

Comedy fans have looked leftward for at least a couple decades now, despite the online world of memes (much like the libertarian show South Park) sometimes veering rightward out of sheer irreverence and weariness with left-wing as well as right-wing taboos. I wouldn’t presume to tell any comedian to rein it in for the sake of avoiding offending people—that goes with the territory in comedy, and I think artists of all stripes should be given a pretty wide berth. Still, the negative reaction to Michelle Wolf’s extra-mean White House Correspondents Dinner speech is bound to remind comedians that leaning ever farther left is no guarantee of keeping crowds supportive and pacified. I’d prefer everyone chill out, but failing that, it may be healthy to remind comedians that campus Marxists are not the only audience out there, thank goodness.

But those comedians who are committed to the left-wing cause, like Samantha Bee (who mocked economist Peter Schiff’s developmentally-disabled relative and got an audience to laugh out loud at the law of supply and demand) or that skinny, weird, condescending Comedy Central host who recently badgered Alex Jones on the street with the “joke” accusation of being a “crisis actor,” should at least worry that they’re beginning to sound more strident than funny. Indeed, a couple decades of The Daily Show teaching people to laugh harder at political foes than at jokes per se probably helps explain why we now have the alt-right making memes.

But surely liberalism still has Hollywood on its side, right (aside from all the guns, ogled female bodies, money, militarism, etc.)? Well, to return to the source of our original metaphor, the movie Infinity War, I’m not so sure. Without committing any further spoilers, the villain Thanos is clearly a sort of environmentalist Malthusian, wanting to end population growth the harsh way. With billions of dollars at stake, Marvel Studios dared to risk pissing a lot of people off by making the villain a green (although he’s literally purple). Audience members may be left thinking about the fact that defining a “correct” population level for the whole universe is actually not that much more megalomaniacal than decreeing one for the planet Earth (or for that matter a precise “global average temperature”). Judging by the box office returns, people aren’t any more upset by this anti-Malthusian premise than they were by Black Panther dabbling in cultural appropriation. Hollywood, take note.

As I think Kanye is well aware, one need not turn to Trump or the Republican Party to become an open-minded person, either. Better to stay unpredictable, in fact. The two major parties are largely hollow shells when it comes to philosophy anyway, thus easily commandeered by strong, driven personalities such as Trump or Clinton. But the left’s problems are even deeper than the shaky state of the Democratic Party. It’s not just a matter of losing voter blocs. The delusional left has long been at war with reality—misrepresenting history, science, art, psychology, politics, and especially economics—and on all of those fronts, reality may be starting to reboot itself.