The Prospect of Trump vs. Sanders Makes Me Gag 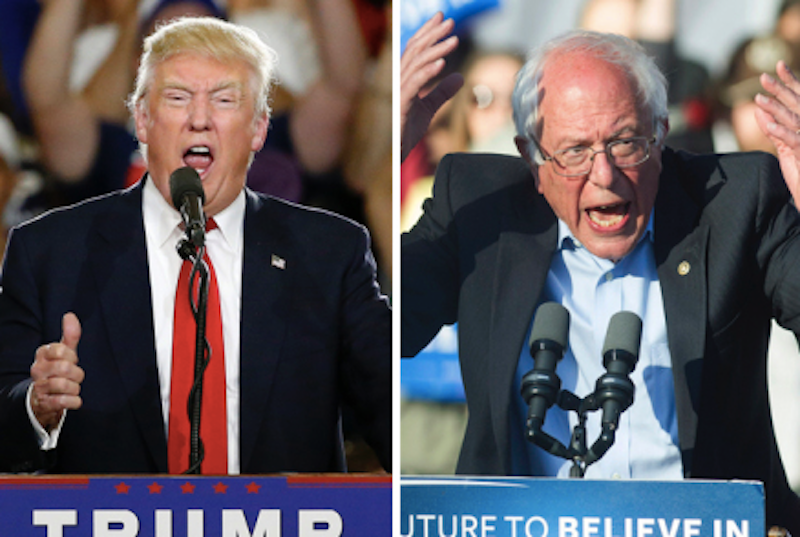 Like a lot of people I know, I've taken to saying that (almost) anything, (almost) anyone is better than Donald Trump. In 2016 I voted in Pennsylvania, and wrote in Maya Lin for president, because I despised both of the major-party candidates. When Trump won Pennsylvania by about 40,000 votes out of six million cast, I found myself regretting, just a little bit, that I hadn't voted for Clinton. Even having the sentence “I should have voted for Hillary” float across my consciousness feels like a self-betrayal. But it's harder to avoid all the time, as Trump abuses presidential power to an ever-more devastating extent. I think Trump’s a racist, a demagogue, and, as Michael Bloomberg puts it, a "carnival-barking clown." I'm no Democrat (in fact right now I'm a registered Republican), but I can picture walking into the booth this year and voting for Buttigieg, Klobuchar, or even Warren, just because I think stopping Trump is urgent. But if the Democratic nominee is Bernie Sanders, I might write someone in again, or vote third party, or not vote.

Trump vs. Sanders: a lot of people, especially a lot of people who write opinion or talk on television, aren’t too happy with this prospect, because they think Sanders is peculiarly likely to lose. Perhaps they even agree overall with Sanders' ambitious programs for free higher education, universal free healthcare, and so on, but they don't think he could get it through Congress, even if he were elected. I also want to be rid of Trump. But more than electability, I'm worried about what I see as the authoritarianism on both sides of the political spectrum just now. Anyone with any skepticism about the legitimacy and the efficacy of state power is politically homeless.

What I think of as "us," the anti-authoritarians, are liable to be left with a choice this year between a big-state left and a big-state right. Small-government conservatives and libertarians have disappeared; even mainstream deficit hawks such as Paul Ryan burning away like a morning mist. Rand Paul has become a Trump advisor and enthusiast, for God's sake.

And if there’s an anti-authoritarian left, it’s in hiding somewhere from the censors and the old-style socialists. I might be a "libertarian leftist"; for example, I consider myself a feminist and an anti-racist, and I've worked hard to understand and be those things. But I’m skeptical of state power as the mechanism of cultural transformation, and don't think we’ll liberate ourselves or one another by more thorough oppression. In the amazing polarization of now, a lot of libertarians will end up voting for Trump, and if there are any left-wing anti-authoritarians, they’ll end up voting for Sanders. Either way, they'll be betraying their own principles.

This is not the first such moment. The Bush/Cheney administration's "compassionate conservatism" turned out merely to mean big-government conservatism, and the George W. administration re-invented America as a modern surveillance/security state with ballooning deficits and a permanent state of war. Since then, the national debt has grown to around $23 trillion. In 2004, John Kerry wasn't exactly talking about dismantling the military-industrial complex, or even ending the Iraq war. There was really no place for libertarians of any stripe to go in 2004, and no place for a peacenik. The Libertarian Party nominated a gun nut that year.

This year is somewhat different and the problem’s even more acute. The kind of socialist that Sanders is makes me bristle; I think he's essentially an unreconstructed mid-20th-century Marxist. He hasn't even caught up with the leftist identity politics of now; he's stuck in the class politics of 1848 or the 1920s. He portrays the basic fact of American politics as a class war between plutocrats and proletarians. At one of the debates, he said, “The issue is where power resides in America, and it’s not white or black or male or female. We are living in a nation increasingly becoming an oligarchy." It's not that he doesn't have a point about oligarchy; it's that he's got a mechanically Marxist understanding of social reality: only class is a real vector or power. That was always false.

It raises my hackles. I've been dealing with the Marxist and quasi-Marxist authoritarian left since I was a kid: my parents' politics were in this vein (my mother was raised by Communist Party members). I always thought the analysis was reductive; more to the point, the solutions recommended or presupposed the need for state power of unprecedented scope. People of a Marxist bent appeared not fully aware that they were totalitarians-for-human-liberation, though the whole century in much of the world (in the Soviet Union, China, North Korea, and so on) showed the actual results of what they were attempting to achieve.

I'm comforted slightly by the "Democratic" that Sanders tacks on to his socialism, and it may be that it would end us up in a fairly mellow or Scandinavian sort of place. But it would increase the dependence of each of us on the state to a dramatic degree for every aspect of our well-being. It would expand the state bureaucracy quickly and dramatically. It would have the government absorbing ever-greater chunks of the economy. Then all this power and control of populations from cradle to grave would be liable to fall into the hands of the leaders of a reactionary backlash, as Trump followed on Obama and kept the government expansion going, or increased it.

I still might think that electing Sanders would be worth it if it ends Trump. But if I vote for Sanders, I'll feel a real sense of resentment toward the political culture of now, which will have ended me up stuck between rival authoritarianisms, forcing me into a deep self-betrayal. I might vote for Sanders, or knowing me, when I'm staring at the choice on the morning of November 3, I might not be able to vote at all.

Not that it matters to you how I vote. But I wouldn't be alone in believing that a choice between Trump and Sanders is unacceptable and trying, one way or another, to avoid making it.