You find yourself neither here nor there, in a suspended animation of war and peace. 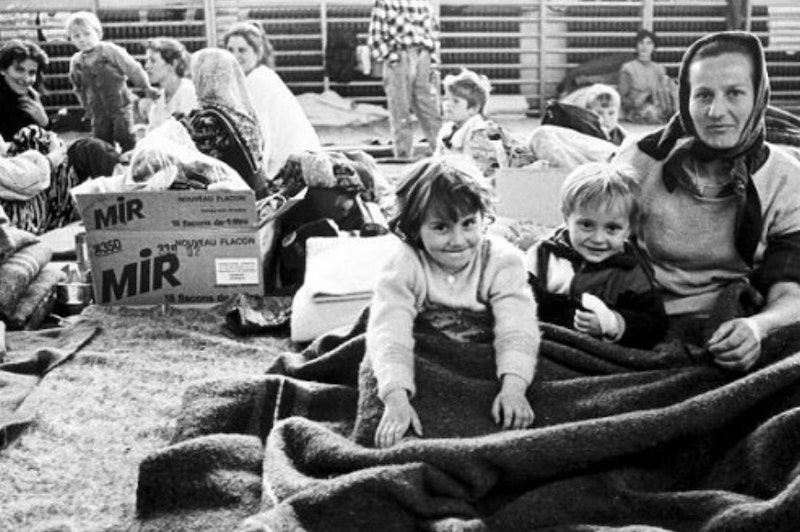 Last week, I wrote a review of Jessica Stern’s new book, My War Criminal: Personal Encounters with an Architect of Genocide, which was published in Spectator. The writing resembled a marathon, only in this case, it was seemingly intellectual. I read the book in two days, and I wrote the review in two hours. At first, I felt a surge of adrenaline, and there was hardly any exhaustion. But just like any aggressive physical exercise, the rush eventually wore off and the pain ensued.

As a survivor of the Bosnian war, and losing many family members as a result of genocide against Bosnian Muslims, Stern’s book inevitably had an effect on me, as it did on many of my fellow Bosnians. It wasn’t exactly the content of Stern’s book that made me exhausted. Rather, it induced anger. The book was filled with lies and mythologies of Serb Chetnik superiority over Bosnian Muslims (or Turks, as we were called during the war), and the “rational” ideas why we had to be exterminated in order for the mighty kingdom of the Greater Serbia to live on.

The book’s thrust and the mission for Stern was to get “inside” the war criminal, Radovan Karadžić, and somehow become him. She did, and in the process, Stern participated in the continuation of a false narrative, and yet another denial of genocide of Bosnian Muslim during the 1990s Yugoslav war.

The dust has settled a bit and Stern isn’t really in the news, or at least not in my Twitter feed. But now what? I’m always amazed, in our current media iteration, at how quickly something disappears from the endless stream of news feed, despite the fact that it poses an incredibly significant emotional and philosophical problem. Ultimately, this isn’t even about Stern or this immoral book. Rather, her endeavor (if we may even call it that) points to a question of choosing between aesthetics and ethics.

Throughout the book, Stern chose the ideology of the aesthetic over the clarity of morality. She chose bad Serbian epic poetry, she chose Karadžić’s hair and his “healing” powers, and ultimately, chose to ignore the voices of those who perished as well as the audible voices of the survivors. The perverse objectivity she put on display only further cemented her inability to move beyond ideological simulacra and into the world of reality.

But even this necessary analysis and intellectualizing of Stern’s action must stop at a certain point because it leads us away from the interiority of war experience. At the heart of interiority particular only to war and genocide is memory. After I wrote the review of Stern’s book, and especially after many conversations with my fellow Bosnians—especially with Bosnian-American writer, Aleksandar Hemon, on the wounds and complexity of memory and mourning—my own familiar and unfamiliar memories arrested me in the midst of daily tasks.

This was a kind of epiphany, and that part of me, which inevitably lay dormant, awoke. The mix of realist and surrealist images, all blending into one became apparent quickly, and there was no other choice than to follow the path of memory. Foolishly, I thought that I’ve resolved something—once and for all—and that I’ll be able to open the doors to the rooms of my mind. But that’s a beautiful dream. Perhaps it’s the philosopher and intellectual in me that seeks rational and truthful answers to the problem (in this case, the problem of memory and evil) but I realize now that memory completely resists logic and intellectual analysis.

Russian-American poet Joseph Brodsky wrote, “Memory… is a substitute for the tail that we lost for good in the happy process of evolution. It directs our movements, including migration. Apart from that there is something clearly atavistic in the very process of recollection, if only because such a process never is linear. Also, the more one remembers, the closer perhaps one is to dying. If this is so, it is a good thing when your memory stumbles.”

My desire to see everything immediately is somewhat noble, but this interior impatience only results in the loss of words. As Brodsky wrote, “Attempting to recall the past is like trying to grasp the meaning of existence.” The paper on which I write either remains blank or is composed to disjointed thoughts that more often than not lead into the doors without knobs, or once opened, they have a solid brick wall. Or on the other hand, I feel like Special Agent Dale Cooper of Twin Peaks, stuck in a dream of brief messages and whispers from familiar figures and strangers alike. But even these surrealist flashes, in their disjointedness and seeming confusion are messages from another dimension of self that is part of collective memory. It's this memory that unites me to Bosnia and war, which must be listened to in whatever language or a series of images it arrives.

The loss of words always leads to melancholy—Bosnian melancholy—that’s both tragic and comedic but mostly inescapable. The lines between tragedy and comedy in the Bosnian heart and mind are blurry. Brodsky wrote, “A writer’s biography is in his twists of language.” I live between two languages at least—Bosnian and English, and even Czech given the fact that I lived in a refugee camp in the Czech republic. To live inside many languages is to live inside many regions of being that often pull on you, and more often than not, you find yourself neither here nor there, in a suspended animation of war and peace.

I don’t anticipate any philosophical resolutions because even philosophy creates more questions than answers. How can I then expect the mysteries of human heart to reach a conclusion that will give birth to clarity? No, such a thing will not occur. The images will keep unfolding and my responsibility is to not ignore them.