It's the left, not the right, that doesn't like free speech. 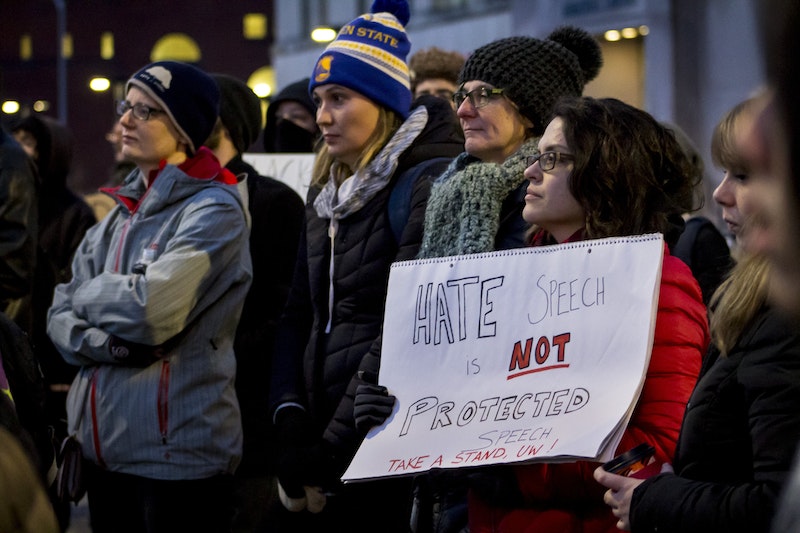 Free speech advocates have expressed concern that the political left is actively trying to silence opposing opinions. The outcry is reignited every time conservative speakers like Milo Yiannopoulos, Ann Coulter, and Ben Shapiro find it difficult, or impossible, to speak on a university campus. In an op-ed that ran in The New York Times, Keeanga-Yamahtta Taylor tries to make the argument that the right-wing media and conservatives are equally to blame when it comes to the stifling of expression.

Taylor, a professor at Princeton University's Center for African American Studies, has first-hand experience in having her voice quashed. She triggered Fox News with a commencement speech at Hampshire College last May when she excoriated President Trump as a “racist, sexist megalomaniac.” While it's hard to make a case that she was wrong, the right wing, Trump-apologist cable network flipped its top and stoked its malleable adherents into a frenzy. After receiving 50 violent, threatening emails, the professor decided to cancel speaking engagements in Seattle and San Diego. That she was abused like this is a disturbing commentary on the times we live in, but that doesn't mean she has much of a point with her Times article.

“The right-wing media,” Taylor writes, “seems only to care about protecting free speech it likes.” While it's true that each side cares more about its own speech, her situation with Fox and the hateful emails was not really a question of free speech. Nobody in Seattle or San Diego deprived Taylor of her right to express herself publicly. Taylor wasn't de-platformed, and couldn’t form a coherent argument that the right uses de-platforming as a silencing tactic as the left has for years now. Certainly her right-wing counterparts like Coulter are abused on the Internet, yet they continue to speak publicly. In the current angry era of extreme polarization, people addressing certain hot button issues in outspoken ways are just going to have to decide whether or not they're willing to let themselves be intimidated by these anonymous threats that never seem be more than the empty, angry words of a pathetic keyboard warrior who needs to feel he or she has some power.

“When progressives make provocative statements,” writes Taylor, “conservative pundits react with wounded outrage.” Perhaps she hasn't seen how liberal pundits react when they get their buttons pushed. It’d be harder to find a better phrase to characterize the atmosphere at MSNBC than “wounded outrage” over the Trump phenomenon, but that doesn't add up to suppression of free speech.

Taylor is concerned that “conservatives” aren't vocal enough when vulnerable groups like people of color and gays are intimidated into silence. “They're suspiciously quiet,” she writes, “or they drive further intimidation with wildly negative news coverage.” It's not clear how she would have had conservatives react when she allowed herself to be intimidated into silence. There's so many abusive, threatening emails sent from the outer edges of both the left and right that people have become numb to it.

In an essay that's supposedly an argument that conservatives are indolent on the protection of free speech, the author cites little supporting evidence. On the liberal side, which often presents itself as “illiberal” these days, there’s plenty of substantiation that they're not so keen on insisting that opposing voices be heard. In fact, they're often actively trying to shut them down. In April, Howard Dean, former governor of Vermont and one-time DNC chair, said that “hate speech is not protected by the First Amendment.” He was referring specifically to Coulter's speech that UC Berkeley threatened to cancel. Dean apparently hasn't read the U.S. Constitution lately, as it contains no mention of “hate speech.” He probably doesn't know there’s a connection between talking about banning hate speech and leftist calls to punch “Nazis” in the streets. When it becomes illegal to say certain things, people will administer their own form of justice to the many they’ve determined are Nazis.

There’s no conservative counterpart to Dean—nobody of his stature on the right who's talking about banning liberal provocateurs from college campuses or legal concepts that don't actually exist. Besides her own experience, Taylor cites only three cases as evidence of her assertion: a Trinity College professor who was briefly suspended for sharing a text advocating that black people let white people die if they're in the position to save them, a Texas A&M professor who discussed when it's appropriate for black people to kill whites and was denounced by the university’s president, and an Essex County College professor who was fired after she appeared with Tucker Carlson on Fox and defended black-only public events.

This isn't very convincing. Conservative professors, and even the left-leaning ones who stray from the campus left’s narrow ideology, are afraid to reveal their views in an intolerant work environment. If they were to speak of killing blacks or letting them die they'd be fired immediately. Taylor and her fellow academics on the left, on the other hand, can say just about anything they want. The left is the side that discarded belief in diversity of opinion in order to worship diversity of identity.