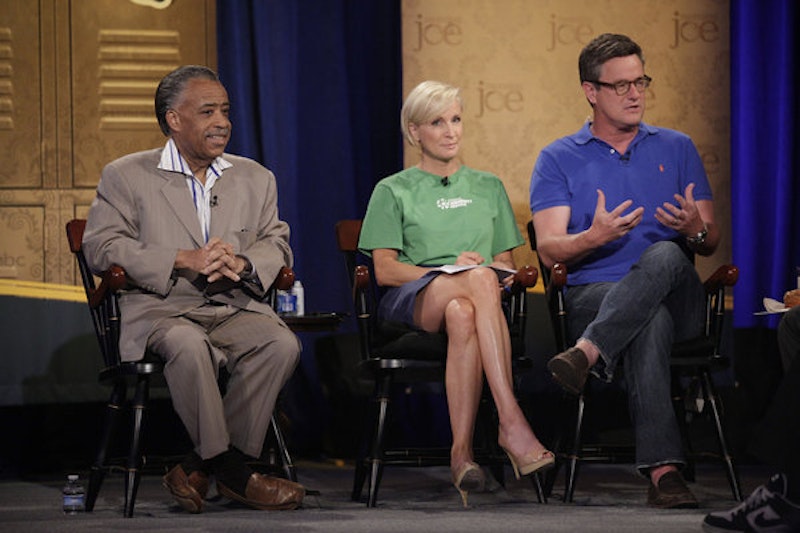 The Reverend Al Sharpton is sitting at the table on Morning Joe, going back and forth with a panel member. The questioner wants Sharpton to say Trump is racist. But Sharpton refuses. Later in the proceedings, he lets fall the reason why: “I’ve had more white moderate ministers calling me now saying ‘I’m marching with you.’ Which is why I don’t want to get into name-calling and give them a way out.” By “them,” he meant the Trump team. He said it could complain about an insult and thereby get out of making any changes. If I might expand the Reverend’s point: white Americans get nervous when somebody black jumps on a person about being racist. Right now Sharpton wants the country as a whole—that is, whites along with the blacks and everyone else—to recognize that the current White House occupant is in bed with racists. To accomplish a perceptual shift this big, one proceeds obliquely. The President is a proponent of racism, the Reverend says.

The panelist he wrangled with was dissatisfied. “Reverend, but you’re even dancing around it,” he said. “We’ve done this for years, where—‘He plays to it’ versus saying ‘He is.’ Don’t you now need to come out”—this is with a good deal of index finger display—“and not just ‘He plays to it’ but—” At this point Reverend Al began saying, loudly, “Well, not only am I—” and “No, not, I, I, I.” The panelist finished off, “He’s a racist. Can you say he’s a racist?” Normally the fellow’s demand is found on liberal Twitter. It’s tacked to “fucking” and “you know” (as in “Just say racism is, you know, fucking racism”) and then lobbed at media outlets like Morning Joe. But here’s a Morning Joe suspect, a white old fellow used to expense accounts (his name is Donny Deutsch, and he has an imperial grill of hair, glasses like black scaffolding, and the air of somebody known by head waiters), and the issue he’s using for his news tussle is why can’t the other fellow say racist. Eventually the fellow tells him: those white ministers. I don’t remember if anybody noticed. Sharpton got the fellow’s name wrong and called him Danny, and that became the session’s wind-up topic.

There were five whites on the show, these being the panel and one of the guests, and there were two blacks, these being Sharpton and a Republican ex–Hill staffer who had written a book (E Pluribus One, with red, white and, blue on the cover and a complete absence of green, black, and brown). Like the white guest, she wasn’t at the table. Instead she was in a rectangle. Pearl choker, pink blouse, bangs, woodwork in the background with little statues of monuments and the Capitol: her rectangle has a Republican air. But her voice has an MSNBC feel; voices that are off-model for cable (Chris Hayes’ constipated but explosive squawk, with its gleaming nasal highlights) often take up airtime on this particular channel. The Republican woman’s voice is trapped in little girlness and has a crimped, flustered up-and-down rhythm. She sounds like she must get her words across the finish line before Little Me is overwhelmed. Reverend Al, of course, has a voice like a bass drum and a seal bark. The regulars have nothing special for voices. (Both Morning Joe and Mika are out today, so their baying and yipping isn’t unleashed.)

The fellow leading the panel (he’s too brisk to give his name) looks like a pictogram. It’s like God said, “I want the idea ‘White Guy,’” and then said, “Okay, got it.” The panel leader could hold a contest in brown-haired stumpiness with Colin Jost, the Weekend Update guy. They didn’t get lips or eyebrows, so God issued them desks and narrow ties. Take those away and there’d be nothing for the eye to take in, just trace elements hanging in air. I bet the mystery brown-haired man can’t raise his voice, and I bet he’s good at doing forms. White guy. But this is reductive, of course.