The things you hear on Canadian radio. 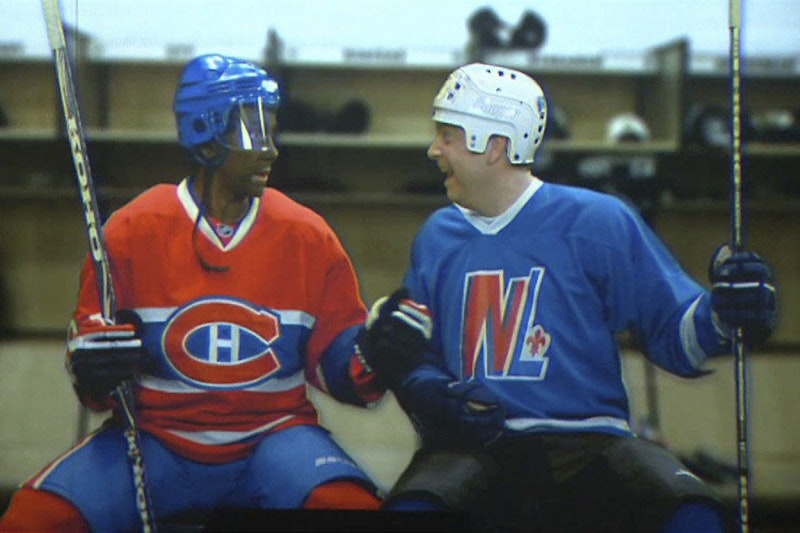 A professor was being interviewed on the radio, and she was upset because a theater company is doing a show with a white actor who's playing a black man. The actor has blacked up his face for the part (a famous hockey player), and the professor said this was the same as blackface in the minstrel shows. You just have to know history, the professor said. Blackface started with ex-slaveholders: those were the people in the audience. Back when Mr. Bones and Mr. Interlocutor puffed out their lips, white men capering about with their faces blacked up, that's who they were doing it for. People who really wished they had slaves again.

Therefore the French Canadian actor (playing the hockey player) should not use black makeup, the professor said. Blacking up is something whites do to make fun of blacks, she said. It is always that, automatically. She noted the exceptions of Bamboozled and Tropic Thunder, because their point is that the whites are idiots for thinking they can play blacks. She could see the joke there.

Listening to her, I decided the professor was somebody who's fairly upbeat. Put upon at the moment, because she was recounting a grievance, but in general of high energy. Active. Chirpy. The people who knew her probably liked her, except for a few who decided she was just too wrong-headed. On the radio, with a friendly interviewer, her wrong-headedness was all dumped in one place, on display. Her thoughts were small and she lived down to them. She rendered simple ideas—Canadians like to think it's just the Americans who are racist; French speakers mistreated the Indians, just like the English speakers did—into gawky, stilt-legged, blind-eyed imitations of sociology. She talked in snap-together cult critic lingo: a lot of “problematic” and “discourse.” And she took for granted mean things about the other side.

For example, she assumed that the black actors who disagreed with her were just sucking up for work. Whereas you or I might ask if maybe the actors had their own views about performance, given that they're actors and not professors. The professor also assumed that the theater company's director was vain and full of herself. People make this jump nowadays, it's one of those approved moves: somebody (in this case the director) points to her non-racist track record, and therefore that person is accused of wanting special praise. But maybe the director just wants recognition of a fact. Most of us know that judging bias is a matter of calls, with this fact and that fact to be taken into account. People say the director has done something racist; she has this piece of context that she wants them to look at.

“Victim” came up. The professor said the theater director was playing the victim because the director's statement talked about the horror and humiliation she felt. French Canadians mistreated blacks, the professor reminded us. The director couldn't be the victim if blacks were involved. It was like there was a battered tin bowl called victimhood, and the professor saw the whole business as a fight over that bowl.