Race-based controversy over the new hire plays out in a predictable way. 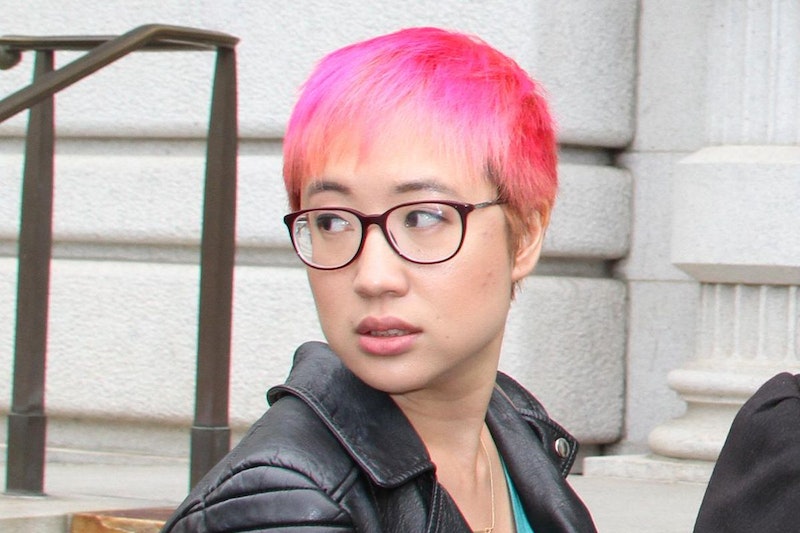 On Thursday, The New York Times’ hired Korean-American Sarah Jeong, a Verge tech writer and the author of The Internet of Garbage, to join its editorial board. The way this works is that the Times makes the hiring announcement, and then political operatives quickly set about scouring the new hire’s social media for incriminating evidence. When the Internet sleuths hit paydirt, as they did this time, everyone scrambles in a scripted manner to line up along ideological lines. Depending on your political affiliation, Jeong’s slew of Internet put-downs of caucasians, including tweeting the hashtag “#cancelwhitepeople,” makes her either woke or a joke.

The BBC strives for wokeness, so after initially running a headline calling Jeong’s tweets racist, it soon capitulated to left-wing pressure by putting the word “racist” in quotation marks. The British media outlet momentarily forgot that, according to the Left’s new definition of racism, women of color can’t be racist towards white people. That’s why it’s okay for Jeong to tweet: “Dumbass f**king white people marking up the Internet with their opinions like dogs pissing on fire hydrants.” It’s interesting that she was too delicate to spell out one obscenity in a sentence so full of vitriol.

Back in February, the Times hired white woman Quinn Norton as a tech columnist, and then fired her in a matter of hours when a number of tweets viewed by some as racist and homophobic surfaced. As Jeong did when her controversy broke out, Norton tried providing context—she said she was code-switching to the language of 4chan, where the vilest epithets are routinely used for shock effect— but the Times didn’t give her the benefit of the doubt. It only responds to pressure from the Left—never from the Right.

The 30-year-old Harvard Law grad must’ve been frustrated to type that she wanted to cancel white people, and also: “White people have stopped breeding. You’ll all go extinct soon. That was my plan all along.” It should be noted that this one, which is attracting much attention, was tweeted to a single individual whose account is now suspended, not to all of Jeong’s Twitter followers. Maybe he called her, as others have, some variation of “dog-eating gook bitch” and she snapped. In her post-hire semi-apology, Jeong said she was replying to her vicious detractors by using their own vile language back at them—counter-trolling them. That’s impossible to disprove, but the Times took her at her word after declining to offer the same grace to Quinn Norton.

While the right-ring media’s up in arms over what they see as Jeong’s racism, their left-wing- echo-chamber counterparts are agitated that the Times even bothered to address the issue of its new employee’s alleged racism, suggesting that it mistreated Jeong and catered to “white fragility” by saying it didn’t approve of her tweets. Inkoo Kang, who identifies as a “writer of color,” wrote for Slate that Jeong’s tweets were “clearly jokes.” Frida Garza, on Jezebel, wrote that Jeong’s tweets were “fairly innocuous,” using this one as an example: “oh man it's kind of sick how much joy I get out of being cruel to old white men.” You have to wonder what she does to these old guys, and if they like it. Writing for Splinter News, Libby Watson made her case against the Times by conveniently including only Jeong’s most innocuous tweets, such as “it must be so boring to be white.” I don’t know about that, but it must be boring to write like Libby Watson and treat your readers like dupes.

Perhaps some of Jeong’s tweets were counter-trolling, while others were a demonstration of woke anti-whiteness, which is viewed as a bonding exercise within certain online minority communities where there’s resentment towards a power structure viewed as designed to serve white people. You blow off steam by saying things like you want white men to die, as Jeong once tweeted, but you don’t really mean it. Many of these people are quick to take offense to a perceived microaggression, but ironically they attribute any offense taken to their aggressive words to “white fragility.” They’re covered either way, which is a big part of why so many are attracted by the intersectionality movement.

Sarah Jeong’s privileged, but is still an angry person. She’s not very nice either. When British scientist Tim Hunt made a joke misinterpreted as sexist, the mob came after him and ruined his career. Jeong tweeted: ”tim hunt sad. tim hunt too sad to do science. twitter criticize him and he just start crying.” When Justine Sacco had her life destroyed by a misunderstood joke while on a plane to South Africa, she tweeted: ”What I'm getting at is that what happened to Sacco was not that bad and white America's obsession with her is deeply telling.” When Times columnist Bari Weiss got mobbed on Twitter for an innocuous tweet, Jeong’s reaction was: “Also, is there anything more tedious than media navel-gazing over "outrage mobs"? But now she expects to be defended from the mob because she’s special?

There’s a performative aspect to many of Jeong’s tweets that make them appear to be more “wokeness signalling” than actual hatred towards an entire race. Jeong came to the U.S. from South Korea at the age of three, and went on to obtain a Harvard Law degree. It’s hard to call yourself oppressed after fulfilling the American Dream, so maybe acting out on Twitter’s her attempt to gain credibility in what some call the Oppression Olympics.

The Times, which only pretends not to have a double standard, shouldn’t give in to the mob and fire Sarah Jeong—mobs should always be resisted, plus they’d already seen all the tweets before they hired her, unlike the case of Quinn Norton. Jeong appears to be their kind of tech journalist—one who’ll praise regressive leftists in the industry and label anyone calling out Silicon Valley’s PC narrative as misogynistic, racist, or transphobic. Conservatives who already despise the Times, which is sending a message by hiring Jeong soon after firing Norton for a similar offense, will have their feelings confirmed by this hire.