Japan: Change the Skin Color and It’s a Model for the Alt-Right

Accepting less than 30 refugees per year makes the nation an outlier among developed nations. 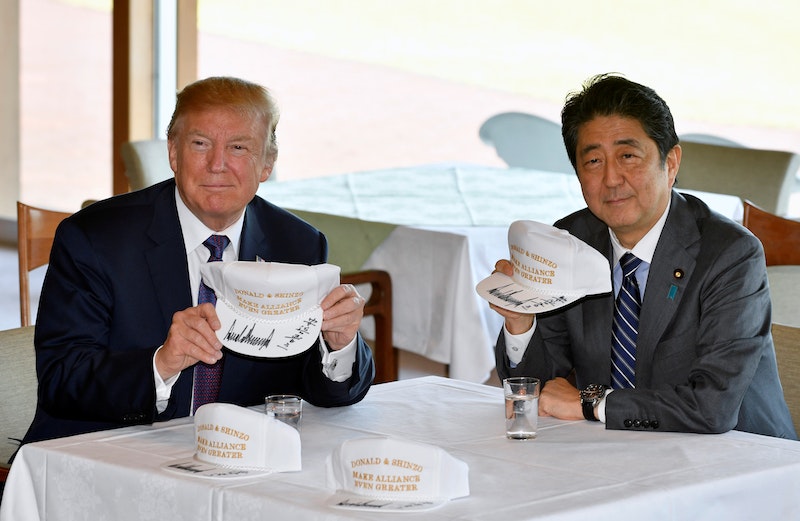 Donald Trump plays a lot of golf, maybe sometimes with the gold-plated driver that Japanese Prime Minister Shinzo Abe gave him at Trump Tower a few days after his 2016 election—the one that’s reportedly worth nearly $4000. Abe’s cozied up to the President since that meeting, staying in regular touch with him by phone. The two nationalists get along quite well, although Trump puts his Japanese counterpart in his place from time to time with such gestures as the 19-second handshake at the White House in February of last year. Abe looked like he’d just escaped a headlock when Trump finally released him.

Abe’s a Japan-First guy, so he gets Trump's America-First sloganeering, unlike some of the European leaders the President has rocky relationships with. The Japanese head of state’s no fan of the humanitarian act of taking in refugees that’s part and parcel to being a member in the community of nations. Neither he nor Trump has much of an interest in belonging to such a body, at least to the extent that it would entail obligations. Japan’s an island nation with a long history of attachment to ethnic purity, a concept Trump finds appealing. At a 2016 meeting of the United Nations General Assembly, Abe responded to pressure for Japan, which is experiencing its worst labor shortage in 44 years, to take in Syrian refugees by claiming that his nation needed to first sort out its “graying” problem and shrinking birth rate. As immigration’s the obvious solution to that set of problems, the message was that the European model of developing nations importing new workers isn't for Japan.

A European leader spelling it out like this would be immediately labeled a far-right nationalist along the lines of Geert Wilders, the Dutch politician who was once banned from entering the U.K, but Japan’s a continent away and plays by different rules. From 2015-2017, Japan—which has no official immigration policy—took in 27, 28, and 20 refugees, respectively. That’s a drastic change from when, in 1940, Japanese diplomat Chiune Sugihara saved the lives of 6000 Jewish people in Lithuania by issuing them Japanese visas.

Trump may admire Japan’s vile treatment of the would-be migrants it holds in sub-standard detention facilities, where at least 10 people have died since 2006, four by suicide. Japan doesn’t allow applications for refugee status to be filed from abroad. It must be done in person, after arriving in Japan on a difficult-to-obtain visa. As refugees typically come from strife-torn nations, they’ve often already destroyed all of their identity documents, for security reasons. Arriving in Japan without the papers that could have gotten them killed at home puts them into the limbo of the detention system.

Japan’s ethno-state hasn’t gone unnoticed by white supremacists like Americans Richard Spencer, who coined the term “alt-right,” and Jared Taylor, another leading alt-right intellectual who was born in Japan and is fluent in the language. Spencer speaks of “identitarianism,” referring to people identifying with their own race and culture,” and it’s a fairly accurate description of the Japanese mindset. This I can best illustrate with a personal anecdote. A Japanese friend of mine once traveled to Germany, and upon returning home he remarked about there being so many “gaijin” there. Gaijin is the Japanese word for foreigner, meaning that he saw these people as foreigners even when they were in their own nation.

White separatist Taylor sees a “mongrel” America and feels Japan has a better future because of its “racial and cultural homogeneity.” While American “cuckservatives” do little to oppose the multiculturalism and lax immigration policies that have led to a breakdown of civil society, Japanese nationalist politicians like Abe can pursue identitarian policies while receiving faint pushback from the public. For Richard Spencer, who dreams of a re-imagined America that somewhat resembles the Roman Empire, where the main criteria for citizenship would be whiteness, such political freedom would be a dream come true.

Spencer and his Hitler-respecting ilk long to return simpler times when whites were in charge, women stayed home, traditional values ruled, and street crime wasn’t a problem because the police handled things their own way. Except for skin color, this nostalgic Shangri-La resembles Japan, where there are very few women in the boardrooms, and the police are normally allowed to hold arrestees 23 days without charging them with a crime. During that time, they’re allowed to question prisoners in a brutal manner, which produces the many confessions behind the nation’s 99 percent conviction rate.

The Japanese corporatist-style economy and political structure suits the alt-right too. There’s a government-corporate ruling elite that shares a common background and ethos, and a single dominant party—the Liberal Democratic Party (which is in no way liberal)—that rejects globalism in favor of economic protectionism. That’s Trump’s vision of America.

Japan, with its rapidly aging population and dwindling birth rate, is headed towards a day of reckoning. Abe talks about bringing more women and older workers into the workforce, but that won’t be enough to offset the population decline. Over 25 percent of Japanese are over 65, and the last time births were lower was 120 years ago. Despite the lack of refugees, there’s been a relatively recent influx of foreigners living and working in Japan, but the Japanese tend to see this as a temporary phenomenon—a rotating workforce that’s periodically refreshed instead of a new population of permanent immigrants.

Japan’s one of the most advanced nations in the world, but its people cling to an insular and provincial mindset. It’s still very hard for many Japanese people to believe that their nation is a place where outsiders would want to move to.