The Conowingo Dam is a disaster waiting to happen. 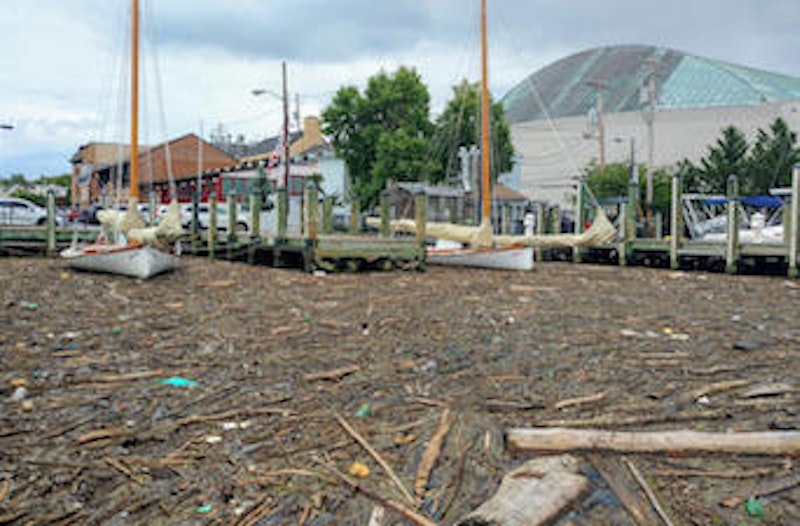 Four years ago I wrote a depressing article (“The Chesapeake Bay is Doomed”), and unfortunately I’m not here with better news. This past week brought new reports that the Susquehanna River has taken one of the most giant dumps yet on the Chesapeake Bay, what should be one of the most beautiful bodies of water in America, where I’m a kayaker, beachcomber and volunteer at a beach cleanup nonprofit organization.

The 27,500-mile watershed of the Susquehanna in New York and Pennsylvania north from us in Maryland is covered in farmland, dumping nitrogen and phosphorous and plastic and all manner of trash and debris from heavy flooding. All the trash and chemicals go into the river and pause at the Conowingo Dam, which determines how many of its floodgates to open and unceremoniously toxically shower down toxic sediment onto our watershed on a regular basis.

When constructed in 1928, the Conowingo Dam was the second-largest hydroelectric plant by power output in the United States after Niagara Falls. The creepy-foreshadowing last sentence of their Wikipedia page reads “A 1998 USGS study suggests that (the plant) may reach capacity before 2020, and cease to reduce the nutrient and sediment load hitting the bay. However, the scouring of major floods, and other factors, affect this.”

And it has. Reached capacity. The dam stores 200 million tons of sediment with 40 million tons allegedly remaining, but in 2011 Tropical Storm Lee caused a sediment bloom that turned the entire bay brown when floodwaters caused the dam to open 44 of 53 floodgates. Hurricane Agnes in 1972 saw all 53 floodgates open, and explosives were used to blow part of the dam apart to allow even more sediment and floodwaters through as a statement was released saying the “stability of the dam cannot be controlled.” What storm will it take for the 1928 structure and the hundreds of millions of sediment and floodwater behind it to finally give way?

The also-creepy-sounding corporation dam-owner Exelon’s website (which has the nerve to talk about being good neighbors because they sponsor a rockfish tournament) and admits that its Federal Energy Regulatory Commission (FERC) license expired back on September 1, 2014. Since then they’ve been operating on year-to-year licenses and trying to negotiate with the feds and states trying to get a 50-year license but they’ve run into some problems.

Gov. Larry Hogan, a Republican who tends to act more like a Democrat on issues regarding the environment, has come down like a ton of flooding lumber on Exelon, withholding certifications until the dam meets state water quality standards, and calling summits to insist that plans for dredging the dam be put in place.

The Bay Journal  reported that The Maryland Department of the Environment directed Exelon to make annual reductions of six million pounds of nitrogen and 260,000 pounds of phosphorus in the lower Susquehanna below the dam; the amount of nutrient reductions studies indicated are needed to offset the impact of the dam on water quality in the Chesapeake. If Exelon doesn’t make the reductions itself, then MDE directed it to pay in-lieu fees.

“From the beginning of our administration, we have sounded the warning on the problems caused by the Conowingo Dam,” Hogan said in a statement, adding the conditions in the state’s certification provide “a strong framework for working with the upstream states and private partners such as Exelon to take real actions to address the sediment and nutrient pollution problems caused by the dam so we can preserve the Bay for future generations.”

Exelon’s response was to sue the state of Maryland in which the dam is located, as reported in the Baltimore Sun “in lawsuits filed in federal and state courts, the company’s attorneys say it is “unreasonable for the State of Maryland to expect Exelon to shoulder the entire burden of removing excess nutrients and all trash at the end of a 464-mile river.”

Help for the state came from environmental nonprofits as the Waterkeepers Chesapeake intervened:

“The Water Quality Certification for Conowingo Dam is critical for not only the Susquehanna River, but for the entire Chesapeake Bay cleanup effort,” said Betsy Nicholas, executive director of Waterkeepers Chesapeake. “Exelon is seeking to disarm the State of one of its key tools to protect water quality in this relicensing process… we absolutely support states’ authority to protect water quality and require power companies to reduce pollution from the operation of their dams. In its lawsuit, Exelon is essentially seeking to dodge the Clean Water Act and shirk its responsibility for the pollution associated with its dam. Someone is going to have to pay to cleanup that pollution, and if it’s not Exelon it will be Maryland taxpayers. And we’re talking about a 50-year permit—if we don’t get this right, we’ll be paying for a generation.”

After the dam sent metric tons of debris down the Chesapeake this past week after recent heavy rains they fed Baltimore News station WJZ this humdinger of a nothing-statement: “As owners of the Conowingo Dam, Exelon Generation shares the concerns of the public regarding the safety and the health of the Chesapeake Bay, in particular, the amount of trash and debris across the bay. Some of the debris entering the bay comes from upstream on the Susquehanna River watershed, which spans over 27,500 square miles of New York, Pennsylvania and Maryland, and passes through the dam. Along with the 11 other rivers that feed into the bay, the Susquehanna recently experienced 10 times normal water flows and significantly more debris swept into the river and through the dam because of heavy rain. Although we seek to remove debris from the river safely and efficiently, we cannot remove all debris, especially during flood conditions. We’ve removed more than 600 tons of debris that has flowed down to the dam so far this year and will continue to do so. We look forward to continuing our work with local and state authorities to protect and restore the health of the bay.”

That’s pretty much bullshit because a) it’s not working with local authorities when you sue the state you’re located in and b) if you had worked with “local and state (and how ‘bout the feds?) authorities a little harder and hadn’t let the sediment build up to the tippy-top of the dam in the first place (like the last half century), maybe things wouldn’t be at critical mass right now, jeopardizing not only the health of the bay, but the actual physical 1928 structure of the dam itself.

Tropical storms in 1976, 1992 and 2011 have already come close to completely wiping out the dam—it’s clear that one or a series of storms could have devastating impact on the 1928 structure, causing environmental catastrophe for the Chesapeake Bay. But no one plans for a rainy day anymore, so legal battles rage on while the sediments pile up by the metric tons, probably until the dam simply bursts, destroying the entire ecosystem. And there are no state or federal safeguards in place to stop it. Studies get studied, lawsuits get filed, fingers get pointed, no real action gets taken.