The latest right-wing conspiracy theory now has a visible presence at Trump rallies. 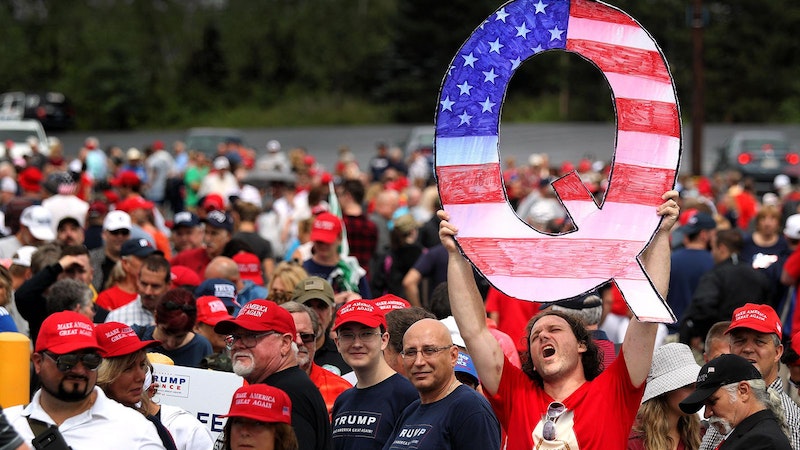 Trump supporters have been spotted holding up ”Q” signs at his rallies. That’s "Q" as in QAnon, the latest right-wing conspiracy ecosystem in which some mind-boggling postulation’s occuring. The Deep State’s involved, and the shadowy spector of the diabolical Rothschilds and the Clintons is lurking somewhere in the background. Tom Hanks and Steven Spielberg are pedophiles in the QAnon hellscape. But that’s just a taste of the madness.

QAnon’s guru is the anonymous Q, who tells his devotees he's a Trump supporter with access to highly classified material. Q hands down to his acolytes what they call “bread crumbs,” which are intelligence tidbits to be used to decipher The Storm, a reference to Trump’s cryptic statement to reporters last October as he stood among military leaders last and talked about “the calm before the storm." When a journalist asked him what he meant, Trump replied, “You’ll see.”

There are no coincidences in the QAnon parallel universe—synchronicity prevails. As Q himself put it, “Nothing is random, everything has meaning.” Things are never as they seem. Whenever Trump's attacked it's because he's closing in on the grand global conspiracy, bringing us closer to The Storm. The Storm’s the “great awakening” Q’s people talk about—what’s going to happen when Trump and Mueller catch up to the powerful degenerates plotting to rule the world and make the children their playthings. Trump and Mueller are chasing the bad guys together!

Q, who began posting on anonymous Internet message boards like 4-chan and 8-chan in October 2017, now has issued 1800 bread crumbs, many of them cryptic. Here’s an example:

Q’s imagination runs wild. On November 1, 2017, he said that John Podesta would be soon be arrested, the military would take over, and public riots would be organized to prevent the arrest and capture of more senior public officials. According to Q, Barack Obama, Hillary Clinton, George Soros and other officials are currently planning an American coup d’etat while simultaneously operating an international child sex-trafficking ring. The Hollywood elite’s in on the whole operation.

The QAnon version of reality is that the Russia investigation’s a smokescreen to cover up the fact that Mueller and Trump are secretly in cahoots to expose this global cabal. Trump pretended to collude with Russia in order to get the Special Counsel put into place. When he rails against Mueller, it’s just a ploy. Kim Jong Un’s a CIA plant, former DNC Chair Debbie Wasserman Schultz commissioned MS-13 to murder staffer Seth Rich, and Hillary Clinton and several other prominent Democrats—and even Republican John McCain—are currently wearing ankle monitors because they’re secretly being tracked before their impending arrests. Some QAnoners even believe that Trump is Q, while others are convinced it’s John F. Kennedy Jr., who they believe faked his 1999 death in a plane crash.

When Trump mentions the word “seventeen” in public, as he’s done, it means he’s talking to QAnon in code because “q” is the 17th letter of the alphabet. QAnon people see the president making “q” gestures with his hands too. When he pointed at a family raising a Q sign at one of his recent rallies, QAnon message boards lit up—POTUS was recognizing them!

An armed QAnon disciple driving an armored vehicle blocked traffic at the Hoover Dam in July, demanding the release the Office of the Inspector General (OIG) report that allegedly ties Obama and the Clintons to a sex-trafficking ring. When unstable people get their dark imaginations stoked with crazy talk about a shadow world where children are getting abused, they might be inclined to take any kind of action against it.

If the curtain got unexpectedly pulled away on Q, who knows what would be revealed? Probably it’s just a clever online troll sitting alone in a room and messing with gullible minds by orchestrating an interactive role-playing game. He knows that people love to get clues and then attempt to solve the mystery, so he makes his dopey initiates into Sherlock Holmes by giving them just enough information to go on. Q could reveal the plot all at once, but finds the steady-dribs-and-drabs approach much more amusing.

It comes as no great surprise that QAnon’s made it to the Trump campaign. Trump’s nearly as devoted to conspiracy theories as he is to mammon. He’ll have a hard time distancing himself from QAnon because he likes anyone who says nice things about him. Trump could keep all those Q signs out of his rallies if he wanted to. Their theory perfectly suits his gaffe-prone presidency too. Whenever he appears to be messing up, he’s actually not messing up. There’s no way Trump could resist that interpretation.

QAnon’s not asking the president to explicitly acknowledge them, knowing that’s not politically viable. They’re content knowing he’s signalling them on the sly. I’m guessing most of them are gun owners. Maybe one of them will even put a bullet in someone’s head before too long in service of the cause.