Times says it's all about the truth now, but not all its writers are truthful. 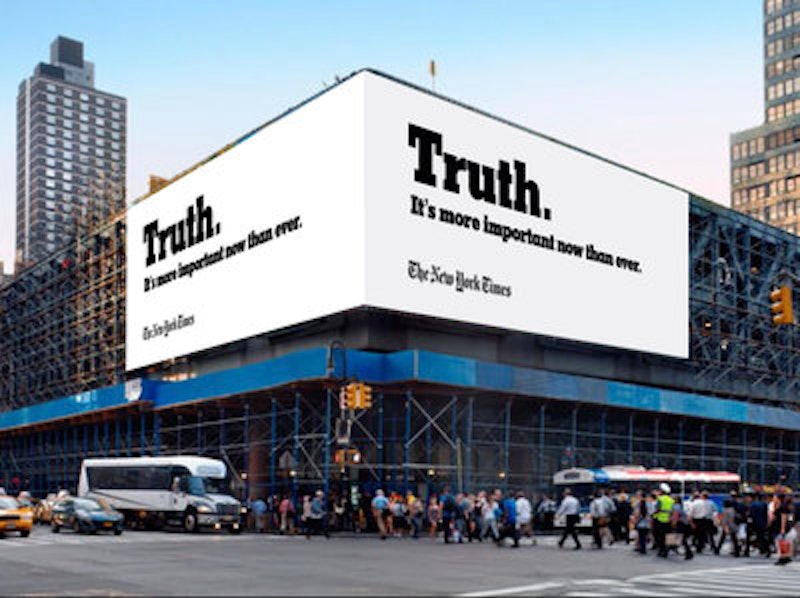 The New York Times has a new advertisement featuring a number of slogans flashing on the screen, all of them open to interpretation. The point is that while we’re inundated with talking points, the Times will deliver the truth from Manhattan. The ad concludes, “The truth is hard to find. The truth is hard to know. The truth is more important now than ever.” Nobody can argue with that. The Times should make sure its writers realize this applies to what they post on Twitter as well.

In January, Ben Rothenberg, who contributes tennis articles to the Times, saw a tweet with a clip of ESPN tennis announcer Doug Adler calling an Australian Open match. He played the video and heard Adler talking about Venus Williams’ tennis tactics. “Guerilla effect” was the phrase Adler used. Rothenberg heard “gorilla,” a rookie mistake. That’s okay, as long as nobody gets hurt, but it didn't go that way. Instead of practicing journalism—investigating and reporting—he chose to tweet, “This is some appalling stuff. Horrifying that the Williams sisters remain subjected to it still in 2017.#AusOpen.” When someone tweeted to Rothenberg that Adler was ignorant, he replied, “I don't disagree.” In hindsight, that appears as projection.

The British tabloids picked up on the “story,” The Daily Mail reported that Adler had called Venus a gorilla in their headline—that it was “disgusting beyond words.” ESPN caught wind of the racially-tinged online controversy stirred up by tiny group of online freaks and made Adler issue an apology. Then the sports network fired him. One full week later, Rothenberg tweeted that he stood by his initial reaction, yet he hadn't contacted Adler to get his side of the story. He also tweeted that he'd been around tennis long enough to hear the Williams sisters disparaged and dehumanized, but apparently not quite long enough to hear of “guerilla tennis,” a term that's been around for some time. “I can't recall guerilla being used by tennis commentators before,” he tweeted. The most famous tennis commercial ever was called “Guerilla Tennis,” a 1995 Nike ad featuring Pete Sampras and Andre Agassi playing tennis on a San Francisco street. It's surprising that Rothenberg's podcast partner, Courtney Nguyen, didn't explain the term to him. She wrote a Sports Illustrated article about guerrilla tennis in 2012.

Ironically, Rothenberg once walked in Doug Adler's shoes. After the NYT ran his article, Tennis’s Top Women Balance Body Image with Ambition, on July 10, 2015, there was blowback. Of tennis champion, Serena Williams, he wrote, “Williams has large biceps and a mold-breaking muscular frame, which packs the power and athleticism that have dominated women’s tennis for years. Her rivals could try to emulate her physique, but most of them choose not to.” Illustrating his point, he quoted WTC tour player Agnieszka Radwanska’s tennis coach, Tomasz Wiktorowski: “It's our decision to keep her as the smallest woman in the top 10 because...she's a woman and wants to be a woman.” Some wondered if the implication was that Serena wasn't a real woman.

The controversy escalated to the point where the NYT public editor chose to address it. Margaret Sullivan claimed that the writer had taken “special pains to make the story balanced and sensitive, but its critics thought he’d negatively compared Serena’s body to more slender white players. Some of them accused him of sexism and racism, while others asked why a female tennis champion’s body type is even a story, or why a man would even address the issue.”

Whether it was intended or not, people should know not to compare black people to African animals, Rothenberg told RTSport. Rothenberg himself has compared tennis star Andy Murray to a gorilla and Roger Federer to an ape. Nobody of any race wants to be compared to an ape. While these aren’t racial slurs in this context, they're disrespectful to tennis professionals. It's inappropriate language for a reporter to use.

Another Rothenberg tweet: “I've been surprised at how much I become a part of the story of Doug Adler's comment ESPN's decision to part with him, which was ESPN's own.” Coincidentally, he also said he was surprised at the reaction to his off-key Serena article, but why would a Times tennis writer be surprised that his social media comments on a racial matter could have serious consequences in this era? On the contrary, it would appear that he wanted to become part of the story.

Rothenberg invited Adler to contact him, but that's not the protocol. This tweet is the only communication Rothenberg has initiated with Adler, after the fired broadcaster had the temerity to tweet him once, using all caps: “I think if you want to sue ESPN go for it. Makes more sense than an all-caps tweet at me.” Perhaps empathy isn't his forte. Rothenberg chose not to give Adler the benefit of the doubt. But everyone deserves it, even Rothenberg himself. That’s what he thought after his Serena article was published. Adler's lawsuit against ESPN, which he's suing for wrongful termination, suggests that Rothenberg fell out of favor with the Williams sisters after his Serena article, and that his Twitter shots at Adler were intended to return him to their good graces.

Rothenberg didn't get Adler fired all by himself. But he did bully an innocent man, and became an influential member of an ignorant, vicious online mob that got its way in the end. Adler would still be in the booth if there were no Internet. As for the ESPN execs who fired Adler, knowing he'd done nothing wrong, they're gutless weasels for not defending one of their own. If Adler's case reaches a jury, they’ll be exposed for the cowards they are.

NYT’s new ad says, “The truth is we're more divided than ever.” One of the reasons this is true is that people are irresponsible on social media. They're quick to pile on someone without knowing all the facts. Rothenberg acted irresponsibly without having the facts, yet he lectures people on social media about having more awareness and sensitivity after he body-shamed a black, female athlete. He says he's willing to give Adler the benefit of the doubt, but he already missed that opportunity. Google Adler’s name if you doubt that. The way Rothenberg has treated Adler online is, to use his own words, appalling and horrifying. He now has a history of being insensitive on racial matters. If The New York Times condones this, then their new ad is just empty words.