The Miracle of Science

Can it save us from itself? 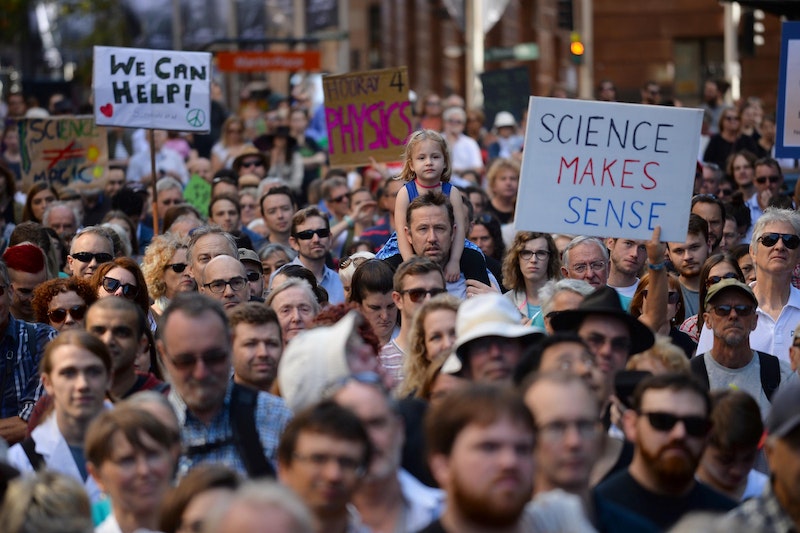 “Science” is a good thing for traumatized progressives to march for, allowing them to express their commitment simultaneously to truth itself and to the epistemic and cash-money hierarchy recognized by their kind. There were no anti-science counter-demonstrations, partly because almost everyone recognizes science as having a kind of overwhelming credibility; no one explicitly opposes it in general, even if they haven't quite accepted human-caused climate change. Many purport to think of it as the only source of truth.

"How did America rise up from a backwoods country to be one of the greatest nations the world has ever known?" asks Neil de Grasse Tyson in a video which he describes as containing "the most important words I have ever spoken." It's technology, man, which he folds effortlessly into science. As the video unspools, it shows an inspiring montage of extreme carbon-emitting activities: rockets rising into the sky, steam power from coal plants, cities aglow with incandescent light. All that's missing is the mushroom cloud... of science!

Indeed, even on Tyson's conception, science has had some really terrifying results, such as industrial agriculture and ever-new generations of weaponry. According to his view, science is now the only hope for ameliorating the conditions it has itself ushered in. As to how science stands today in relation to the objective truth, I wouldn't assume that this time around the results will stand up permanently or the effects wind up being benign. Every time they tell you what’s true, take it seriously and cock a skeptical eyebrow. Any other attitude is not compatible with science.

Tyson says that, in the 21st century, people other than himself "have lost the ability to judge what is true and what is not." The question is easy for people like Tyson: “science” is what is true, denying it or even quibbling with some particular result, is a sign not only that you probably didn't do that well on the SAT's, but that you’re irrational and evil. And since few of us are in a position to check the results of any particular research project, we must accept the deliverances of science on authority. For Tyson, the distinction between what’s true and what’s not is identical to the distinction between what people like him agree on and what they agree against. If someone “doesn't believe in science,” they’re questioning his authority and that of his ilk.

This dogmatism is incompatible with science's own self-understanding as producing provisional, challengeable knowledge. And it’s incompatible with the history of science. Think for just a moment what you would’ve been accepting if you had “accepted science” 50 years ago: what you would’ve believed about the nature of the universe (for example, that it’s in a steady state, rather than expanding), or about what food or pharmaceuticals could be safely consumed. What you’re urged today to accept without question as a badge of your goodness and rationality and your social status will quite likely be revised tomorrow. That’s what is good about science, actually.

But science was presented in those marches not only as consisting of thousands of specific assertions you’re called upon to accept, but as a token of identity. A defense of science is a defense, among other things, of academic institutions as being arbiters of knowledge and ignorance. More to the point, academics and scientists feel their funding to be under threat by the Trump administration.

I don't think the “science wars” are wars about truth. They’re wars about class, identity, and the shape of history. The real avatars of the science march were Bill Nye the Science Guy and Ms. Frizzle, the cartoon teacher from The Magic School Bus. These figures, along with Sesame Street and Barney, helped shape the consciousness of, let's say, middle-class white American kids. Nye and Frizzle spent half their time instructing and the other half enthusing about the wonders of science itself. Now they’re figures of preternatural power, battling the forces of ignorance in the streets.

It strikes me that it’d behoove us to do whatever the scientists tell us to do. They have access to biological, chemical, and nuclear agents, which they developed themselves, and the expertise to weaponize them. Watch these people bring down the Internet, if they want, or seize control of the grid. Perhaps we have focused too much on the threat of radical Islamism, and too little on the threat of rigorous scientism.